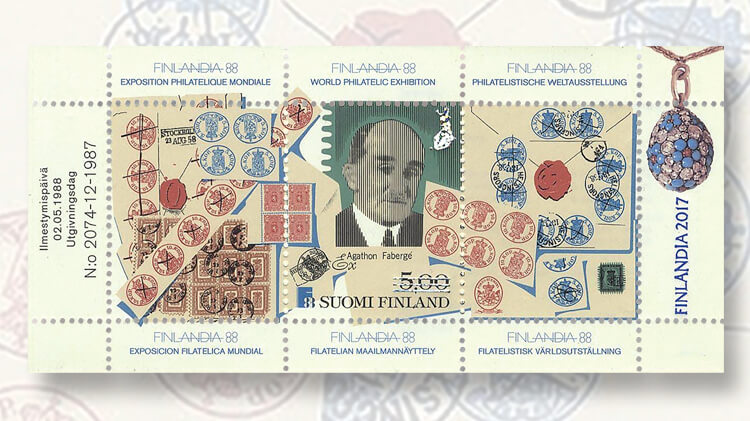 Each day of Finlandia 2017 will feature a different theme, with stamp collector and jeweler Agathon Faberge being honored on the opening day, May 24. A souvenir sheet pictures Faberge and some rarities of Finnish philately.

The 100th anniversary of Finland’s independence will be celebrated at the Finlandia 2017 philatelic exhibition to take place May 24-28 in Tampere, Finland.

Collectors from more than 40 countries will participate in this exhibition, being held under Federation of European Philatelic Associations (FEPA) patronage and with International Federation of Philately (FIP) recognition.

Tampere Hall is the main venue for the exhibition. It will house the dealer bourse, the competitive exhibits and several invited exhibits. Among the highlights is what is considered to be the most important item of Finnish philately: a cover franked with four pairs of the 1856 5-kopeck oval (Scott 1), from the collection of Gustaf Douglas.

The Finnish Postal Museum, part of the museum center in Tampere, will host an exhibit of items from the royal collection of Queen Elizabeth II in conjunction with Finlandia 2017.

Each day of the exhibition will have its own theme: jeweler and philatelist Agathon Faberge (May 24), Finland’s independence 100th anniversary (May 25), Tampere (May 26), the Moomins and families (May 27), and the postal museum and Postcrossing (May 28).

Finland’s post office, Posti, will issue several stamps at Finlandia 2017, including a booklet with a souvenir sheet honoring the exhibition and Faberge (1876-1951). The sheet contains a single stamp picturing Faberge and some of the rarities of Finnish philately. More philatelic items are shown on two labels in the sheet.