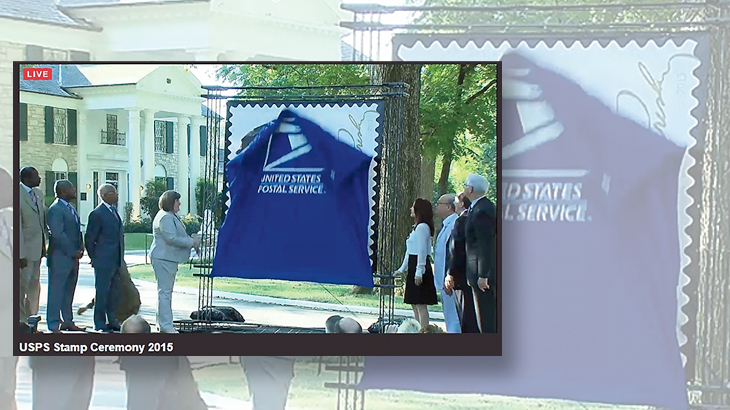 The first-day ceremony for the new Elvis Presley stamp was broadcast live on the Internet from Graceland mansion in Memphis, Tenn. Postmaster General Megan Brennan and Priscilla Presley pull the drapery off an enlargement of the Elvis stamp.

On a beautifully sunny Wednesday morning in Memphis, Tenn., hundreds of Elvis Presley fans young and old convened on the front lawn of Graceland mansion for the Aug. 12 first-day ceremony for the Elvis Presley commemorative forever stamp.

Hundreds more watched the event as it was streamed live from Graceland.com and the United States Postal Service.

The event began shortly after 8 a.m. Central Time with an introduction from Kevin Kern, public relations director for Elvis Presley Enterprises in Memphis.

Following the performance of the national anthem by the Memphis Army Recruiting Honor Guard and an invocation by Pastor Quintin R. Smith of Historical First Baptist Church of Millington, Elvis Presley Enterprises CEO Jack Soden welcomed the crowd at Graceland.

“You have no idea how much we appreciate that you’re here,” Soden said.

Soden introduced Postmaster General Megan Brennan, who spoke about the reasons for issuing a new stamp honoring the man known as the King of Rock ‘n’ Roll.

“Today we honor a man,” she said, “not the image, not the aura, not the phenomena — we’re here to honor Elvis Presley, a very human and real person who shook up the world of music and left an indelible mark on the culture of our country and, in truth, on musical culture worldwide.”

Brennan, along with Priscilla Presley and other ceremony guests, then unveiled the enlargement of the stamp image, with the entrance to the mansion as a backdrop.

Priscilla Presley, introduced by Kern as “the steward of the Elvis legacy,” spoke next. Priscilla was married to Elvis Presley from 1967 to 1973. She began by explaining that their daughter, Lisa Marie Presley, was out of the country and therefore unable to attend the ceremony, but that she wanted to send along her greetings and thanks to the crowd in attendance.

Priscilla Presley reminisced about Elvis and their life at Graceland, but then turned her attention to the stamps that have honored Elvis.

“As you know, he loved Graceland, but to have a stamp named after him, not just once, in 1993, but twice, here we are in 2015; I’ll never forget how we all felt, and the excitement when it was announced that we were having a stamp for him at that time.”

Presley also expressed her admiration for the design of the stamp and thanked Postmaster General Brennan.

“I think it’s so appropriate that it’s named a forever stamp, because as you know Elvis Presley will be forever in our hearts, to not just all of us here, but to millions of fans and people all over the world.”

She ended by encouraging everyone to use the stamp, because “it’s forever,” she said with a laugh.

During the ceremony, a new arrangement of the Elvis Presley song If I Can Dream was played for the crowd, from a new Elvis compilation CD that is being sold by the Postal Service, and from a second CD, If I Can Dream: Elvis Presley With the Royal Philharmonic Orchestra, that will be released this fall.