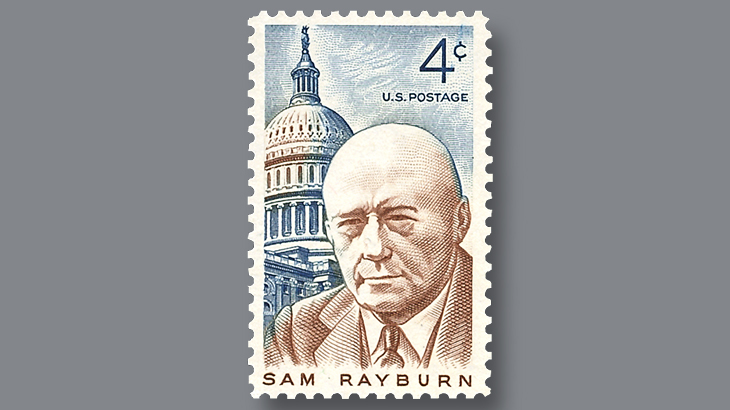 The United States Post Office Department commemorated Sam Rayburn, a Democrat from Texas who served as speaker of the House for 17 years, on this 4¢ stamp issued Sept. 16, 1962. 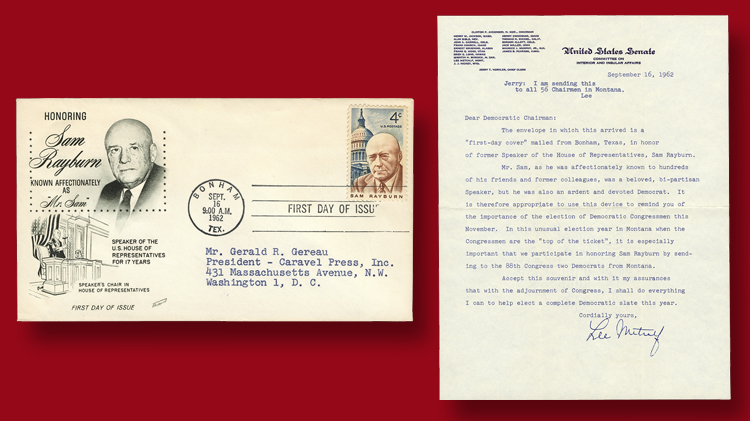 Senator Lee Metcalf (D-Montana) used the occasion of the release of the Sam Rayburn stamp to energize the 56 Montana County Democratic Party chairmen in anticipation of the upcoming congressional elections. The first-day cover Metcalf sent to the chairmen
Previous
Next

No term was imposed on this designation, so Metcalf retained it until he died in office in 1978. He was the only person to hold this title.

If not a stamp collector, Metcalf must have been at least philatelically aware. The proof is the first-day cover, and the letter that accompanies it shown with this column.

As a fellow Democrat and former member of the House of Representatives, Metcalf wanted to send the FDC to the Democratic Party chairmen in all 56 of Montana’s counties, and to a few friends in the media.

The letter is an artful combination of the philatelic with an overtly political appeal:

“The envelope in which this arrived is a ‘first-day cover’ mailed from Bonham, Texas, in honor of former Speaker of the House of Representatives, Sam Rayburn.

“Mr. Sam, as he was affectionately known to hundreds of his friends and former colleagues, was a beloved, bi-partisan Speaker, but he was also an ardent and devoted Democrat. It is therefore appropriate to use this device to remind you of the importance of the election of Democratic Congressmen this November. In this unusual election year in Montana when the Congressmen are the ‘top of the ticket,’ it is especially important that we participate in honoring Sam Rayburn by sending to the 88th Congress two Democrats from Montana.

“Accept this souvenir and with it my assurances that with the adjournment of Congress, I shall do everything I can to help elect a complete Democratic slate this year.

Apparently there was no problem in his using his Senate stationery for blatantly political messages.