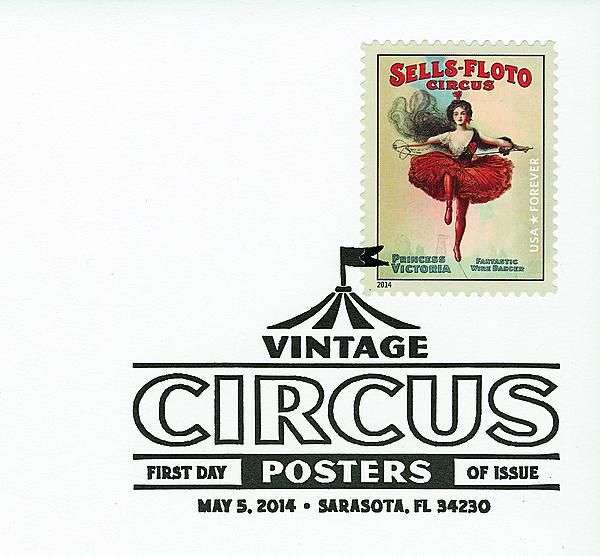 The official first-day city’s postmark on one of the eight United States Vintage Circus Posters commemorative forever stamps issued May 5 in Sarasota, Fla.

Just like mainstream stamp collecting, first-day cover collecting has its own jargon. This is particularly true in the United States, where U.S. Postal Service guidelines allow more latitude for creating FDCs than collectors find in other countries.

This is the first column of two that will look at the terminology that is important in FDC collecting.

The cachet is the design on the FDC envelope that usually enhances or amplifies the subject of the new issue. Traditionally, cachets take up about 40 percent of the left side of the face of the envelope, but there is no hard and fast rule.

A blank cachet is a common term, but it is really an oxymoron. The phrase refers to an unserviced cacheted envelope that doesn’t bear any new issues and isn’t struck by any postmark.

Servicing refers to the process of affixing the new stamp or stamps to an envelope or card and then submitting it to the postal authority for cancellation. In some countries, the postal agency must also affix the new stamps.

A first-day city is the city or town where the new issue first goes on sale. Often, the city has a connection to the issue, such as Sarasota, Fla., for the Vintage Circus Posters commemorative forever stamps issued May 5. A first-day cancel from that event is shown nearby. Sarasota is home to The Ringling, a museum of the circus and more. Sarasota was also the winter headquarters of the Ringling Brothers circus.

From the early 20th century to the beginning of this one, U.S. stamps and postal stationery usually went on sale in one city, or occasionally a handful of cities, before they were available in others. Today, the designation is largely ceremonial, and the stamps are supposed to go on sale in every post office on the first day of issue.

The official first-day city’s postmark is often abbreviated as FDOI for “First Day Of Issue,” the wording of the standard nonpictorial postmark used since 1937.

An unofficial FDC is a first-day cover canceled in a city or at a post office other than the one designated as the “official” first-day city. This variation is often abbreviated as UO, though in truth the phrase used should be “unofficial city.”

Today, when any and all U.S. post offices are supposed to put new issues on sale on the designated issue date, unofficial FDCs take less work to create. The new issues might not have to be transported from the first-day city to the “unofficial” city.

Locations not chosen as the official first-day city may choose to have special postmarks or ceremonies of their own. These postmarks are called first day of sale or FDOS.

The official first-day city’s postmark on one of the eight United States Vintage Circus Posters commemorative forever stamps issued May 5 in Sarasota, Fla. Collectors sometimes refer to this by the abbreviation “FDOI,” for first day of issue.