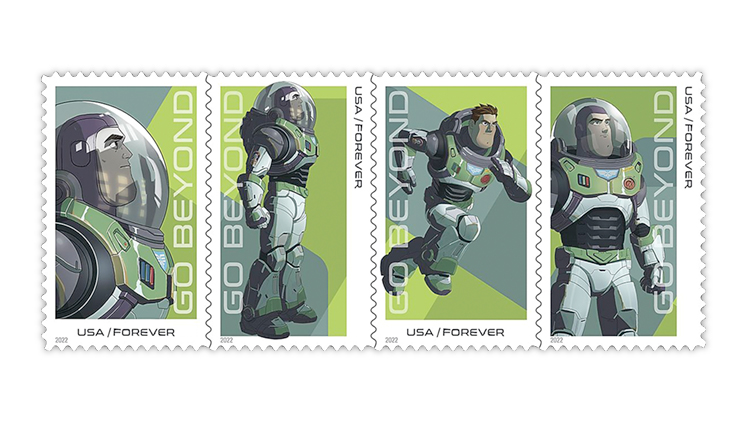 The United States Postal Service announced Aug. 3 as the first day of issue for its Go Beyond stamps featuring images of Buzz Lightyear, according to a June 21 press release.

A first-day ceremony will take place Wednesday, Aug. 3 at 9 a.m. at the El Capitan Theatre, 6838 Hollywood Blvd., in Hollywood, Calif.

The ceremony is free and open to the public. Those interested in attending can respond online.

The Go Beyond stamps feature Buzz Lightyear, who is known for his roles in the Toy Story movie franchise from Disney and Pixar.

Buzz Lightyear is also the star of the feature film Lightyear, which was released June 8, 2022, at the El Capitan Theatre and June 17 nationwide.

“The sci-fi action-adventure movie gives audiences insight into Buzz’s past and brings to the big screen the intergalactic exploits of the hero,” the USPS said.

The stamps will be issued in panes of 20 with four different designs arranged in four horizontal rows of five. Greg Breeding designed the stamps using illustrations from Pixar Animation Studios.

Beginning July 3, preorders for the Go Beyond stamps can be made online.