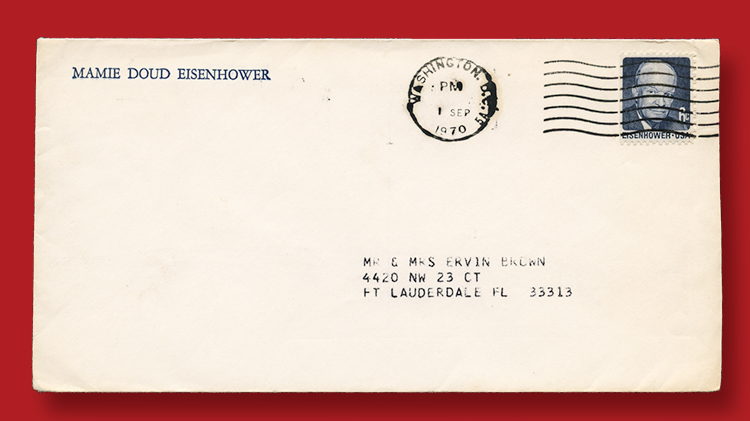 Presidential widow Mamie Eisenhower had the franking privilege when this envelope was sent in September 1970, but because the content was a political message, it would have been inappropriate to use it for this mailing. 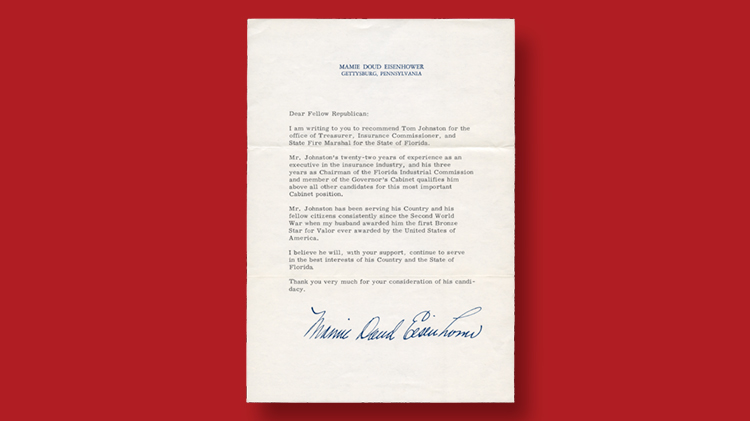 The letter enclosed in the 1970 Mamie Eisenhower envelope above promoted the candidacy of Tom Johnston for political office in Florida.
Previous
Next

Mamie Eisenhower as the widow of a United States president had franking privileges in September 1970 when the cover shown nearby was sent.

Why didn’t she use this franking privilege? I assume it was not because she had a burning desire to use the 6¢ Dwight David Eisenhower stamp on the envelope. (The stamp was issued Aug. 6, 1970, a little more than one year after the president’s death on March 28, 1969.)

No, the reason becomes clear when the letter enclosed is read:

“I am writing to you to recommend Tom Johnston for the office of Treasurer, Insurance Commissioner, and State Fire Marshal for the State of Florida.

“Mr. Johnston’s twenty-two years of experience as an executive in the insurance industry, and his three years as Chairman of the Florida Industrial Commission and member of the Governor’s Cabinet qualifies him above all other candidates for this most important Cabinet position.

“Mr. Johnston has been serving his Country and his fellow citizens consistently since the Second World War when my husband awarded him the first Bronze Star for Valor ever awarded by the United States of America.

“I believe he will, with your support, continue to serve in the best interests of his Country and the State of Florida.

“Thank you very much for your consideration of his candidacy.”

Because this letter is a political appeal, use of the frank would have been inappropriate.

The evolution of franking: different ways to indicate postage was paid