First Latvian issues made good use of German army castoffs 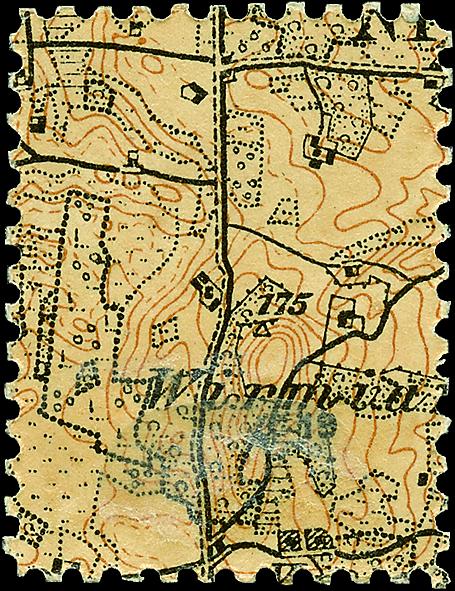 Because of wartime paper shortages, the first stamp issues of Latvia from 1918 were printed on the backs of German maps. 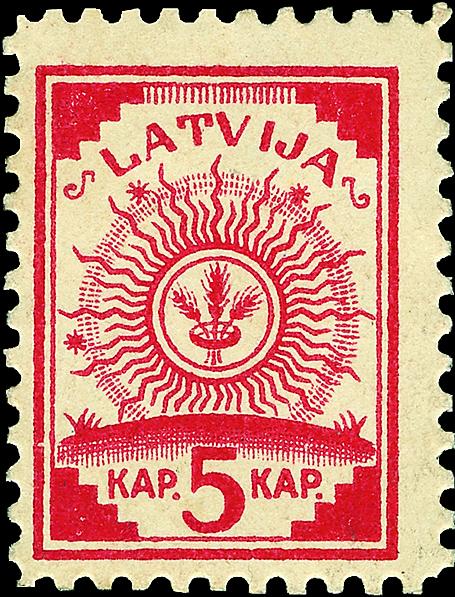 Recycling was a matter of practical necessity long before the word was coined and assumed its modern connotation of environmental good practice. A case in point is the first stamps of Latvia, issued Dec. 18, 1918 (Scott 1 and 2).

This small Baltic state declared itself independent of the Russian Empire on Nov. 18, 1918, amid the devastation following World War I.

Ansis Cirulis (1883-1942), a Latvian painter and graphic artist, was selected to design the first postage stamps of the new sovereign state.

The two new stamps had the same value (5 kapeikas), color (carmine) and design, based on the nation’s coat of arms, which featured a historic Latvian motif of the sun as a symbol of statehood. Three stylized ears of grain are surrounded by the rays of a rising sun, with three tiny stars unevenly spaced in the rays.

During WWI, depictions of the sun in national imagery used 17 rays for the number of districts self-identified as Latvian. The three stars in the coat of arms (and on the stamps) symbolized three historic districts included in the new republic. The country name appears as “Latvija,” in the native language.

In keeping with the multitude of acute postwar shortages, postal officials had no supply of new good-quality paper on which to print stamps. What they did have, however, was a trove of maps of the Baltic region prepared for the German general staff and abandoned when the defeated German army fled the country.

According to an article by Frank L. Browne in the April 1950 issue of the S.P.A. Journal, there were 79 different German military maps of the regions of Latvia, Lithuania and Poland, and at least 62 (depicting southern Latvia and northern Lithuania) are known to have been used for stamp printing. The backs of the stamps may contain black or black and brown map printing, or be blank if the paper was from margins of the maps.

A website by researcher Bill Apsit says that Schnakenburg Printing Works in Latvia’s capital, Riga, printed the stamps by lithography in sheets of 228 (12 rows of 19). The map paper had no watermarks. Apsit reports that printing receipts survive for 11,956 sheets of stamps, a mixture of imperforate sheets (Scott 1) and perforated sheets (Scott 2, perf 11½).

Latvia’s first issues literally and figuratively have “a story behind the stamp,” and specialist collectors have reconstructed large sections of the maps by assembling the appropriate stamps.

It is up to the individual collector whether to mount Latvia Scott 1 and 2 face up or face down in one’s album.

The Scott Classic Specialized Catalogue of Stamps and Covers 1840-1940 differentiates slightly between stamps having brown and black, black only, or no map printing on the reverse, but examples of both issues average only a few dollars in any condition — a bargain for fairly common stamps backed with an uncommonly interesting history.