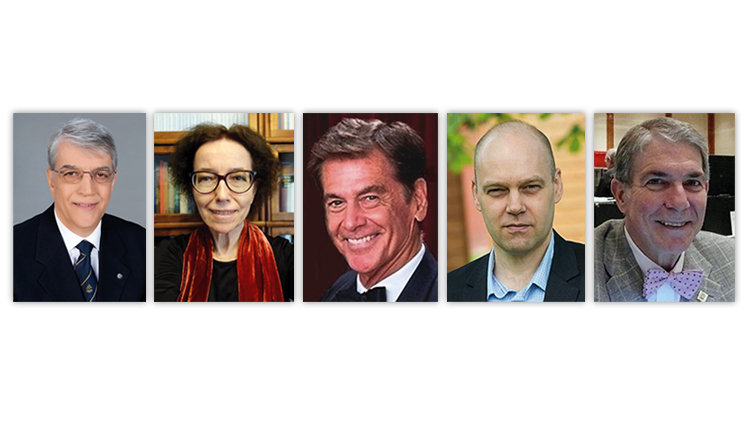 Denes Czirok of Hungary, Seija-Riitta Laakso of Finland, Jose Ramon Moreno of Spain, Henrik Mouritsen of Denmark and Randolph “Randy” Neil of the United States have been invited to sign the Roll of Distinguished Philatelists. The signing ceremony is sched

Five accomplished philatelists have been invited to sign the Roll of Distinguished Philatelists, according to a March 15 press release from the Federation of European Philatelic Associations.

The board of election for the Roll of Distinguished Philatelists unanimously agreed at its annual meeting held March 4 to invite Randolph “Randy” Neil of the United States, Denes Czirok of Hungary, Seija-Riitta Laakso of Finland, Jose Ramon Moreno of Spain and Henrik Mouritsen of Denmark.

The invitation to sign the Roll of Distinguished Philatelists is the highest and most prestigious of honors in philately. Those who sign the roll are recognized for achievement, research, publication and service in many areas of philately.

The roll was instituted in 1921, and the signature of King George V appears at its head as the first signatory. Its design contains the names of 42 “fathers of philately,” great philatelists who would have been invited to sign had they been alive at the time. The initial 39 signatures were added at the first ceremony in Harrogate, England, in May 1921.

This year’s signing ceremony, on the occasion of the 100th anniversary of the first signatories to the roll, is scheduled to take place Sept. 24 at the Crowne Plaza Hotel in Harrogate during the Philatelic Congress of Great Britain. Attendance at the ceremony is open to all.

The five new signatories join 85 other living signers of the roll from 25 countries spread over six continents. A total of 356 philatelists from 40 countries have signed the roll, according to the Association of British Philatelic Societies.

Neil is one of the best-known names in American philately. As editor and publisher of numerous philatelic magazines, he has been a prolific writer on subjects ranging from classics to modern. Always an enthusiastic exhibitor, he was the author and publisher of the Philatelic Exhibitors Handbook, first published in 1987 and now in its third edition.

He has been webmaster and graphic designer for several societies and exhibitions. In 2006 he was editor and founder of American Stamp Collector and Dealer magazine. Since 2015 he has served as managing editor of Stamp Collector’s Quarterly.

Neil’s collections are equally varied, covering many areas of U.S. stamps and postal history. His interests include the 1883 2¢ Washington, the Presidential series of 1938, and postal history of World War II in the Pacific.

Neil was president of the American Philatelic Society from 1993 to 1997 and received the 2000 John N. Luff award for distinguished service to the APS. He was a co-founder of the American Association of Philatelic Exhibitors and served as its first president. He has received numerous awards for contributions to philately in the United States.

Czirok combines a deep knowledge of Hungarian philately with a willingness to share it. His numerous books cover areas of postal history within Hungary, the postal card and cancellations. He has written a wide range of articles in several languages, including English and German, and was editor of the Postal History Journal in Hungary for many years. He has formed significant exhibits of Hungarian-related postal history covering the 18th and 19th centuries that have received high awards both nationally and internationally.

A leader within organized philately, Czirok has arranged a number of symposia within Hungary for the Federation of European Philatelic Associations. Also he is a qualified postal history judge for the International Federation of Philately (FIP) and chairman of the Hungarian commission of judges and has served as a commissioner at numerous philatelic exhibitions.

She has exhibited in five different classes: postal history, thematic, open, picture postcards and literature, receiving high awards nationally and internationally. Her exhibit “Paris by Night” garnered numerous awards, including the Lee medal in 2020 for the best paper presented to the RPSL.

Laasko is also a qualified judge at the Nordic level and an accredited judge for the APS in the United States. She has served on the thematic commission of the FIP and has been secretary-general of the Philatelic Federation of Finland.

Moreno has worked tirelessly at the organizational level of European and international philately for more than 20 years. Until late 2019, he was president of the Federation of European Philatelic Associations, working with European federations and globally in the development of philately and organization of exhibitions.

In November 2019, he was elected honorary president of the Federation of European Philatelic Associations. His contributions have been recognized in many countries. His honors include receiving the Spanish government’s gold medal of philatelic merit.

Moreno is the author of Thematic Philately: Analysis and Research, published by the Royal Hispanic Academy of Philately. His articles have contributed to the development and understanding of thematic philately, particularly within Spanish-speaking countries. Ramon’s thematic collections span a range of sports-related subjects, including yachting, skiing and golf.

His six-volume work Danish Postal History 1875-1907 is based on more than 23,000 pages of information from official sources. It is the definitive bilingual (Danish and English) study of the postal rates and regulations for this period and includes the Universal Postal Union regulations for all types of mail during the first 32 years of the UPU’s existence.