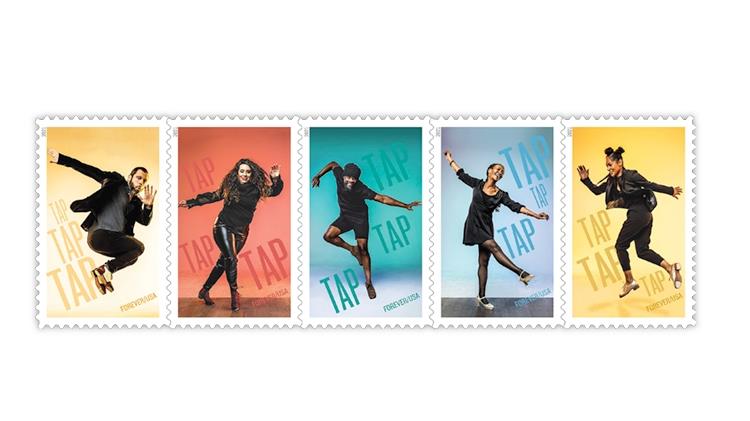 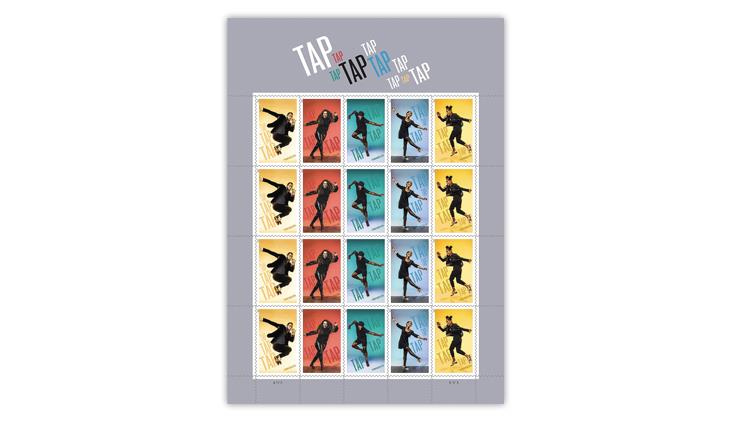 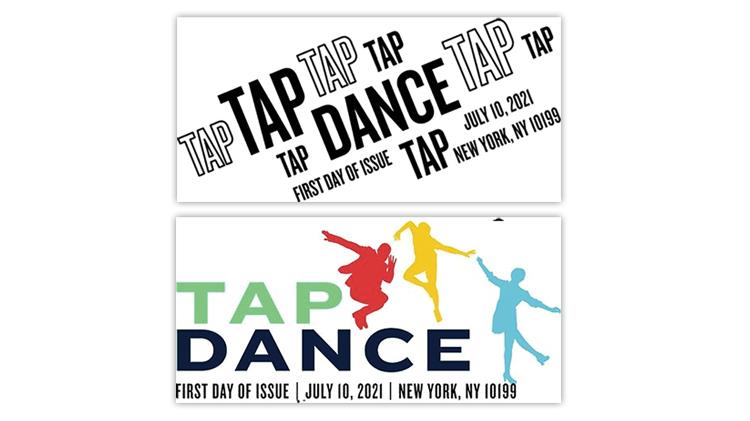 The U.S. Postal Service designed two pictorial first-day cancels to welcome the new Tap Dance stamps, one in black and the other in multiple colors.
Previous
Next

With a new set of five forever stamps, the United States Postal Service is celebrating tap dancing, describing it as “a uniquely American contribution to world dance.”

The nondenominated (55¢) stamps in a pane of 20 will be issued July 10 in New York City and will be sold in post offices nationwide on the same day.

Ceremony participants will include John Barger of the USPS board of governors, Tony Waag of the American Tap Dance Foundation, and stamp photographer Matthew Murphy.

A tap dance performance will precede the ceremony, beginning at 11:30 a.m.

Ceremony details and registration can be found online.

The new stamps will be available for purchase at the USPS retail mobile truck located on the corner of 46th Street and 7th Avenue, according to the Postal Service.

Each stamp shows a recent photograph by Murphy of an individual dancer. Each is engaged in a different dance move, dressed in black or dark clothing and portrayed against a background of color.

In a Feb. 18 article for Dance magazine, Lisa Traiger identified the five dancers as Max Pollak, Michela Marino Lerman, Derick K. Grant, Dormeshia, and Ayodele Casel (as shown on the stamp pane from left to right).

Judging by the publicity image of the stamps released by the Postal Service, no attempt was made to alter the appearances of these prominent living dancers.

Although the Postal Service has long followed a guideline that prohibits honoring individuals on postage stamps during their lifetimes, it also issued a set of 20 stamps in 2013 that reproduced photographs of numerous living British actors from the Harry Potter film series (Scott 4825-4844).

In her Dance magazine article, Traiger wrote: “Because postal regulations prohibit honoring a living person on any stamp, these dancers honor tap as representatives of the art form. Despite being stars in the dance world, they are unnamed on their stamps.”

Each stamp includes the word “TAP” printed three times, reading up at an angle alongside the featured dancer.

The stamps are arranged on the pane of 20 with each stamp in the same position in each of the four horizontal rows. The stamps are bordered by a gray margin that repeats the word “TAP” 10 times across the top, with the word in each instance positioned at the same angle as it appears on the stamps.

To learn more about these stamps and the history of tap dance, subscribe to Linn’s Stamp News.