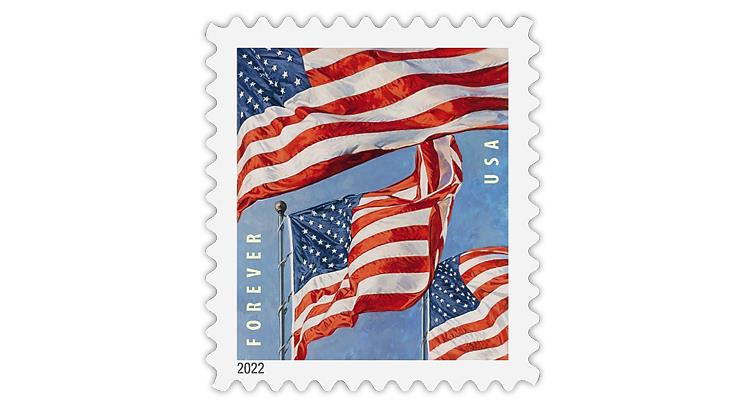 This new U.S. Flags design will be featured on nondenominated (58¢) stamps to be issued Jan. 9. 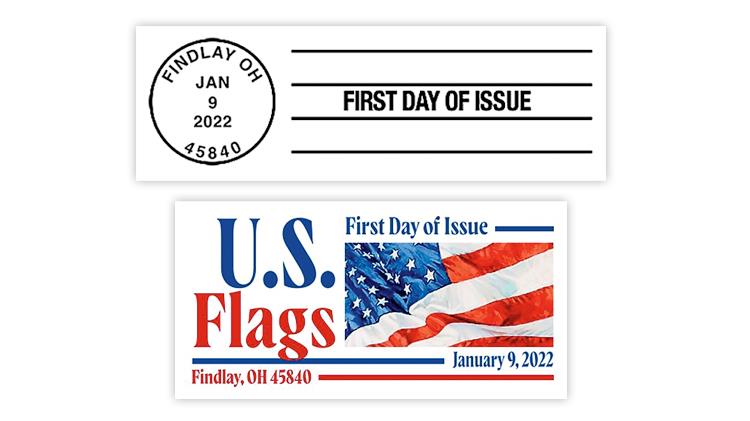 First-day cancels dated Jan. 9 in Findlay, Ohio, have been prepared in black and in full color for the U.S. Flags stamps.
Previous
Next

Findlay, Ohio, known as “Flag City, USA,” gets the nationwide honor of being the issuance city for the U.S. Flags forever stamps to be issued Jan. 9.

The U.S. Postal Service revealed the new nondenominated (58¢) stamp design in November 2021. That design will be issued in seven announced varieties on Sunday, Jan. 9. The issue date coincides with a rate-change day, but the first-class letter rate is not changing.

The Postal Service’s current contract printers, Ashton Potter and Banknote Corporation of America, each printed one of the double-sided panes and one coil of 100 variety.

A locally held first-day ceremony in Findlay is possible, but no headquarters ceremony is planned.

The city of Findlay says that the Flag City, USA designation was inspired by Findlay resident John B. Cooke in the 1960s, adding that “through a community-wide effort, spearheaded by the Women’s Division of the Chamber of Commerce, the City of Findlay was named the Flag Capital of the United States on Flag Day, June 14, 1968 … Findlay, Ohio, was officially declared ‘Flag City, U.S.A’ on May 7, 1974, by House Joint Resolution #1003, introduced by Congressman Tennyson Guyer.”

Laura Stutzman was the designer and illustrator of the U.S. Flags stamps, and Ethel Kessler served as USPS art director.

“The stamp art is a painting of three flags in a circular formation, reminiscent of the 50 flags encircling the Washington Monument,” the USPS said in the Dec. 2 Postal Bulletin. “The artist used three separate photographs of the same flag taken seconds apart as reference and stitched together the images into a single composition.”

According to technical details published by the Postal Service, the plate numbers on the new U.S. Flags coil stamps will appear on every 31st stamp in coils of 100 and every 27th stamp in coils of 3,000 and 10,000.

Although all of the stamps share the same design, the size and placement of the microprinting on the stamps will likely aid in identification.

The Postal Service has published separate item numbers for collectors to use for the two coils of 100 and the two double-sided panes. The USPS item numbers for the different products are provided in Linn’s 2022 U.S. Stamp Program.

USPS spokeswoman Sara Martin told Linn’s that these product numbers “will be honored for one year allowing collectors to obtain both.”

She added that after that Stamp Fulfillment Services “will combine the stock to 683604 and 740404, no longer honoring requests for specific printer.”

The item numbers have also been added to the Linn’s 2022 U.S. Stamp Program, along with numbers for smaller strips from the large coil rolls.

Collectors can also inquire at local post offices after the stamps are issued Jan. 9, but no automatic distribution is planned for the stamps, so it could be a while before the new design appears in post offices.

Coils of stamps are usually wrapped with a leader strip that might identify the printer as either APU or BCA. Plate numbers on the coil stamps from the two printers will show the same letter-number combinations as the double-sided panes.

The style of artwork on the new stamps might look familiar to stamp collectors. Four paintings by Stuzman also appeared on A Flag for All Seasons forever stamps issued in 2013 in multiple formats (Scott 4766-4785, 4796-4799).

The Postal Service has prepared two first-day cancels for the new U.S. Flags issue. The black postmark is applied free to most collector-submitted covers. It is a traditional four-bar cancel from Findlay with the words “FIRST DAY OF ISSUE.”

A full color pictorial postmark is also available. Text at left on the postmark reads “U.S. Flags,” and a cropped image of one of the flags from the stamp design is shown on the right.

The color postmark can be obtained by collectors on envelopes constructed from laser-safe paper. There is an order minimum of 10 envelopes with a fee of 50¢ per postmark. The USPS Postal Bulletin provides additional ordering information.

Both postmarks are also applied to first-day covers manufactured and sold by the Postal Service.