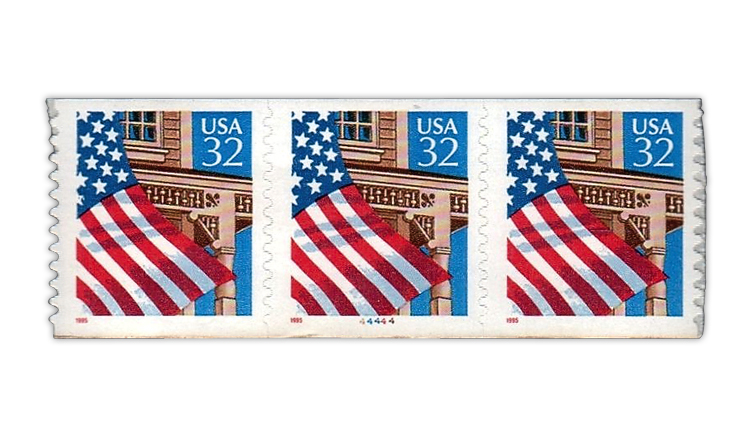 This first example of plate No. 44444 on the United States 32¢ Flag Over Porch coil stamp die-cut gauge 10.9 (Scott 2915C) was certified by the American Philatelic Expertizing Service in November as a plate strip of three.

The United States Flag Over Porch definitive stamps of 1995-97 don’t disappoint with the potential of research and the level of specialization a collector can dive into.

And even years after the stamps were issued, discoveries are still being made.

The example shown here was recently brought to my attention as the editor who handles modern U.S. stamp issue listings for the Scott catalogs.

The American Philatelic Expertizing Service (APEX) issued a certificate for this strip of three Flag Over Porch stamps on Nov. 19, 2020.

Why is this special? This stamp was issued at a time when the Bureau of Engraving and Printing was experimenting with die-cutting types used for self-adhesive stamps. The 2021 Scott Specialized Catalogue of U.S. Stamps and Covers includes an extensive article by specialist John W. Himes that provides details of all the varieties that collectors can search for.

One could speculate that the BEP switched out die-cutting mats around the time the final number 4s were being produced and very few coils with that plate number exist.

The conventional format for plate number strips is five stamps for a single stamp design with the plate number in the center. The only known example of plate No. 4444 for Scott 2915C, however, was submitted for expertizing as a strip of three.

Either way, it is an interesting discovery and perhaps other examples will turn up. But be certain to have that perforation gauge in hand because plate No. 44444 is plentiful on Scott 2915A.

In the pages of Linn’s in December and January, we published articles and letters to the editor about delivery-time issues plaguing the U.S. Postal Service.

We received so many phone calls in December about missing issues of Linn’s that we ran out of the backup supply we use to send replacement copies.

However our customer service and editorial teams continue to receive emails from customers reporting that their copies of Linn’s arrived late. Other reports mention as many as four issues landing in a mailbox at the same time.

I wish we had control of the situation, but unfortunately once an issue of Linn’s is printed and in the hands of the Postal Service, there is nothing we are able to do.

I hope that the timeliness of mail delivery returns to normal soon.