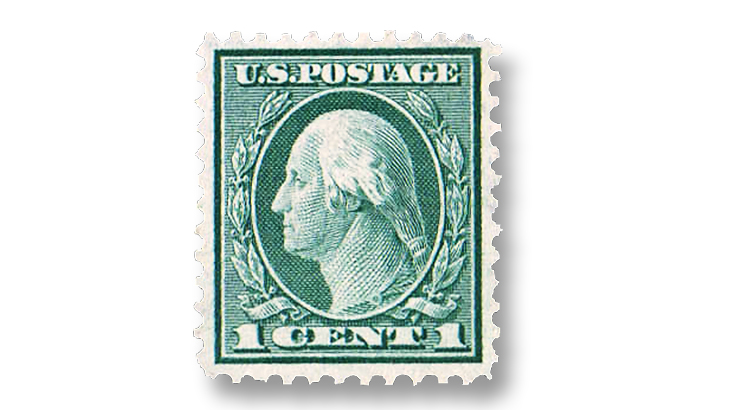 An example of the United States 1923 perf 11 1¢ green rotary press sheet waste stamp will be offered at auction by Daniel F. Kelleher during the firm’s Dec. 18-20 Flagship sale.

A 20th-century American rarity is among the featured stamps and covers in the Dec. 18-20 Flagship sale from Daniel F. Kelleher Auctions.

More than 100 lots consist of zeppelin flight covers from around the world.

Australian States are featured in a second session on Tuesday, and the offerings include a used example of the 1879 2-penny lilac (mauve) error of color from Western Australia (Scott 31a). Described as well centered with marvelous color, the stamp is struck with a clear Jan. 28, 1879, Perth circular datestamp.

The 2019 Scott Classic Specialized Catalogue of Stamps and Covers 1840-1940 values the used error at $17,500, listed in italics to identify the stamp as an item that can be difficult to value accurately.

The U.S. stamp selection starts out with postmasters’ provisionals and 19th-century classics from the 1847 issue to the 1898 Trans-Mississippi set.

The U.S. 20th-century material opens the Thursday session and includes an example of the 1923 perf 11 1¢ green rotary press sheet waste stamp (Scott 544). This stamp is described as unused without gum, and has been graded very fine 80 with a 2018 Professional Stamp Experts certificate.

Another scarce modern U.S. stamp variety is offered in the form of the 1979 perf 12 15¢ John Paul Jones stamp (Scott 1789B), never hinged, with attached bottom margin and plate number in black.

The auction concludes with U.S. back-of-the-book, including Confederate States and possessions.

The catalog for the Flagship sale can be viewed online, with online bidding options available.