Collecting flawed stamps is an ideal way to start collecting 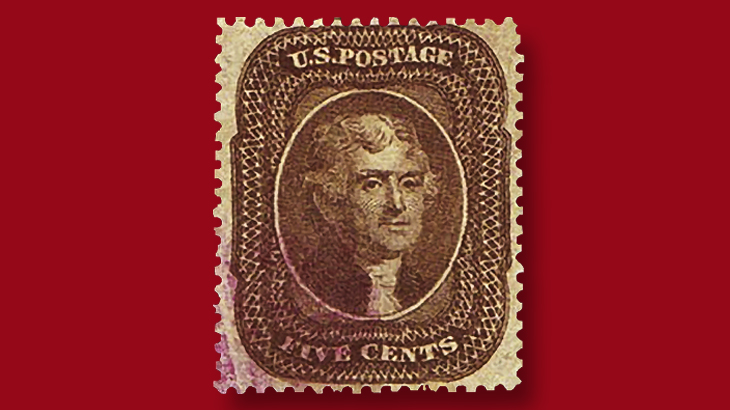 A closer look at the United States Scott 30 stamp from the expertizing certificate.

One of the benefits of having a stamp or cover expertized goes beyond whether it is genuine as claimed. In reviewing a patient, the expertizer makes that determination, but will also note any flaws or alterations of genuine material. Those observations will be included in the certificate that results, as shown in the Professional Stamp Experts certificate for a U.S. Scott 30, the 1861 5¢ orange brown Thomas Jefferson stamp type II.

The PSE certificate states that the stamp “is genuine unused, no gum, with FAKE CANCEL, and REPERFORATED at right.”

Keep in mind that Scott 30 is one of the few stamps that has a catalog value higher for used ($1,400 in italics in the 2018 Scott Standard Stamp Catalogue) than mint ($1,200); thus the reason for the fake cancel on this example.

This sort of certificate prompted Linn’s reader Bill Baab to write in with the following question: “There is a nationally known stamp dealer who advertises early U.S. stamps ‘with minor imperfections.’ My feeling is that I don’t want to buy any stamps that are torn, have thins, are creased, missing perfs, etc. To me, condition is everything. Do you have any thoughts on this?”

My answer is that, first and foremost, one of the glories of stamp collecting is that each of us gets to define the parameters of our collecting, both as to subject and condition. That said, I believe that the poor relations of stampdom need a home, too. We can’t all afford the most pristine of examples for our albums.

So I will buy a bargain stamp with minor imperfections to fill a space I might not otherwise ever be able to fill at full price.

One day if I hit the lottery, I’ll replace all the imperfect stamps. In the meantime, I’m buying for enjoyment, not investment; and I’d rather have an example that is imperfect than no example.