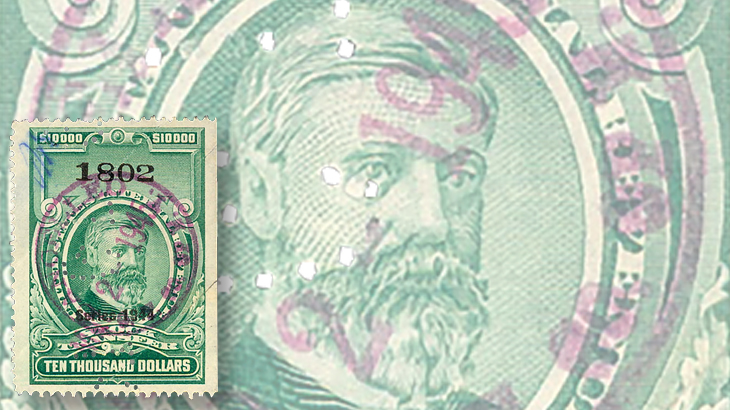 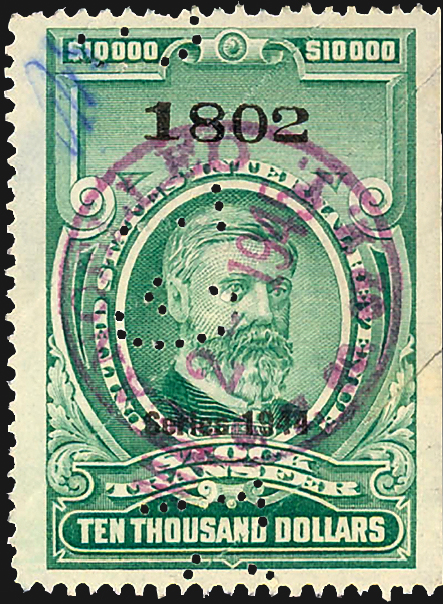 This $10,000 stock transfer stamp picturing W.Q. Gresham sold for an impressive $38,350 during the June 30 Kelleher sale of the Fleischmann collection of United States revenue stamps. 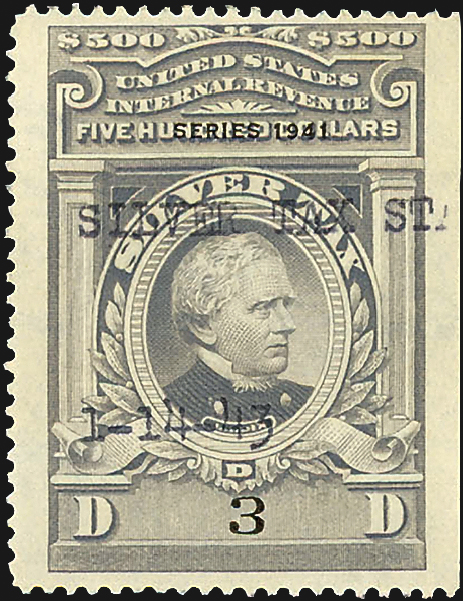 Only three examples of the $500 gray J.A. Dix silver-tax stamp of 1941 are known to exist. This example, part of the Fleischmann Family United States revenue collection, sold for $30,680 at the June 30 Kelleher sale. 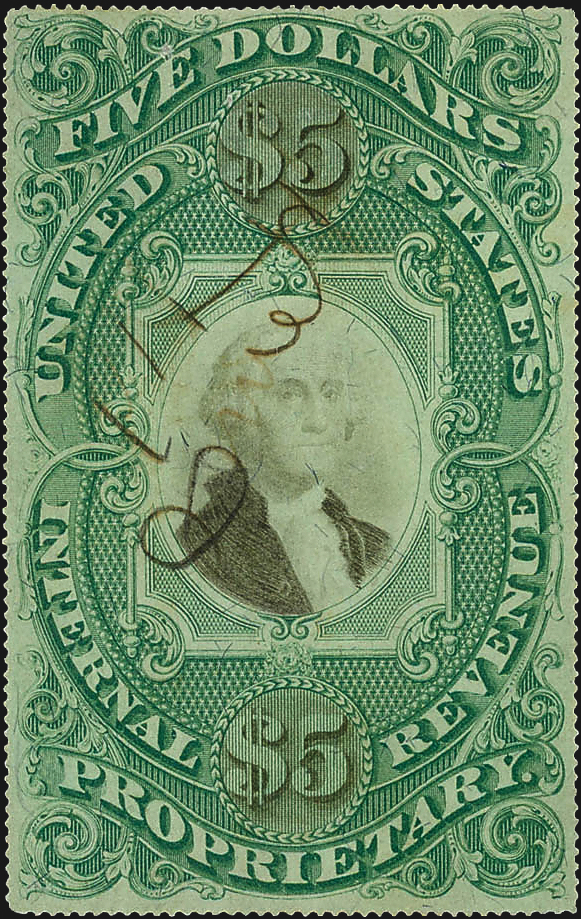 Printed on a variety of violet-tinted paper called intermediate paper, this 1873 $5 green-and-black proprietary revenue stamp realized $18,880 at the June 30 Kelleher sale of the Fleischmann collection. Until recently, this stamp was believed to be printed on the scarcer green paper.
Previous
Next

The firm of Daniel F. Kelleher held a sale June 30 in its Danbury, Conn., gallery of the Fleischmann Family collection of United States revenue, private-die proprietary and telegraph stamps.

The collection was formed over three generations by one of the prominent families of Cincinnati, the founders of the Fleischmann Yeast Co., whose innovations in commercial production of yeast revolutionized bread baking in the United States.

Adhesive revenue stamps were issued by the U.S. government beginning in 1862, when the demands of the Civil War were weighing on the Treasury.

The United States still had no income tax, and funds were raised by taxing everything from legal documents to matches and medicines (although not, apparently, yeast).

Private firms could have the government print tax stamps from dies of the firms’ own design, and many of these are wonderful miniature examples of the engraver’s art, vividly illustrating the rich variety of American enterprise in the second half of the 19th century.

While many of the taxes were repealed within a few decades, some — along with the stamps needed to pay them — continued until after World War II.

Some of the top realizations went to rare examples of stock transfer tax stamps from the 1940s.

The portrait on the bright green $10,000 stamp overprinted “Series 1944” (Scott RD185C) is of Walter Q. Gresham, onetime secretary of the treasury, secretary of state, U.S. circuit judge, postmaster general, Civil War hero and Republican presidential candidate (not in that order).

It seems a pity that a man who served his country so tirelessly should now be so completely forgotten by all but a few philatelists.

The example of Scott RD185C in the Fleischmann Family sale has a socked-on-the-nose purple date-stamp, a small manuscript cancel, perfins, two staple holes and several scoring lines that don’t quite cut the paper (cutting was a typical form of cancellation for revenue stamps).

As if in honor of all those marks of service, the stamp exceeded its upper estimate to fetch an impressive $38,350, including the 18 percent buyer’s premium that Kelleher adds to all lots. It is one of only two surviving examples known.

One of the prettiest of the private-die stamps was a 1¢ vermilion stamp on silk paper, printed for the New York Match Co. (Scott RO137b).

Despite typical poor centering and small faults, which six of the eight reported examples have, this one sold for $5,310.

Other lots were more affordable: An old Scott album page showing the complete third issue of U.S. revenues (Scott R134-150) in mixed used and unused condition — a veritable gallery of exquisite two-color engravings from the heyday of the art form — went for $472.

The Fleischmann sale also included a cautionary tale about what can happen when philatelic experts change their minds over time.

The stunningly ornate $5 green-and-black proprietary revenue stamp of 1873 is found on a variety of violet-tinted papers (Scott RB10a) as well as on green paper (RB10b).

The Scott Specialized Catalogue of United States Stamps and Covers notes that one of the varieties of violet paper “is grayish with a slight greenish tinge, called ‘intermediate’ paper by specialists. It should not be confused with the ‘green’ paper, which is truly green.”

The example in the Fleischmann collection, which is well-centered with a small manuscript cancel and only the most trivial of tiny faults, was accompanied by 1991 certificates from both the Professional Stamp Experts firm and the Philatelic Foundation, describing it as being “on green paper.”

However, a 2015 certificate from the Philatelic Foundation reconsiders that identification, now calling the stamp a variety of RB10a on intermediate paper — which, being less rare, is valued by Scott at just $11,000.

This stamp had been auctioned in 2008 as part of Robert Cunliffe’s collection of U.S. revenues. Then, it fetched $97,850 including premium.

Now reclassified, its realization in the Fleischmann sale was $18,880 — an expensive reduction for a stamp otherwise considered “one of the rarest and most desirable stamps in all of United States philately.”