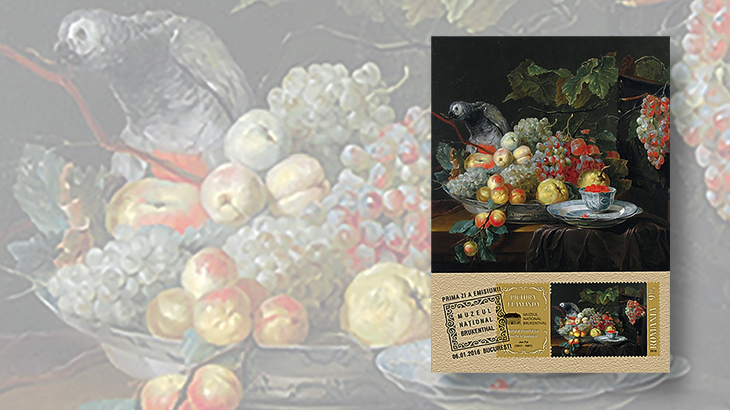 One stamp in Romania’s “Love Art! The Brukenthal National Museum” set reproduces Still Life With Fruits and Parrot by the Flemish baroque painter Jan Fyt. The stamp is shown here on a maximum card from Romania’s philatelic bureau, Romfilatelia. 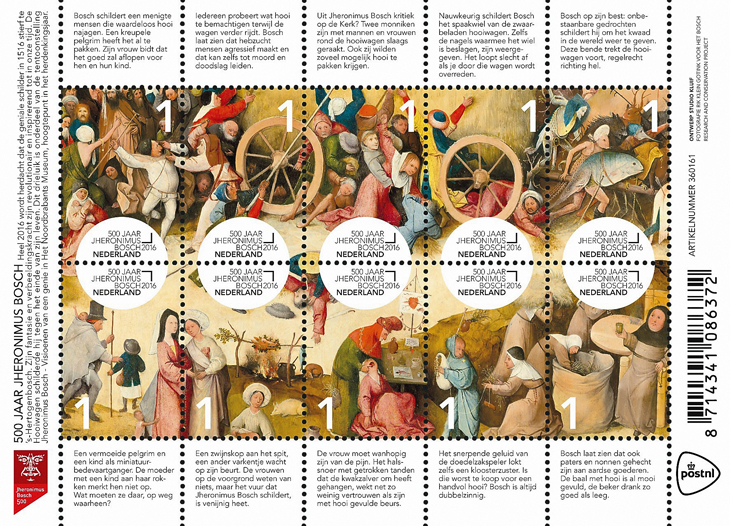 The Netherlands issued a pane of 10 stamps showing The Haywain by Hieronymus Bosch. The labels explain the scene that is depicted on each stamp. 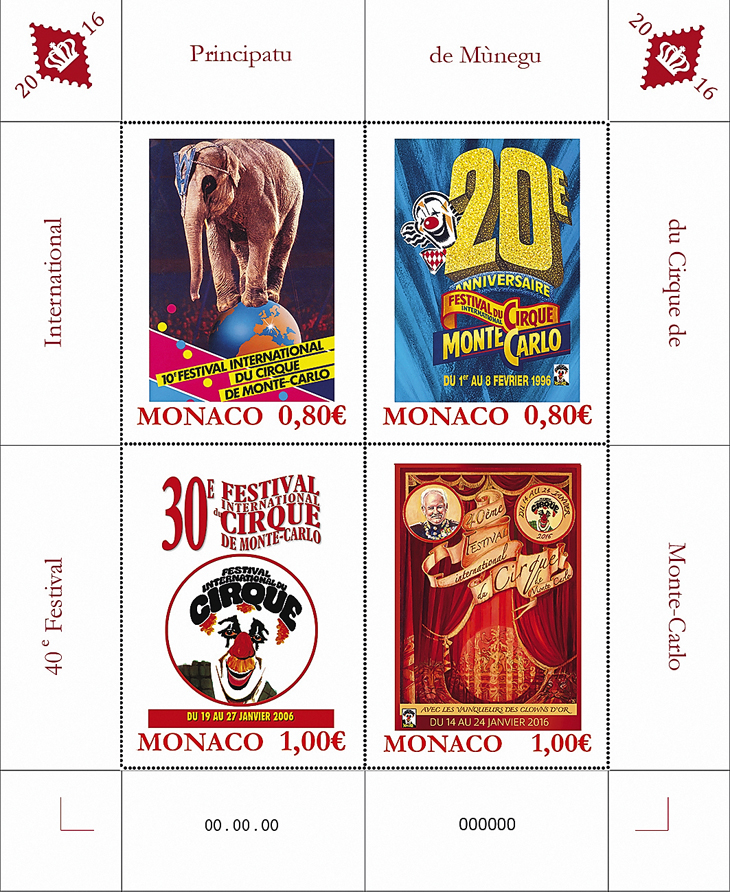 Four decades of circus poster art are displayed on a souvenir sheet from Monaco. The sheet of four stamps was issued Jan. 5 to commemorate the 40th anniversary of the International Circus Festival of Monte-Carlo.
Previous
Next

Located in Sibiu, this museum was opened to the public in 1817 in Brukenthal Palace. In addition to art galleries, the complex includes museums of history, natural history, pharmacy and hunting.

The museum is named after Baron Samuel von Brukenthal (1721-1803), who collected paintings and other works of art. He had Brukenthal Palace built while he was serving as governor of the principality of Transylvania between 1777 and 1787.

Mihai Vamasescu designed the stamps. They were printed in sheets of 20 and in panes of five stamps and label. Romfilatelia also offered first-day covers and maximum cards. The cards feature the same paintings as shown on the stamps.

A pane of 10 se-tenant (side-by-side) stamps issued Jan. 5 by the Netherlands reproduces the central panel of The Haywain, a triptych painted by Hieronymus Bosch shortly before his death in 1516.

The painting, which belongs to the Prado Museum in Madrid, Spain, was loaned to the Museum Boijmans Van Beuningen in Rotterdam, the Netherlands, for its “Uncovering Everyday Life: From Bosch to Bruegel” exhibition, held from Oct. 10, 2015, to Jan. 24, 2016.

In a press release announcing the exhibition, the museum described the painting: “ … a procession of people walks behind a haywain, a metaphor for materialism, straight into hell. In the foreground we can see medieval scenes with drunken monks, teeth-pullers, merry musicians and fortune-telling gypsies. A pair of lovers sits atop the haywain, an angel and a demon on either side: existing and new traditions come together.

“The Haywain is one of the first paintings in art history to depict everyday scenes. Painters in subsequent generations made these scenes the main subjects of their paintings. In his work Jheronimus Bosch showed worlds his contemporaries had not thought possible. His characteristic panels and triptychs, full of illusions and hallucinations, extraordinary monsters and nightmares, present an unequalled picture of the major subjects of the time — temptation, sin and accountability.”

The painting will become part of another exhibition, “Jheronimus Bosch: Visions of Genius,” to be hosted by the Noordbrabats Museum Feb. 13 to May 8.

Both the exhibition and the pane of 10 stamps mark the 500th anniversary of Bosch’s death.

As an aid in interpreting the painting, the Netherlands PostNL included brief explanations about the 10 scenes shown on the stamps on labels that surround them.

Cartor printed the stamp pane by offset in a quantity of 180,000 panes.

A souvenir sheet from Monaco displays the art of the circus poster.

The sheet was issued Jan. 5 to commemorate the 40th International Circus Festival of Monte-Carlo, held Jan. 14-24.

Established by Prince Rainier III of Monaco in 1974, the festival has grown to become one of the world’s largest and most prestigious.

For the first edition of the festival, Monaco issued a set of seven stamps Nov. 12, 1974, showing human and animal circus performers (Scott 920-926).

The four stamps in the new souvenir sheet depict the posters advertising the 10th, 20th, 30th and 40th festivals, designed by Alain Andre, Ramel and Studio Bazzoli. The first two stamps are denominated 0.80, and the other two are 1 stamps.

The poster for the 40th anniversary shows a theater curtain with images of Prince Rainier and a clown at the top and lions at the bottom.

Monaco’s Office des Timbres reports that Princess Stephanie, who organizes and presides over the festival, requested that the souvenir sheet be issued.

Also issued on Jan. 5 was an €0.80 commemorative featuring the circus poster created by Elena Zaika for the fifth New Generation Circus Festival. This circus competition for young artists will take place Jan. 30-31.