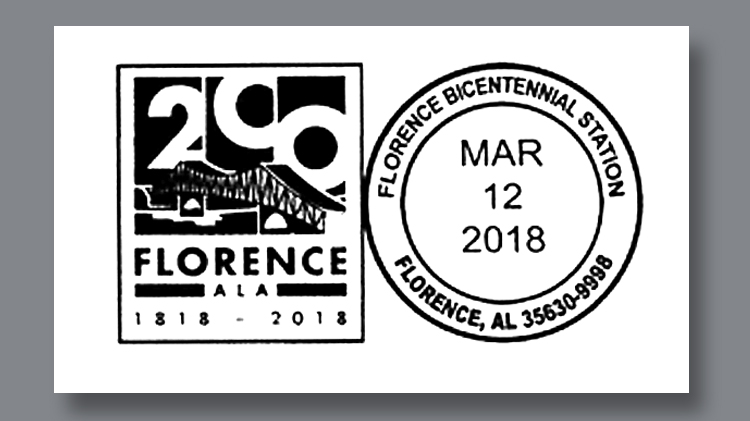 The March 12 Florence, Ala., pictorial postmark features the logo developed for the bicentennial.

A new pictorial postmark honors of the city of Florence, Ala., as it celebrates its 200th birthday. The postmark features the bicentennial celebration logo with its depiction of the O’Neal Bridge.

The city of Florence kicked off the festivities by placing a historical marker in the center of its downtown district on March 12, the date of its founding in 1818, and the date of the new postmark.

The marker details how the city came to be and the people responsible for its organization.

According to the city’s website, Florence was surveyed for the Cypress Land Co. in 1818 by Italian engineer Ferdinand Sannoner, who named it after the famous capital of Tuscany, Italy.

Located on the banks of the Tennessee River, Florence is situated in the northwestern part of Alabama in the area known as the Shoals.

Florence’s events are part of a three-year celebration called Alabama 200, recognizing Alabama’s formation as a territory in 1817 and its statehood in 1819.

According to www.alabama200.org, the jubilee “is a chance to celebrate our place in each of the 67 counties that stretch from the Shoals to the shores. It is a moment to remember the people who made our state and to nurture the generations who will carry us forward.”

For more information about the Florence, Ala., events, visit their website.