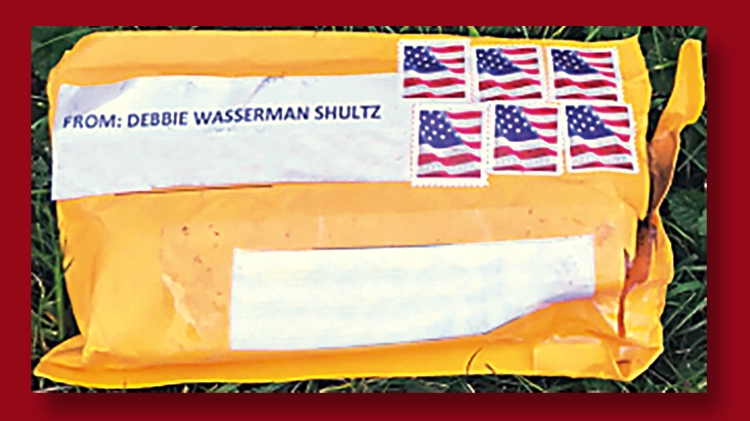 The Florida man who mailed 16 improvised explosive devices last year to prominent political figures and a news organization has been sentenced to 20 years in prison.

The individuals who were the targets of the mailings are all Democratic political figures or prominent supporters of liberal causes.

The FBI and the U.S. Postal Service successfully recovered all 16 packages, none of which detonated. The misspelled name and address of U.S. Rep. Debbie Wasserman Schultz were printed on a return address label affixed to each of the parcels intercepted.

Sayoc was arrested in Plantation, Fla., by the FBI on Oct. 26, 2018, less than five days after the first mailed device was recovered. He pleaded guilty March 21 to 65 felony counts.

Photographs of the mailed parcels published by CNN and also released by the FBI show a manila envelope franked with six Flag forever stamps of the design issued in January 2017 (Scott 5158-5162). The self-adhesive stamps are arranged three across and two down.

At least one parcel was flagged as postage due. A large envelope with irregularly shaped contents weighing more than 4 ounces and up to 8 ounces would be assessed $3.75 postage for USPS first-class package service in October 2018. The six forever stamps, each with 50¢ postage value at that time, totaled $3.

Manhattan U.S. Attorney Geoffrey S. Berman said: “Cesar Sayoc assembled and mailed explosive devices to high-ranking officials and former elected leaders to incite fear and to terrorize his victims. Though thankfully no one was hurt by his actions, Sayoc’s domestic terrorism challenged our nation’s cherished tradition of peaceful political discourse.”

CNN reported that at his sentencing hearing Sayoc expressed remorse for his actions.