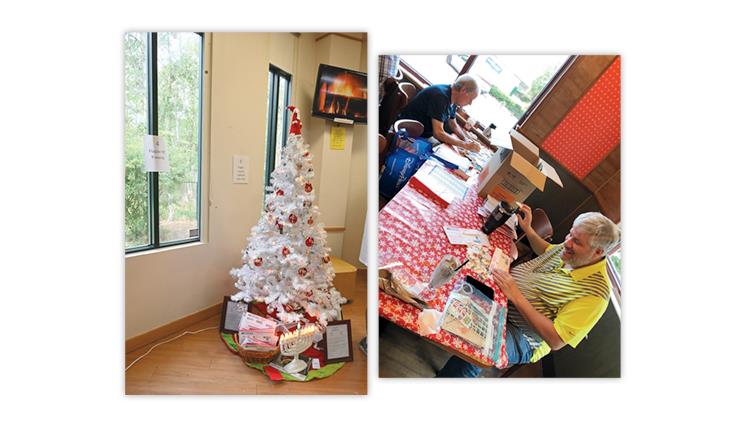 The Flagler County Stamp and Coin Club sorted stamps for and put together packets of stamps to place under this decorated tree at the local library. 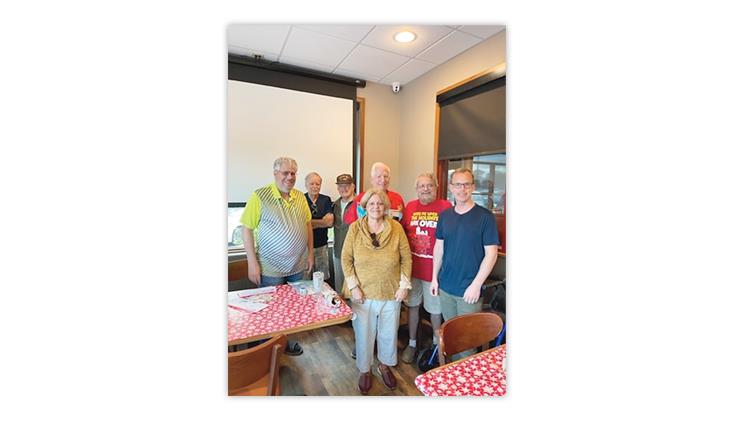 Linn’s editor-in-chief Jay Bigalke with some Flagler County Stamp and Coin Club members at a December event.
Previous
Next

In early December, I traveled to the Daytona Beach, Fla., area to attend the Florex stamp show in nearby Deland. Florex is a two-day (Dec. 2-3) World Series of Philately show held at the Volusia County Fairgrounds.

There were approximately 30 dealers in attendance, and I enjoyed my time visiting with the dealers, exhibitors and stamp club members. I was pleasantly surprised to see a number of youths at the stamps table at the show. I could tell that they were finding treasures for their collections.

On the first day of the show, I flew under the radar for a couple of hours, but I think my name was recognized on the registration list and a few sought me out. I enjoyed our conversations, and they led me to yet another event after the show was over.

The Flagler County Stamp and Coin Club of Palm Coast, Fla., reaches out to Linn’s annually seeking donations for its various programs.

One of its outreach efforts is at a local library that displays Christmas trees decorated by nonprofit groups to promote their organizations. The Flagler club puts together packets of used stamps to place underneath its tree for those interested in learning more about the hobby.

My visit to the area didn’t coincide with one of the club’s meetings. However, several members also play bingo together, and I was able to visit briefly on my way to the airport.

Shown nearby is a photograph that the club shared of its decorated tree and a photo I snapped of members stuffing envelopes before playing bingo.

I also am proud to say that I am an honorary life member of the club, and it was nice being able to finally put faces to the names I have seen for years on mail sent to the office.

The club is in continued need of used and unused stamps from the United States and around the world for use in its youth programs and other events.

The club is a 501(c)(3) nonprofit and will provide tax receipts on request. To learn more about the club, which meets frequently, visit online.