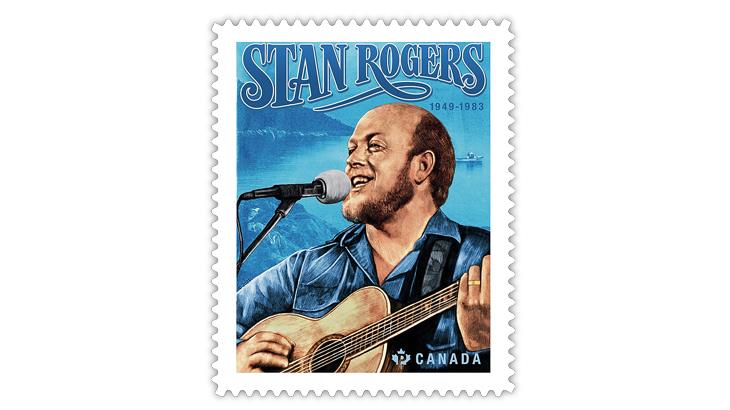 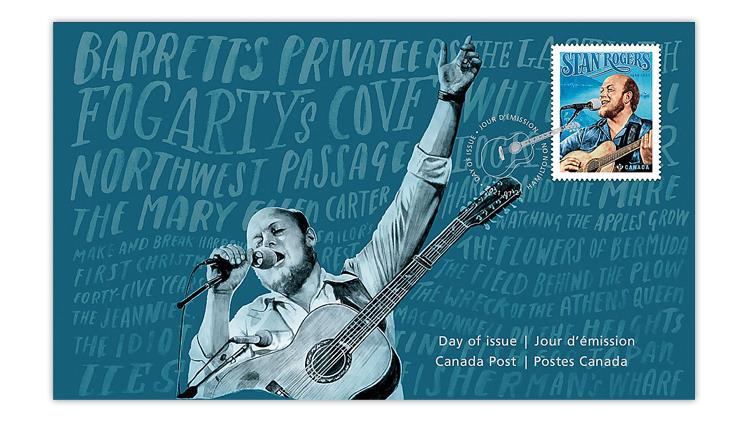 The overcall cachet on Canada Post’s first-day cover for the Stan Rogers stamp lists the titles of some of his songs in a wavelike pattern.
Previous
Next

A new stamp from Canada Post remembers singer-songwriter Stan Rogers. The permanent-rate stamp is being issued July 21 in a booklet of 10.

“When Stan Rogers took the stage, guitar in hand, his presence was electric. Standing six foot four, with a deep, rumbling voice that rose and fell like waves on a Nova Scotia shore, he poured his heart and soul into every word he sang. Poetry set to music, his ballads laid bare the lives of the sailors, ranchers, miners and others whose stories had captured his imagination,” Canada Post said in the June-July issue of its Details magazine for collectors.

The stamp, designed by Steven Slipp and illustrated by Peter Strain, shows Rogers singing and playing guitar in the foreground and a view of Fogarty’s Cove in Nova Scotia in the background.

These images are based on photographs.

The performance image is from a photo taken by Paul Coates at the Calgary Folk Festival in the early 1980s, and the view of Fogarty’s Cove is based on a photo by Darren Calabrese. Rogers’ first album, released in 1976, is titled Fogarty’s Cove and includes a song of the same name.

The cover of another album, Between the Breaks … Live, recorded and released in 1979, inspired the lettering of Rogers’ name at the top of the stamp, according to Canada Post.

Completing the design are the years of Rogers’ birth and death, 1949-1983, inscribed below his name on the right, and the country name and a maple leaf image in the lower right.

The maple leaf has the letter “P” inside of it, indicating that the stamp pays the basic domestic letter rate (currently 92¢).

Rogers was born Stanley Allison Rogers, Nov. 29, 1949, in Hamilton, Ontario. While he was raised in Ontario, he spent his summers in Nova Scotia.

Rogers taught himself to play guitar at age 5, performed at coffeehouses in his teens and began his professional career in 1969.

According to his biography on the website of the Canadian Songwriters Hall of Fame (www.cshf.ca), Rogers gained prominence in Canada through playing his own songs on CBC (Canadian Broadcasting Corporation) radio and on The John Allan Cameron Show on television. He also performed at prominent folk festivals, often with his brother Garnet.

The website said that Rogers made his first United States appearances in 1978, “which quickly led to comparisons to such folk icons as Burl Ives and Bob Dylan. Peter Yarrow of Peter, Paul and Mary declared him ‘an extraordinary talent,’ and the influential Tom Paxton called him ‘Canada’s Woody Guthrie.’”

While returning home from the Kerrville Folk Festival in Texas, Rogers died June 2, 1983, as the result of a fire on board Air Canada Flight 797 on the ground at the Greater Cincinnati Airport. He was 33 years old.

Among other tributes, Rogers was awarded the Canadian Conference of the Arts’ diplomme d’honneur for individuals outstanding in their service to the arts in Canada in 1984, and he was inducted into the Canadian Songwriters Hall of Fame in 2019.

The Stan Rogers Folk Festival that bears his name, which normally takes place each summer in Canso, Nova Scotia, Canada, was founded in 1997.

Rogers is also remembered through his music. Canada Post said that “he left a legacy of 11 albums, most released posthumously, that have kept his music vibrant and alive for nearly 40 years.”

Also, Canada Post included the titles of some of his best-known songs in a wavelike design on the cachet of its official first-day cover for the new stamp. Among these is Northwest Passage, sometimes referred to as Canada’s unofficial national anthem.

The cover was canceled in Rogers’ birthplace of Hamilton, Ont., with a pictorial postmark featuring a line drawing of a guitar that was custom built for Rogers. A total of 8,000 FDCs were produced.

Lowe-Martin printed the stamp by six-color offset lithography in 180,000 booklets of 10. The stamp is 32 millimeters by 40mm.