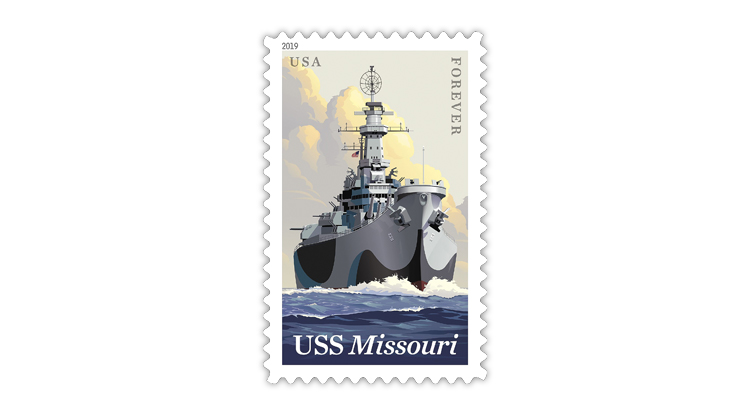 A forever stamp celebrating the USS Missouri will be issued June 11 in Honolulu, Hawaii, the site of the Battleship Missouri Memorial. 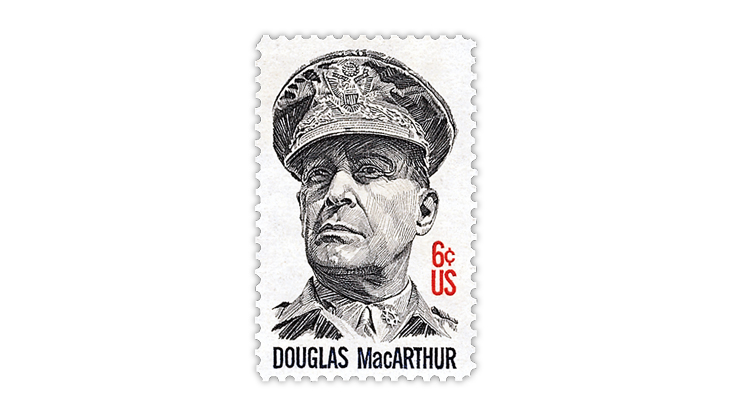 Gen. Douglas MacArthur was honored on a 6¢ stamp in 1971. In a 1945 ceremony aboard the Missouri, MacArthur took part in signing documents confirming Japan’s surrender in World War II. 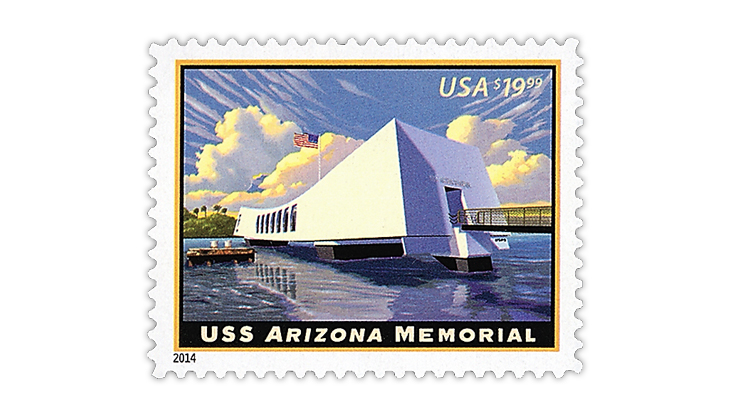 Dan Cosgrove created the artwork for the new USS Missouri stamp. His illustrations have also appeared on 22 stamps in the American Landmarks series, including this $19.99 USS Arizona Memorial stamp issued in 2014. 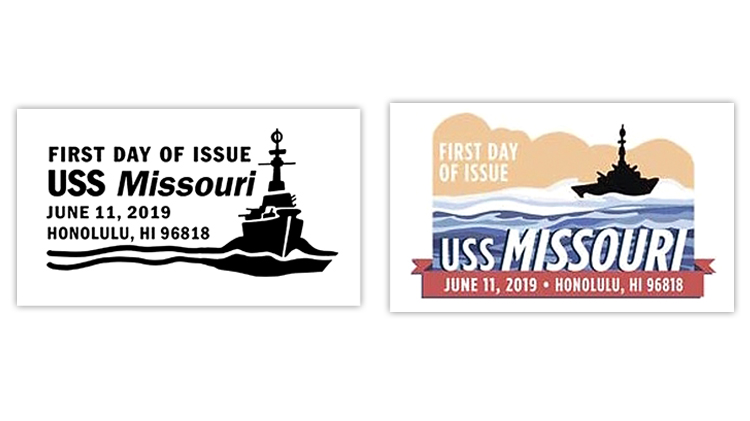 The United States Postal Service prepared two first-day cancels for the the USS Missouri stamp. Both show the likeness of the famous battleship.
Previous
Next

The issue date marks the 75th anniversary of the Missouri’s commissioning on June 11, 1944.

The stamp will be issued in panes of 20 with a first-day ceremony at the Battleship Missouri Memorial at Pearl Harbor in Honolulu, Hawaii. The ceremony will begin at 11 a.m. Hawaii Standard Time.

While the first-day ceremony is open to the public, specific admission and security procedures are in place, including restrictions on items that can be carried and requirements for boarding transportation to the memorial.

Visitors who wish to attend the event must register online at usps.com/ussmissouri, where the attendance regulations are described in full.

Affectionately nicknamed “Mighty Mo,” the USS Missouri is being commemorated, in part, for its significant role at the conclusion of World War II.

“On Sept. 2, 1945, military officials from the Allied powers and imperial Japan convened on her deck and signed the documents confirming Japan’s surrender and ending the war,” the Postal Service said.

Among the American officers taking part in the signing ceremony were Gen. Douglas MacArthur, the commander of U.S. Army forces in the Pacific; and U.S. Navy Fleet Adm. Chester W. Nimitz.

The website of the Battleship Missouri Memorial reports that the ship was constructed at Brooklyn’s New York Navy Yard during WWII. It was christened by Margaret Truman when it was launched Jan. 29, 1944, and it was commissioned as the USS Missouri on June 11, 1944, with Capt. William M. Callaghan in command.

The ship saw 17 years of active service, including its support of United Nations forces during the Korean conflict.

According to the U.S. Navy, “Although most remember Missouri as the symbolic end of World War II, she was a highly decorated battleship that earned eight battle stars during her service to the nation—three during World War II and five during the Korean War. Missouri was also the first battleship to fire Tomahawk cruise missiles at Iraqi targets at the commencement of Operation Desert Storm.”

The ship was decommissioned in 1992.

The Navy history continues, “Missouri was donated as a museum and memorial ship on May 4, 1998, and today rests near the Arizona (BB 39) Memorial at Pearl Harbor.”

The Pearl Harbor Visitors Bureau notes that the USS Missouri “was the last American battleship ever built, despite their military successes, mostly due to the increased importance of aircraft carriers.”

The illustration on the new commemorative stamp was created digitally by artist Dan Cosgrove, whose images of locations from all over the United States have appeared on stamps in the American Landmarks series.

The USS Arizona Memorial is just one of the sites that Cosgrove has illustrated, for a $19.99 stamp issued March 13, 2014 (Scott 4873). Since the American Landmarks series began in 2008, he has created the vignettes for 22 higher denomination stamps, which were listed in a table in the Jan. 28 Linn’s Stamp News, page 8.

According to the Postal Service, the artwork on the new stamp depicts the Missouri “in the disruptive camouflage she wore from her commissioning until a refit in early 1945.”

The stamp was designed by USPS art director Greg Breeding. The pane of 20, offset-printed by Banknote Corporation of America, includes a banner along the bottom with the ship’s name spelled out in dropout white against an ocean background.

Two pictorial first-day cancels, one in black and the other in color, each include a representation of the battleship as part of the design.