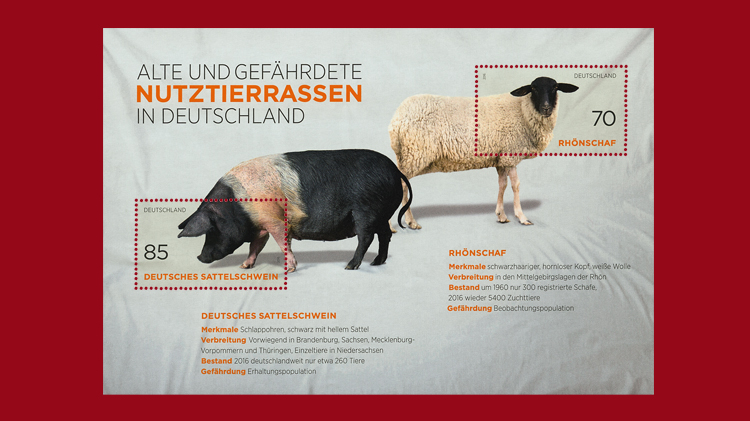 The German Livestock Breeds souvenir sheet of two stamps was issued in 2016 (Scott 2934). 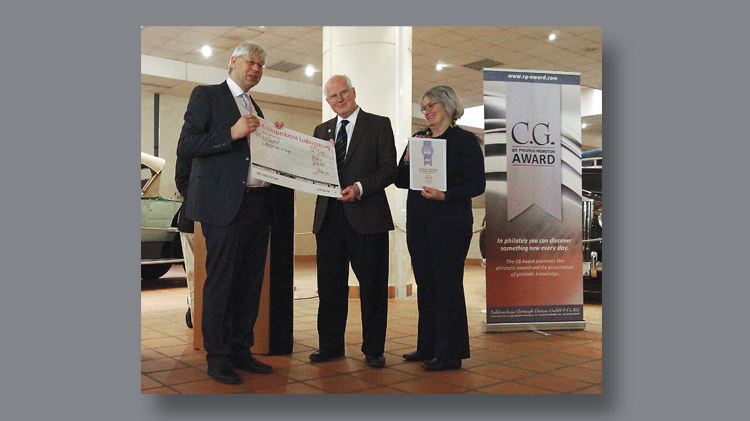 Christoph Gaertner (left) presents the Collectors Club of Chicago with the top C.G. Award 2017 for philatelic literature. Leonard Hartmann and his wife Sarah accepted the award Nov. 30 at a ceremony in Monaco. Photo courtesy of Rene Hillesum, Filatelie, Z
Previous
Next

Auction house Christoph Gaertner has sponsored the competition since 2013. The 2017 awards were presented during the Monacophil 2017 stamp show in the Top Cars Museum.

Representatives from all four societies were present to accept the awards.

I am certain all four of the organizations appreciate the recognition through these awards, in addition to the financial element of the contest.

There were 35 entries in the competition. Eight entries were from the United States.

One element of the contest also focuses on the promotion of youth philately. A stamp club in Germany won the prize through a book detailing how the club was able to convince local members of parliament to get a stamp issued for the Rhon sheep.

The book showcased the steps club members took, and the celebration of the souvenir sheet that was ultimately issued Sept. 1, 2016.

The photos in the book show that the celebration was a wonderful community event that helped bring awareness of philately to a general audience. Congratulations to the Stamp Collectors Club of Meiningen for the creative thinking that inspired this project.

Editor’s Foreword to Philatelic Foreword; a nod to Linn’s legacy and hobby’s future