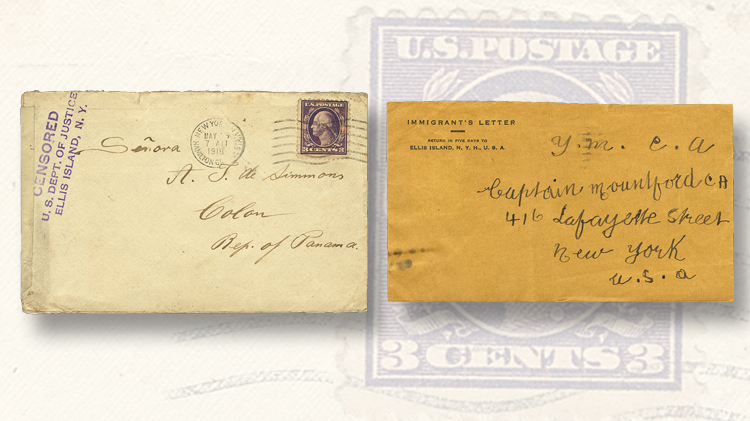 To the left is a World War I censored cover, likely from a German sailor interned on Ellis Island. On the right is an “Immigrant’s Letter” with a back cancel of 1929, from someone on the island who had not yet been admitted into the United States. 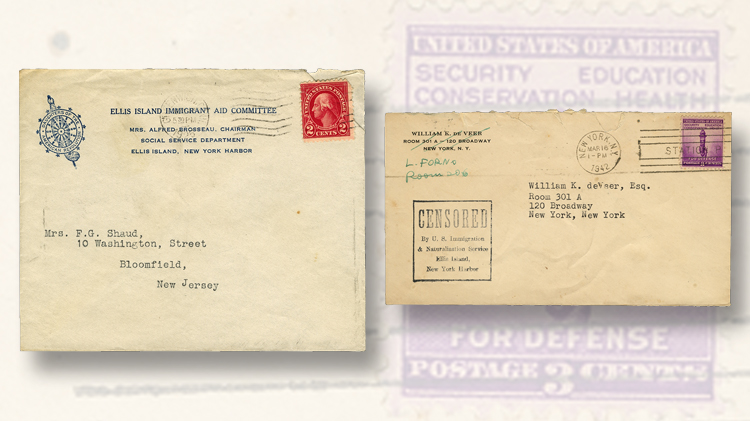 One of the private groups that helped to see to the needs of refugees and immigrants flowing through Ellis Island sent the 1925 cover shown to the left. On the right is a 1942 censored cover sent from someone on the island.
Previous
Next

My wife and I both have relatives from generations back who came through Ellis Island, the first stop for immigrants coming to the United States from Europe.

During its years of operation as the initial port of contact with United States officialdom, from 1892 to 1954, 12 million immigrants and refugees landed there. Of those, approximately 98 percent were admitted. The other two percent were returned as aliens ineligible to enter.

Reasons for rejection included communicable diseases, criminal background, insanity, or a finding that the would-be immigrant was unlikely to be able to support himself and would become a public charge.

Over the years, I’ve gathered covers related to Ellis Island, and, though small in number, they help to tell the story. Four covers are pictured with this column.

The Hamburg-America Line ships Prinz Sigismund, Grunewald, Sachsenwald and Savoia had been interred at Colon in the Canal Zone since 1914. They would have been returned to Germany after the war, but during the war, any mail from them would have been censored.

The second cover is back-stamped New York City, July 19, 1929, and was apparently sent free of postage. With a return address that reads “Immigrant’s Letter” at Ellis Island, it has a script “Y.M.C.A.” where the stamp should be. Apparently, the writer had not yet been cleared to enter the United States.

Third is a 1925 cover from the Ellis Island Immigrant Aid Committee based on “Ellis Island, New York Harbor.”

This cover bears the logo of the Daughters of the American Revolution in the upper left, demonstrating that there were many nongovernmental organizations trying to help with immigrant processing and with meeting the immigrants’ needs while they were on the island.

The final cover illustrated was canceled in New York City March 16, 1942. The return address is “L. Forno, Room 206.” It does not say Ellis Island in the return address, but there is a censored handstamp citing the Immigration and Naturalization Service on Ellis Island as the censoring authority. Censorship would have been routine for mail leaving the island during World War II.

I’m sure there are many more Ellis Island covers out there, and that they and the letters within would help to put a human face on what was a large government-run processing center. While Ellis Island was a gateway for the greatest percentage of those who passed through, it also saw many unhappy endings.