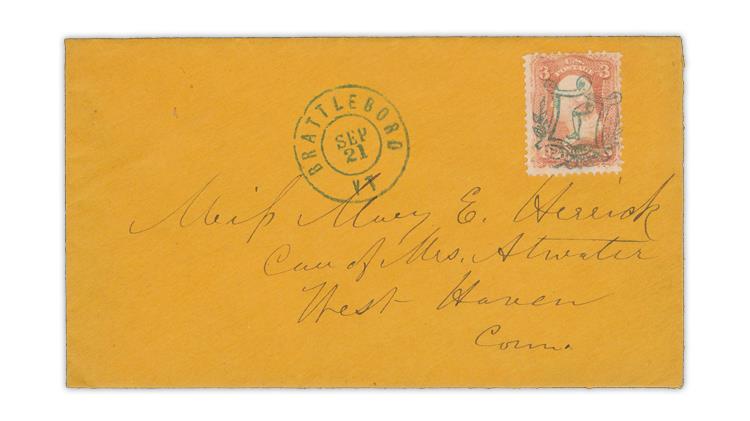 H.R. Harmer’s Sept. 30-Oct. 1 auction series includes the impressive James E. Challenger collection of United States postal history. One of the select items in the collection is this attractive cover featuring an exceptionally bold strike of the Brattlebo 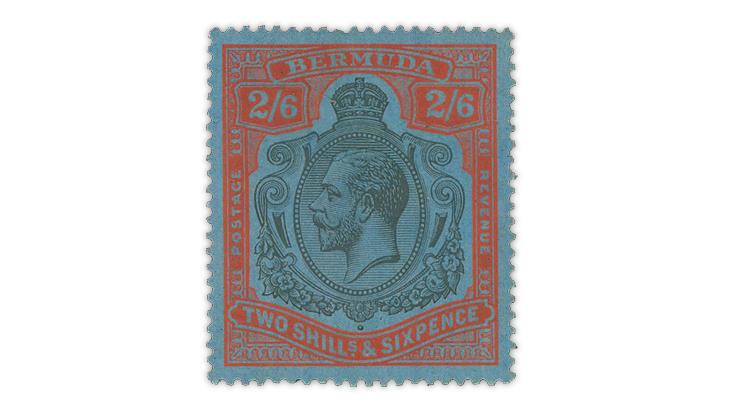 Part 2 of the Bedford collection, which focuses on British Commonwealth, is being offered by H.R. Harmer on Oct. 1. A highlight in the Bermuda offerings is a 1932 2-shilling 6-penny bright orange vermilion and black King George V on deep blue paper that H
Previous
Next

H.R. Harmer will offer selections from four significant name collections and a panoply of United States, British Commonwealth and worldwide stamps and postal history during five sales to be held Sept. 30-Oct. 2 at the firm’s Rockefeller Plaza office in New York City.

Bidders wishing to attend the sales in person must make advance reservations with H.R. Harmer.

Leading off the three-day series of sales on Sept. 30 are the Gary B. Nash collection of British Commonwealth and the collection of U.S. postal history formed by James E. Challenger.

Nash, who was a member of the UCLA history department since 1966, died July 29. In a brief introduction in the H.R. Harmer catalog, the Nash family said, “As a lifelong historian, collecting stamps was a natural complement to his professional life. Buying, selling, and studying the origins of stamps provided a calming reprieve from academia, and he shared with his family how much he enjoyed the nuanced artistry and historical context of each stamp.”

In addition to the numerous attractive mint and used singles in the Nash collection, bidders will have opportunities to bid on various country collections.

An 1880-1953 Cyprus collection, described by H.R. Harmer as a “powerful selection of sets and singles with numerous high values all on Scott [album] pages,” is offered with a starting bid of $1,500.

Collectors and specialists of fancy cancels will find much to their liking among the 298 lots in the Challenger collection of U.S. postal history.

In the catalog introduction, H.R. Harmer president Charles Epting notes that the collection “presents an exciting opportunity to bring to market many unique or rare covers which were collected decades ago.”

One of the more eye-arresting fancy cancels is the Benedict Arnold’s Leg of Brattleboro, Vt. The example in the Challenger collection is a wonderfully clear strike on a cover sent from Brattleboro to West Haven, Conn.

The Benedict Arnold’s Leg cancel, which is socked on the nose, barely ties the 1861 3¢ rose George Washington (Scott 65) to the bright orange envelope.

H.R. Harmer describes this cover as “extremely fine and attractive in every respect” and notes that only three other examples of the Benedict Arnold’s Leg cancel are recorded, all on off-cover stamps.

“On the grounds of the Saratoga National Historic Park, there rests a monument to Benedict Arnold’s leg. It sits on the spot where Arnold fell wounded during the Battle of Freeman’s Farm. He had just led a brilliant charge against a British redoubt — the culmination of a day of extraordinary field generalship that led one of his soldiers to later write of Arnold that he was ‘the very genius of war.’

“The leg was severely wounded, bleeding copiously, and pinned beneath Arnold’s own horse. It survived the battle and the war.”

Part 2 of the Bedford collection, which focuses on British Commonwealth, and the Alan J. Melville collection of Tristan da Cunha will cross the H.R. Harmer auction block on Oct. 1.

The Bedford collection features 488 lots that include myriad “high-value stamps from across the Empire,” states Epting in the catalog introduction.

“From Great Britain’s 1882 £5 Bright orange to Kenya & Uganda’s 1925 £4 Rose lilac and black — both never hinged — the ‘Bedford’ Collection is replete with wonderful examples of difficult stamps.”

A highlight in the Bermuda offerings is a very well-centered 1932 2-shilling 6-penny bright orange vermilion and black King George V on deep blue paper (a variety of Scott 95) that H.R. Harmer describes as the “rarest of the George V keyplate shades.”

A 2014 certificate from the David Brandon expert committee states that the stamp is “unused with large part original gum” and has “some slight gum toning.”

H.R. Harmer is offering this 2sh6d King George V color variety with an opening bid of $750.

The Scott Classic Specialized Catalogue of Stamps and Covers 1840-1940 lists three different color varieties of Bermuda’s 2sh6d King George V. The scarcest of these is the 1930 pale orange vermilion and black on gray blue paper (Scott 95a), which is valued at $3,500 unused. Keep in mind that this value applies to a stamp in very fine condition with full original gum.

The Melville collection of Tristan da Cunha is replete with postal history that reveals interesting aspects about the group of islands in the south Atlantic Ocean that lie midway between the Cape of Good Hope and South America.

Two cacheted covers that recognize the March 1937 visit of HMS Carlisle to the islands feature two maps that show Tristan Island and its location in the Atlantic Ocean.

The first was mailed to South Africa and is listed with a starting bid of $75; the second is addressed to Derby, England, and is offered with a $60 opening bid.

According to H.R. Harmer, 500 Tristan da Cunha Map covers were produced aboard HMS Carlisle “as a souvenir for officers of the visit.”

Oct. 2, the final day of the auction series, features U.S. and worldwide stamps, covers and collections. A total of 11 People’s Republic of China collections will be up for bids. Opening bids for these PRC collections range from $250 for a 1978-84 collection of first-day covers to $1,400 for a 1960-63 collection of mostly never-hinged issues, some of which have “trivial bits of gum toning or a slight gum disturbance,” according to H.R. Harmer.

Separate catalogs for each of the five auctions are posted on the H.R. Harmer website. Each catalog is downloadable, and online bidding options are available.