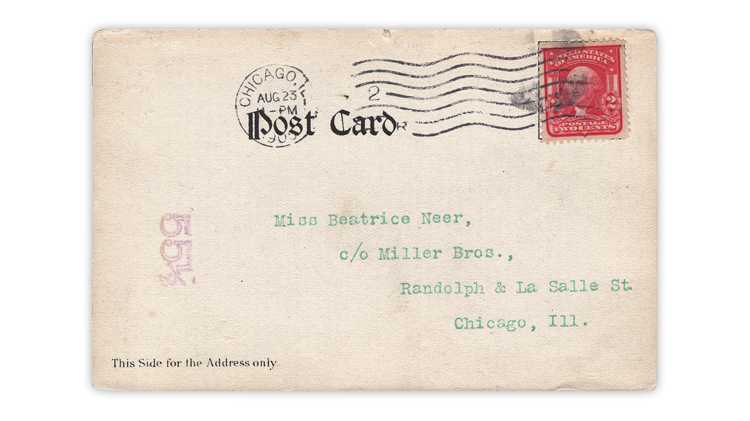 This 1905 intra-Chicago postcard has a curious number with a fraction. Why? It’s a postal marking indicating a subdivided postal route number.

Linn’s reader Ben Termini of Fort Worth, Texas, recently asked if I could help with a question he had regarding the 1905 postcard shown here. He had noticed the curious purple “55½” marking on the front and wondered if it had anything to do with mail handling?

As it happens, I am a longtime collector of postal handstamps, usually referred to as auxiliary markings. While my special area of interest is mail delays, I have seen these markings before associated with mail handled in Chicago, and I recalled the wonderful book Chicago Postal Markings and Postal History by Leonard Piszkiewicz.

In Chapter 44, “Carrier Markings,” Piszkiewicz wrote: “Many route numbers are expressed as fractions, e.g., ‘45½’ and ‘74¼.’ These numbers were generated when a route was divided into additional routes, primarily in the center of the city, as business grew.

“The fractions originated in the following manner. As a carrier route grew too large to be serviced by a single carrier, the route was divided, part retaining its original number and part being assigned the same number with the fraction ½ added. As a route was divided further, additional fractions were added. These fractions were, in turn, 1/3, ¼, 1/5, etc. Fractions as high as 1/9, are known.”