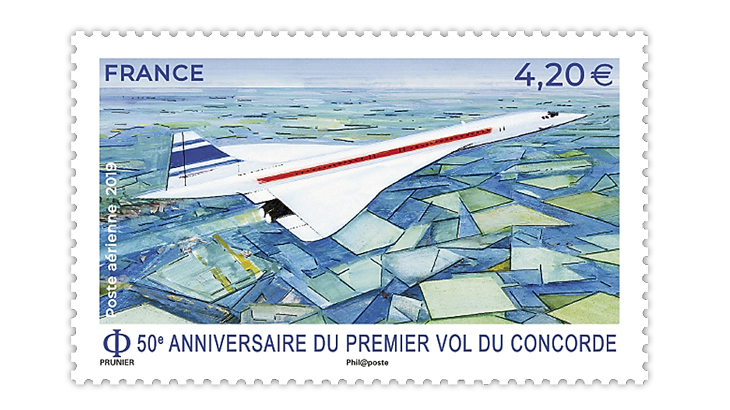 A new French commemorative salutes the 50th anniversary of the first flight of the Concorde on March 2, 1969. 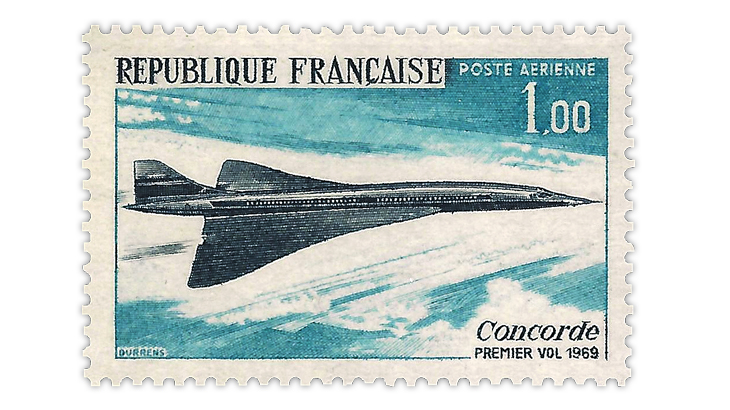 France’s La Poste issued a €4.20 stamp March 1 to commemorate the first flight of the Concorde.

This supersonic passenger aircraft developed by France and Great Britain made its maiden flight March 2, 1969, from Toulouse, France, though it didn’t begin regular passenger service until 1976.

The 1969 flight was in a French-made prototype and lasted less than 30 minutes. The pilot Andre Turcat said, “Finally the big bird flies, and I can say now that it flies pretty well.”

The new French commemorative for the 50th anniversary depicts the prototype in flight. Designed by Jame’s Prunier, it was printed in sheets of 40 and panes of 10 with additional drawings of the Concorde in the selvage.

Francie Grace reported for CBS News (www.cbsnews.com): “The Concorde soared into the sky on its last regular passenger flight Friday, heading for London as the world bid adieu, cheerio and farewell to the era of supersonic travel.”

In providing background about the Concorde, she said: “The technological marvel flew 11 miles above the Earth at up to 1,350 mph, crossing the Atlantic in about 3 1/2 hours. With the five-hour time difference, passengers arrived in New York earlier than they had left London.

“The British and French hoped to sell hundreds, but in the end only 16 were built. They were used by British Airways and Air France.”

In addition to the aforementioned stamps, many other commemoratives honor the Concorde’s brief career. France even included it on a €0.46 stamp (Scott 2881a) in a pane celebrating transportation milestones of the 20th century.