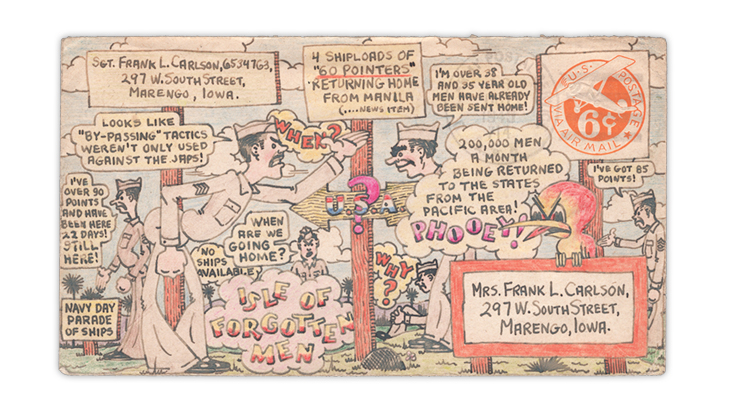 The illustrations on this October 1945 cover are typical of artwork that Sgt. Frank Carlson added to his letters home.

Frank Carlson is a name well known to World War II cover collectors. While in the military and writing home, he added intricate designs to his envelopes. Some of his correspondents had the good sense to retain the covers, and one of them is shown here.

Addressed to his wife and sent in October 1945 from Army Post Office 714 in Manila, the Philippines, the envelope illustrates complaints about the method of determining who got to go home first. Points were given for length of service, service abroad, combat service and being a parent.

With 7.6 million servicemen and servicewomen overseas as WWII ended, there were not enough ships and planes to bring them all home at once. And, of course, no system was going to satisfy everyone.

Naturally, those waiting at home were also anxious. This cover looks to be an attempt to explain the situation to Carlson’s wife.

Once home in December 1945, Carlson continued to produce various types of decorated covers. ...

To see the other two Frank Carlson covers discussed in this week’s U.S. Stamp Notes, subscribe to Linn’s Stamp News.