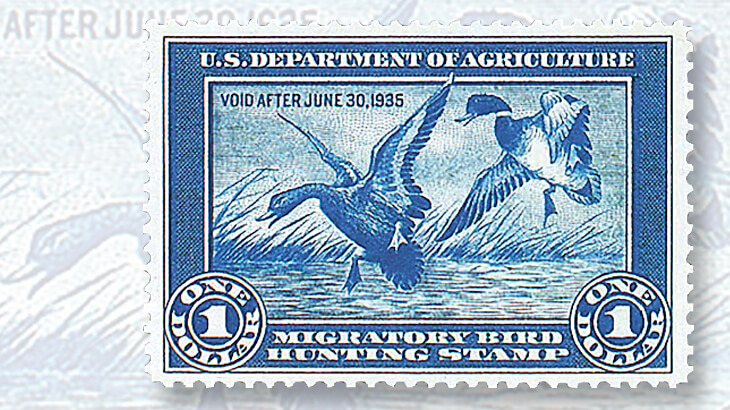 Passage of the Migratory Bird Hunting and Conservation Act in 1934 led to the creation of federal waterfowl hunting permit stamps, known to collectors as duck stamps. Pictured is the first duck stamp, Scott RW1.

Most onlookers regard stamp collectors as gentle folk. Their identity as “philatelists” is derived from the ancient Greek word for “love.”

Collectors relish retreating to quiet stamp dens and serene libraries dedicated to this hobby. Here, in silence, they delight in mounting stamps in albums and are pleased to fill every space on the pages.

Who associates stamp collecting with protest marches full of passion that capture national headlines? Such havoc rocked the 1930s in Colorado and spread to other states on the Great Plains.

During the Great Depression, stamp collectors raised an earth-shattering quack against duck hunting that wiped out huge flocks and pushed mallards towards near-extinction.

The president turned his love for the hobby into public policy that protected waterfowl by outlawing duck annihilation.

On March 6, 1934, two years after entering the Oval Office, Roosevelt signed the Migratory Bird Hunting and Conservation Act. Its short-hand name is the Duck Stamp Act.

Roosevelt believed collecting stamps “dispels boredom, enlarges our vision, broadens our knowledge, makes us better citizens, and in innumerable ways, enriches our lives.” By the end of his life, FDR had amassed 1.2 million stamps in 150 volumes.

Amid howls of protest from hunters who detested government infringement on their right of unlimited duck bounty, FDR rallied stamp collectors to his cause.

He didn’t realize his cure for the duck demise would work so effectively. Later, the president was forced to sign legislation to thin the exploding duck population, especially in eastern Colorado.

The 1934 Duck Stamp Act required gun-toting American hunters to each buy a handsome $1 stamp, sign it, and then affix it on a valid state hunting license.

Hunters and collectors bought these stamps at local post offices protecting ducks, geese and swans. The stamps offered a new specialty for philatelists who prized them as works of art.

The federal government efficiently managed money realized from this program, converting 98¢ of every duck stamp dollar into the purchase, care and enhancement of federal wetlands and marshes.

My backyard in Arvada, Colo., abuts the smallest federal nature preserve in the nation. My wife and I hike its trails along ditches where ducks paddle and procreate.

“FDR, the passionate philatelist, loved stamps too much to allow last year’s [1934] duck issue to be anything but irresistible,” observes Brinkley.

Designers and engravers competed to win the coveted nomination of their entry as the next duck stamp.

“In October 1942, 700,000 mallards congregated in northeastern Colorado, devouring unharvested grain due to a wartime shortage of farm labor,” reports Brinkley, “principally in the cornfields bordering the Platte River. Due to the skyrocketing number of ducks, FDR instructed Secretary of Agriculture [Claude R.] Wickard to issue a ‘community permit’ authorizing any properly licensed hunter living along the Platte River to shoot mallards in the fields at all hours of the day during the period of enforcement.”

Such a measure softened farmers’ anti-duck protests provoked by the fowl eating grain and leaving stubble in cornfields.

Last March, I asked Professor Brinkley on a C-Span segment taped at the Tucson Book Festival if his book mentioned how valuable stamp collecting was for FDR.

He shot back, “Are you a plant in the audience? Your comment about FDR’s dedication to stamp collecting is right on target. The hobby familiarized the president with geography and wildlife concerns. That’s because stamps tell stories. And FDR mastered stories behind stamps, often learning about natural calamities that needed remedy.”

Since the first duck stamps were issued in 1934, their sales have raised more than $850 million to protect wildlife on six million acres that comprise part of our national wildlife refuges.

Next time someone says stamp collecting is merely a sedentary hobby that thrives on “pasting stamps” in albums, speak up. Don’t duck what history teaches.

Philatelists in the 1930s joined forces with an activist stamp-collecting president whose conservation policies restored wild fowl on the Great Plains and in other refuges protected by the U.S. government.

Duck stamps are proof of these remarkable achievements.