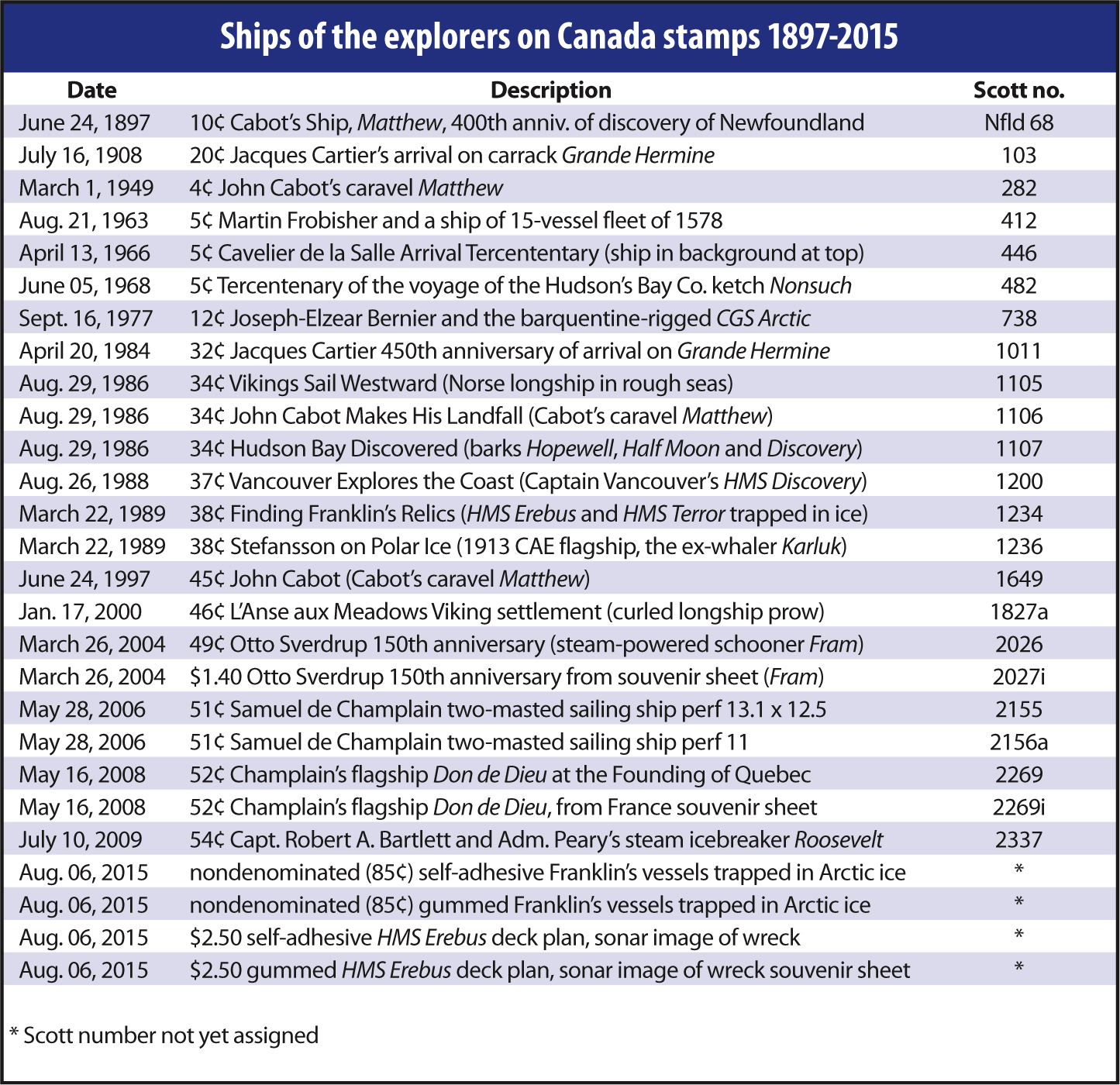 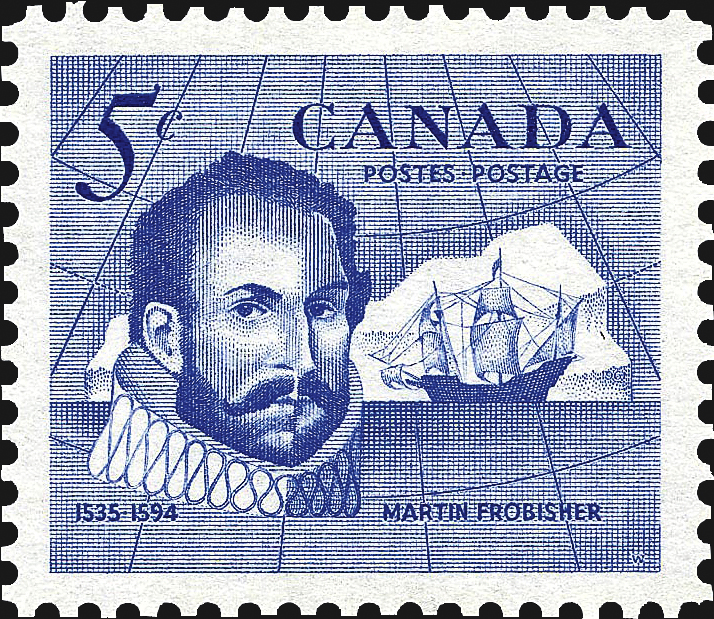 A 16th-century seeker of the elusive Northwest Passage was English sailor and privateer Martin Frobisher, who commanded a fleet of 15 vessels on a search for riches that took him to the southeastern end of Baffin Island in 1578, where Frobisher Bay was named for him. 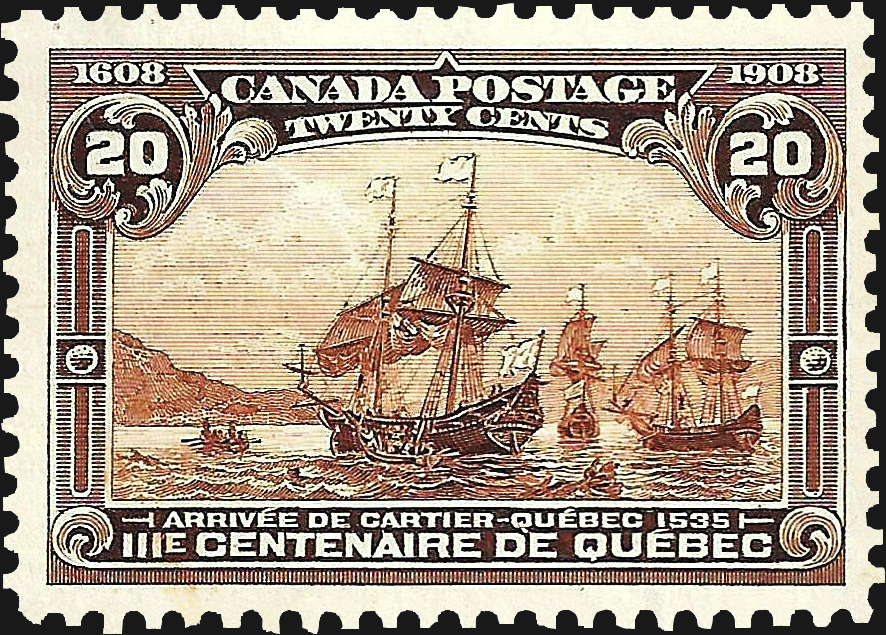 This 20¢ Canada commemorative issued in 1908 to celebrate the 300th anniversary of Quebec (Scott 103) depicts Jacques Cartier’s three ships arriving in New France in 1535. 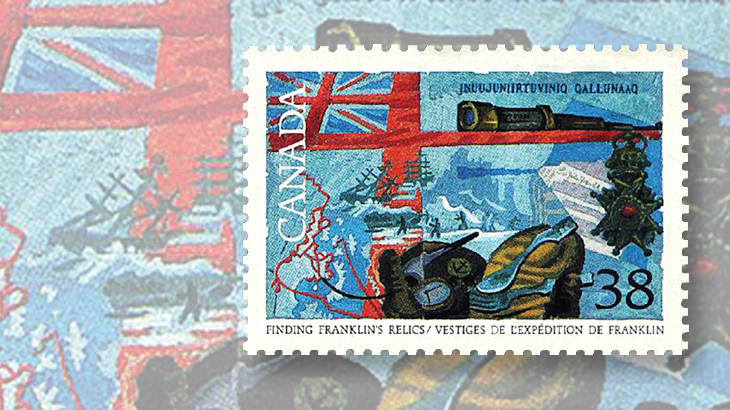 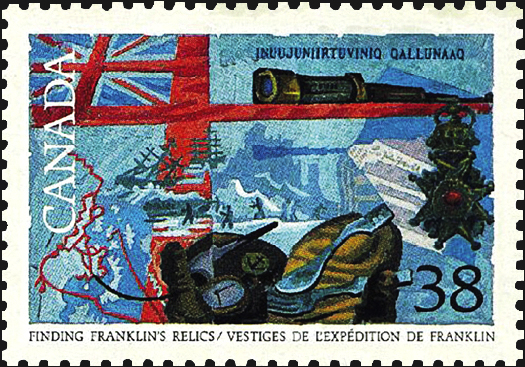 This 1989 38¢ Explorers of Canada stamp (Scott 1234) inscribed “Finding Franklin’s Relics” shows artifacts carried by the survivors of the lost mission against the background of a British naval ensign and a scene of Franklin’s ships trapped in the ice. 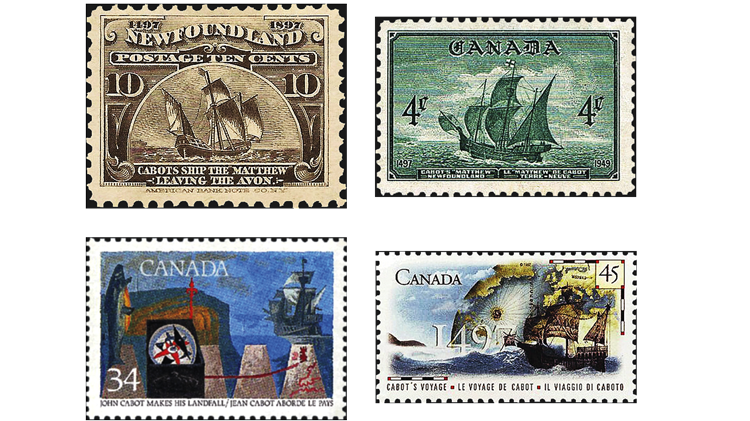 With no fewer than four different varieties issued Aug. 8, John Franklin’s HMS Erebus, the flagship of his 1845 voyage in search of the Northwest Passage, becomes the most commemorated ship of any Canadian explorer, although the expedition he commanded was anything but a success.

A fifth stamp (Scott 1234), a 38¢ commemorative issued in 1989 as part of the Explorers of Canada series, depicted Erebus and its Royal Navy sidekick, HMS Terror, trapped in the Arctic ice that doomed them.

As a nation, Canada is like the United States in the importance that transatlantic exploration had on its eventual colonization and development. That is why these North American neighbors have issued numerous stamps honoring these men and the ships they sailed into history.

The first Canada stamp to depict the ship of an explorer was issued by Newfoundland more than half a century before it joined Canada in 1949. It also was the first of four stamps, shown above, to depict the Matthew of Bristol, which was piloted in 1497 to what was then regarded in England as “New Found Land” by John Cabot (one of six names by which this Italian-born navigator is known).

The variety of depictions of Cabot’s ship is due less to the artistic license of the various designers involved than it is to the fact that we know little about the earliest of these ships of the explorers.

Most were unremarkable merchant or naval vessels of their era, of which no definitive drawing was ever made at the time.

The names of some of the vessels are lost, if they ever had a name. And many of the stamps honoring Canada’s inland explorers picture canoes, which were regarded more as a tool than a vessel.

The first stamp printed by Canada to illustrate ships of an explorer was the 20¢ high value in a set issued in 1908 celebrating the 300th anniversary of Quebec (Scott 103). The stamp depicts Jacques Cartier’s three ships — Grande Hermine, Petite Hermine and Emerillon — arriving in New France in 1535.

The first of these was a stylized 1963 5¢ stamp honoring Martin Frobisher (Scott 412), who sought the Northwest Passage as Franklin did, but several centuries earlier.

Frobisher’s scowl on the stamp may reflect his experience in the last of his three voyages to northern Canada in 1578.

With financial backing from England, the men of Frobisher’s 15-ship fleet worked feverishly to dig and load up 1,350 tons of glittering ore to carry back to England, only to discover that it was all iron pyrite — “fool’s gold.”

Still, the wide inlet at the southeastern end of Baffin Island that he was the first European to explore was named Frobisher Bay in his honor.

Those who share this fascination with the ships of the explorers, or ships in general, will want to visit the website of the Ships on Stamps Unit of the American Topical Association and the American Philatelic Society.