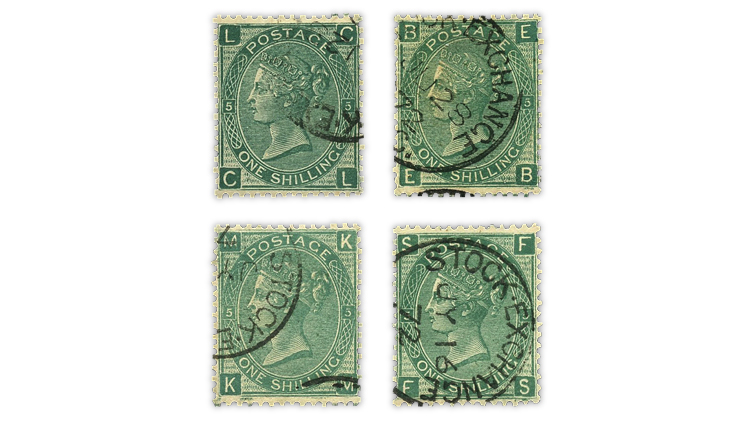 Four examples of the plate 5 Stock Exchange forgery. The two examples at top have corner lettering — CL and EB in the lower corners — that could have appeared on genuine stamps, while the two at bottom show impossible lettering: KM and FS, combinations th

What constitutes the perfect crime? More than one that just can’t be solved, it’s an event that no one even realizes has taken place: a crime whose victim never feels the loss.

The mystery of the Stock Exchange forgery, in which Britain’s Post Office was defrauded of tens of thousands of pounds, is a prime candidate for the title of “perfect.”

Someone — it was never conclusively determined who — applied thousands of counterfeit 1-shilling stamps to telegraph forms at the London Stock Exchange for at least a year between 1872 and 1873 and pocketed the money they represented. Incredibly, nobody was any the wiser until a sharp-eyed young philatelist spotted the fakes for the first time a full quarter-century later.

Subsequent discoveries suggested the full extent of the racket may have reached £50,000 over the many months it went on, equivalent to £5 million to £6 million today.

The above is an excerpt from Matthew Healey’s fascinating account of Great Britain’s 1872 Stock Exchange forgery. To read the whole feature, subscribe to Linn’s Stamp News today.