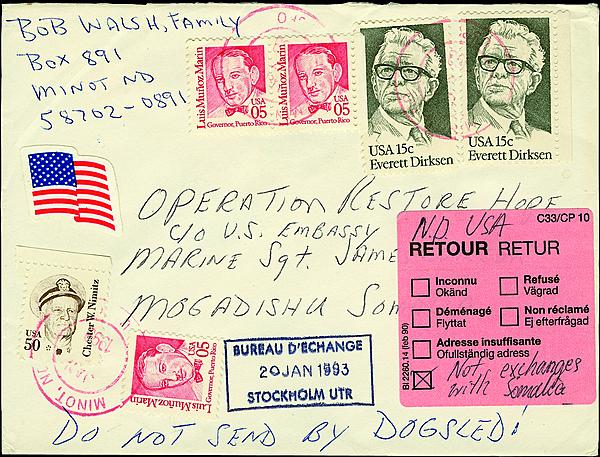 Figure 2. Non-APO mail addressed to Somalia, even to U.S. military, had to go by way of normal international mail channels. But Somalia was dysfunctional when this cover was sent, and the cover was returned by the Swedish mail exchange bureau with the notation that there was no exchange with Somalia available. 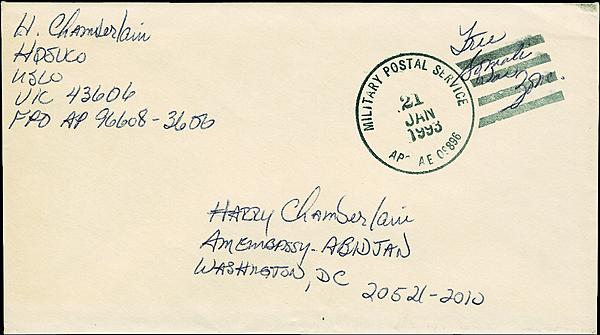 Figure 1. The franking privilege for United States military personnel involved in Operation Restore Hope in Somalia was approved in December 1992, and was extended to the small group of State Department staff assigned to the U.S. Liaison Office in Mogadishu, as shown by the cover dated Jan. 21, 1993.

Free franking from Somalia during the time that the United States military was on the ground there, from 1992 to 1994, was addressed in the Oct. 5, 2010, U.S. Notes column.

A photocopy of that article is available for 10¢ in postage and a 49¢ postage-paid addressed envelope. Requests should be sent to me, John Hotchner, Box 1125, Falls Church, VA 22041.

In response to that article, retired Foreign Service officer Harry Chamberlain wrote to me with the story of his involvement in the mission.

In December 1992, Chamberlain was assigned to the U.S. embassy at Abidjan, Ivory Coast. Responding to a request for volunteers, he was sent on temporary duty to help open a U.S. liaison office in Mogadishu, Somalia’s capital.

Early on, outgoing mail from the military and State Department officers was deposited in a military box to be taken back to the Air Force operations center in Europe by deadheading military aircraft.

Chamberlain says that most of this mail cannot be distinguished from normal APO mail, as most had European or U.S. postmarks applied.

His parents received a letter from him postmarked Charleston, S.C., from New Jersey, and from Frankfurt, Germany APOs.

“I don’t remember the exact date,” Chamberlain said, “but once Gen. Johnston got his 10,000 Marines ashore, a regular APO was established, and if I remember, there was a period of a few days, not more than three, that we had the APO but not the franking privilege. Mail from this period with a stamp and the Operation Restore Hope APO would really be scarce.”

Shown in Figure 1 is a cover that Chamberlain sent to himself in Abidjan Jan. 21, 1993. It has the APO ZIP code 09896 postmark for Mogadishu, Somalia.

By that time, the Operation Restore Hope free-franking privilege had been extended to the handful of State Department personnel that established and maintained the U.S. liaison office in Somalia. The cover has a handwritten franking reading “Free Somalia War Zone.”

A curious footnote to this story is the cover from the United States to Somalia shown in Figure 2. It does not have an APO address, so it went through normal international mail channels.

In this case, U.S. postal authorities sent it to Sweden for onward transmission, but it was returned with the pink “Retour” label in January 1993, with the notation handwritten on the label reading “Not [sic] exchanges with Somalia.”