Another two-night stay during WSS-NY 2016 is being given away: Linn’s Buzz 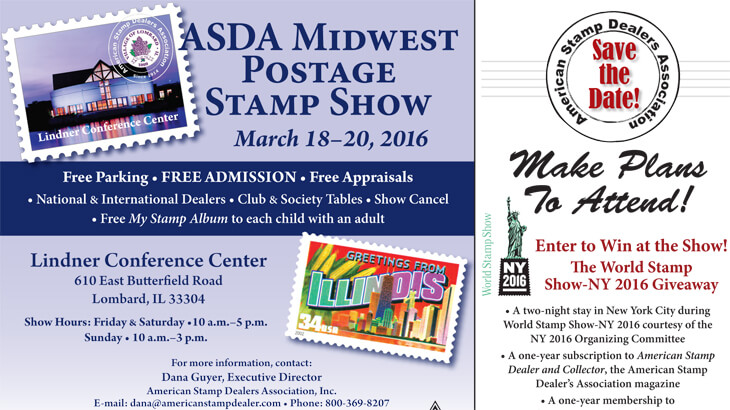 Attendees of the March 18-20 ASDA Midwest Postage Stamp Show will have a chance to win a two-night stay in New York City this spring during World Stamp Show-NY 2016.

1. New York by way of Illinois

The American Stamp Dealers Association is giving away yet another two-night stay in New York City during World Stamp Show-NY 2016 at its show this weekend in the Chicago area.

An international philatelic exhibition is held just once every 10 years in the United States. World Stamp Show-NY 2016 is set for May 28-June 4. Admission is free.

For more information on this weekend’s show and the WSS-NY 2016 giveaway, visit the ASDA's website.

A planned change to the rules governing the 2016 United States federal duck stamp art contest would require that artists “include an appropriate non-waterfowl migratory bird species in the artwork design.”

The comment section for the proposed rule change is now extended.

Linn's Stamp News contributor George DeKornfeld, who grew up in London, writes in his latest column that soccer was a big part of his childhood.

That last one is the focus of two new stamps out of Northern Cyprus that DeKornfeld showcases.