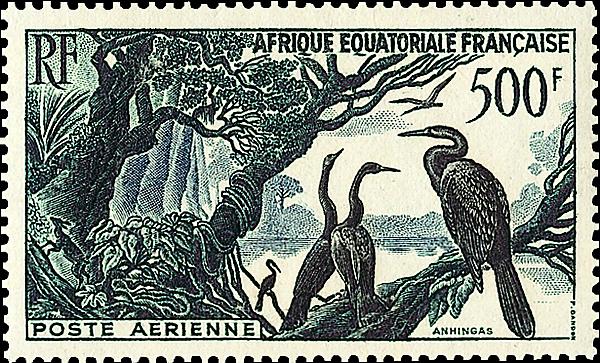 The 1953 French Equatorial Africa Anhingas 500-franc airmail stamp (Scott C37) is a good buy in mint never-hinged condition in the $40-to-$45 price range. 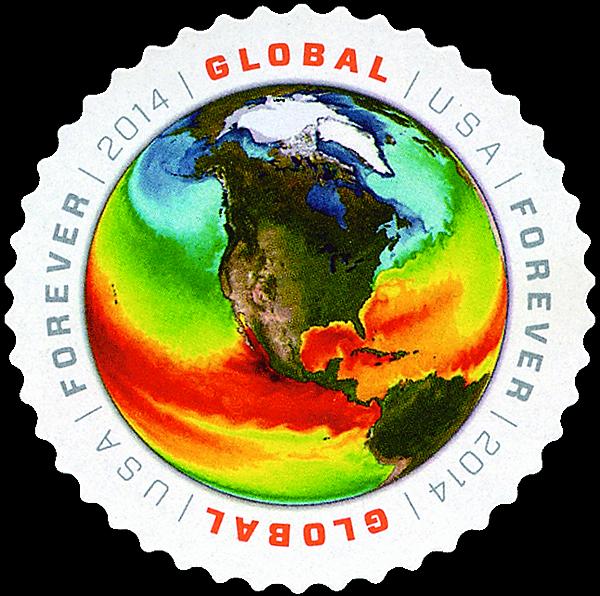 French Equatorial Africa —French colonies are very popular among collectors. From the 1920s on, most French colonies stamps have appealing production values. Many are colorful with striking designs and exotic subjects.

There are also quite a few that appeal to topical collectors, probably the most active segment of the market for these stamps. One such issue is the 1953 French Equatorial Africa 500-franc Anhingas airmail stamp (Scott C37), which has obvious appeal for bird topicalists. These birds are commonly called African darters.

The African darter (Anhinga rufa) is a water bird of sub-Saharan Africa. Its typical mode of swimming, with its long, sinuous neck extending out from the water, gives the species its other common name: the snake bird. Like the cormorant, it is an excellent diver, a characteristic that it uses in catching the fish on which it subsists.

A Linn’s editor found this week’s recommended stamps on the zillionsofstamps.com web site at the following price ranges:

The round stamp, sold in panes of 10 with serpentine die cuts, features a picture of Earth from space showing continents, clouds, and oceans depicted in bright colors representing sea temperature variations. The Postal Service also sold full press sheets of the stamp, both with and without die cuts.

In the Sept. 29 issue of Linn’s, page 13, senior editor Jay Bigalke reported that the Sea Surface Temperatures stamp was sold out at the Postal Service’s Stamp Fulfillment Center.

You might be able to find a few of these still in stock at local post offices.

Buying mint panes of this issue could be worthwhile. No one — whether dealer or collector — is putting away quantities of new issues, so when one sells out unexpectedly, it can catch everyone short. — H.G.