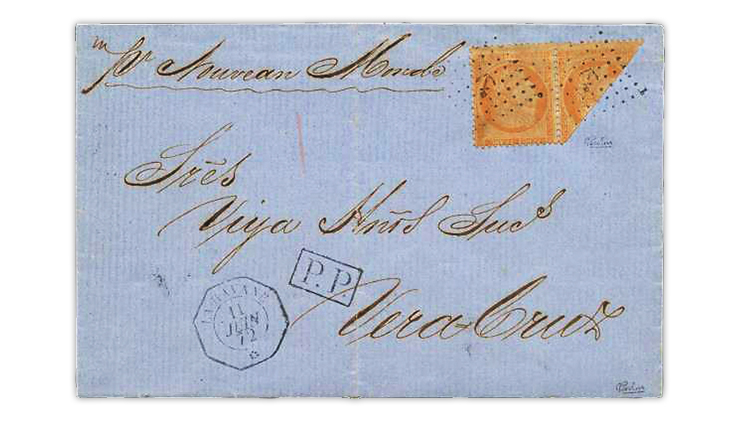 One of the two French stamps franking this 1872 cover is a bisect of the 1870 40-centime Ceres issue. The folded letter is being offered during the Feb. 24-28 Christoph Gaertner public auction in Germany.

The Christoph Gaertner firm in Germany has scheduled its next auction of philately and picture postcards for Feb. 24-28.

Several auction catalogs of worldwide material have been prepared for the sale, including two that feature specialized material from China and Asia, respectively.

The catalog designated for international rarities includes an 1872 cover from Cuba to Mexico franked with an 1870 French Ceres 40-centime orange stamp (Scott 59) bisected diagonally and used in a pair with a complete stamp.

The stamps are tied with two diamond-of-dots cancels with each showing an anchor in the center. Additional markings on the cover, which traveled via the steamer Nouveau Monde, include an octagonal “La Havane/11/Juin/72” datestamp and a boxed P.P. marking on the front. The reverse shows a French “Ligne B Paq.Fr. No.2/11 Juin/72” paquebot datestamp.

Gaertner describes the folded letter as a great rarity of French, Cuban and Mexican philately and as a scarce cover bearing a very rare bisected 40c Ceres.

Among the stamps in this sale is another French Ceres issue, the 1871 Ceres 15c bister as a tete-beche pair (Scott 56a). Described as mint with hinge marks, the pair is neatly trimmed from the pane with small parts of all neighboring stamps on three sides and a partial sheet margin at left.

The auction of single-item lots, large lots, collections and postal history can be viewed on the Gaertner website, with online bidding options available there and through Stamp Auction Network.