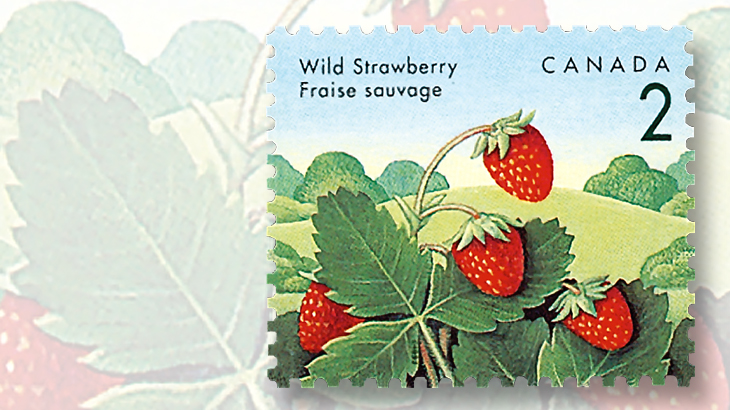 Canada’s Edible Berries definitive set from 1992 includes a 2¢ Wild Strawberry stamp, one of many issued worldwide for the popular fruit. 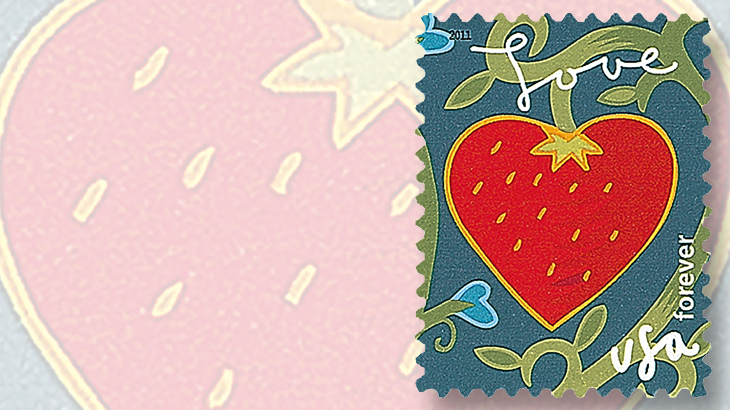 A nondenominated (44¢) Love forever stamp issued as part of a set of 10 in 2011 features a strawberry, emphasizing the fruit’s heart shape. 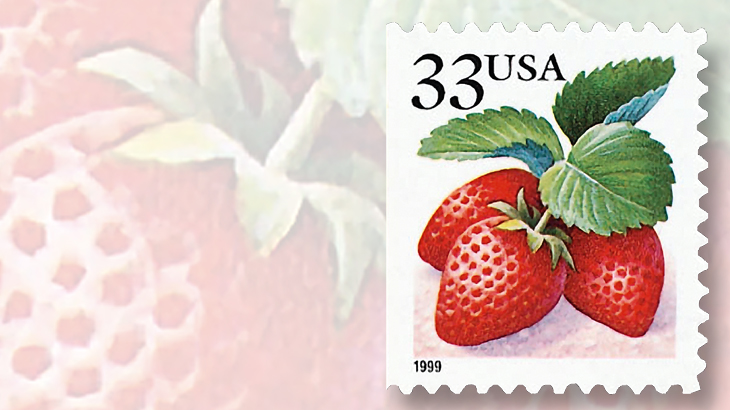 Several varieties of a 33¢ Strawberries stamp were issued in 1999 and 2000 as part of a set of four definitive stamps fulfilling the first-class domestic letter rate then in effect. 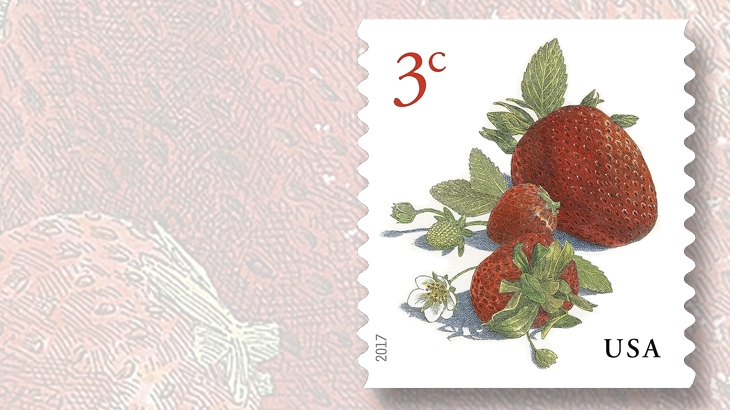 A 3¢ Strawberries coil stamp will be issued May 5 with a first-day ceremony at 11 a.m. in Boxborough, Mass., at the annual Philatelic Show sponsored by the Northeastern Federation of Stamp Clubs.
Previous
Next

The United States Fruit definitive series, which began a little more than one year ago, will add its sixth variety on May 5.

The stamp will be issued in a coil of 10,000 at the annual Philatelic Show sponsored by the Northeastern Federation of Stamp Clubs, which is taking place May 5-7 at the Boxborough Regency hotel in Boxborough, Mass.

The stamp show has scheduled a first-day ceremony at 11 a.m. Friday in the hotel’s Seminar room.

The Postal Service has identified nearby Acton, Mass., as the official first-day city.

The black first-day cancel for this issue is pictorial, with an image of three strawberries and leaves.

The illustration that appears on the Strawberries coil stamp is by John Burgoyne, whose artwork has been adapted for all of the current Fruit definitive stamps issued so far.

According to the Postal Service, the new stamp “features a pen, ink, and watercolor illustration of three ripe, red strawberries surrounded by leaves and hulls and three smaller, green strawberries in various stages of growth. A small white flower from the strawberry plant completes the picture.”

Collectors who want to purchase the stamp in a configuration smaller than a coil of 10,000 will be able to buy 500 stamps from the Postal Service for $15 as USPS item No. 760315. Customers cannot order the 500-stamp quantity until the stamp is issued on May 5, Postal Service spokesman Mark Saunders told Linn’s Stamp News.

The Fruit definitive series appears to be replacing stamps from the 2002 American Design definitive series. The 3¢ stamp in that earlier series was the Silver Coffeepot design, which was issued as a perforated coil stamp with moisture-activated adhesive on Sept. 16, 2005 (Scott 3759), and a self-adhesive stamp in a pane of 20 on March 16, 2007 (3754).

The four Apple varieties on this earlier issue depict the Baldwin, Golden Delicious, Granny Smith and Northern Spy varieties. The 33¢ denomination fulfilled the postcard rate at the time.

In 2011, a set of 10 nondenominated (44¢) Love forever stamps was issued in a pane of 20, with fanciful artwork by Jose Ortega. Plants, flowers and birds appear on the individual stamps, with various heart shapes visible in each subject. One stamp in the set depicts a single red strawberry, emphasizing the natural heart shape of the fruit (Scott 4539).

Strawberries are native to North America and are grown in every state. California is the largest strawberry-producing state by far, and the United States is one of the world’s leading strawberry producers.

The fruit develops on long stems called runners within small plants that grow close to the ground.

The strawberry is a popular ingredient for jams and jellies, and also serves as a sweet treat eaten fresh. Strawberry plants are also known to grow wild.

According to the California Strawberry Commission, a state government agency, “Strawberries are low in sugar and calories and provide a unique combination of essential nutrients, dietary fiber and phytochemicals.”

Many other nations have celebrated the strawberry on stamps, including France, Mexico, Russia, Sweden and Japan. Canada issued a 2¢ Wild Strawberry stamp as part of its 1992 Edible Berries definitive set (Scott 1350).

Technical details and first-day cancel ordering information for the new 3¢ Strawberries coil stamp are provided below.

Standard ordering instructions apply. Collectors requesting first-day cancels are encouraged to purchase their own stamps and affix them to envelopes. The envelope must be franked with at least 49¢ in first-class postage. The first-day cover envelopes should be addressed for return (a removable label may be used), and mailed in a larger envelope addressed to FDOI — Strawberries Stamp, USPS Stamp Fulfillment Services, 8300 NE Underground Drive, Suite 300, Kansas City, MO 64144-9900.

Requests for first-day cancels must be postmarked by July 5.

The Postal Service’s uncacheted first-day cover for the Strawberries stamp is USPS item No. 760316 at 96¢. USPS item numbers for stamps and FDCs also appear in Linn’s 2017 U.S. Stamp Program.