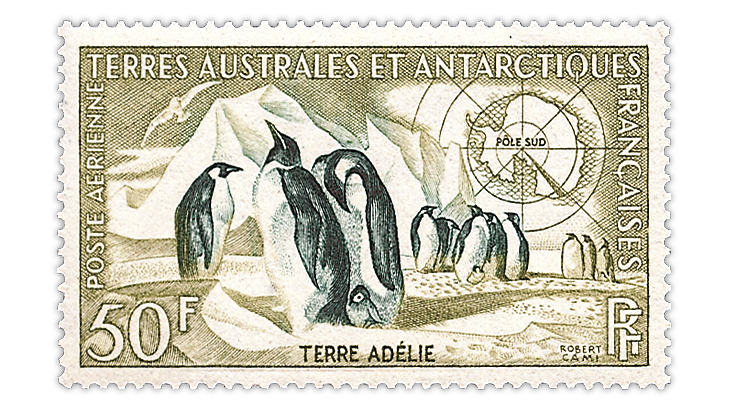 Adelie Land is the part of Antarctica from the Southern Ocean to the South Pole claimed by France. The territory’s other islands lie in the southern Indian Ocean around Madagascar or southeast of Africa and Madagascar.

None of the islands are permanently inhabited by humans. France maintains a staff of approximately 150 military personnel, scientists and support staff in the winter and about 300 in the summer in the territory.

The territory’s stamps enjoy the same high design and production values as French stamps. Many feature popular topical subjects such as birds, fish and ships.

Stamps issued up to the early 1970s are fairly pricey in both mint, never-hinged condition and used condition, but in our opinion, they are overvalued in the Scott Standard Postage Stamp Catalogue. Most sell for 50 percent to 70 percent of Scott catalog value.

Look for the first set of airmail stamps (Scott C1-C2) issued April 25, 1956. These two stamps depict emperor penguins and a map of Antarctica.