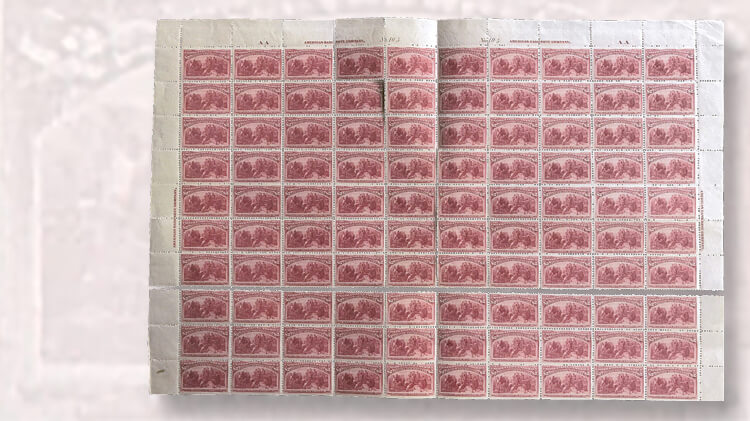 A previously unrecorded full pane of the United States 1893 $2 Columbian stamp turned up in Germany earlier this year, and was sold by the Hans Mohrmann firm at public auction Nov. 15.

In a stunning discovery, a nearly intact pane of $2 Columbian stamps has surfaced in Germany.

The sheet, although separated into two parts, is the only known complete pane of 100 of the $2 stamp (Scott 242) from the first United States commemorative series, issued in 1893.

The pane was auctioned Nov. 15 by the small Munich stamp-auction firm of Hans Mohrmann, with little publicity and no online bidding.

Aside from its separations, the pane, with two imprint plate blocks at top and a natural straight edge at bottom, is in an excellent state of preservation, with fresh, never-hinged gum throughout.

Hempfling, who is primarily a dealer in German-area stamps and covers, also described himself in a phone interview on Nov. 21 as an avid buyer of “unusual worldwide postal history and stamps.” He is based in the small town of Viereth-Trunstadt, an hour’s drive north of Nuremberg.

Scott Trepel, president of Robert A. Siegel Auction Galleries in New York City, first alerted Linn’s to the story, after having flown to Munich to bid in person. Trepel said he dropped out of the bidding at €400,000 and flew home empty-handed. He was, however, able to furnish an image of the pane and a more detailed description of it.

The story of the pane and how it came to spend decades squirreled away in Germany is tantalizingly short on detail.

Hans Mohrmann did not reply to a request for comment, but the pane’s new owner said the consignor had been an elderly widow who inherited it, along with many German stamps, after her husband died several decades ago.

She gradually sold off the German material, but the pane of $2 Columbians remained in her safe, mostly because none of the local dealers could put a reliable value on it.

Finally, she took it to Mohrmann, who told her it would probably fetch more than €10,000 at auction.

It is well known that German dealers were avid buyers of U.S. stamps during the 19th century; for example, the sole recorded buyer of some of the rarer 1875 Special Printings was a dealer from Berlin.

But it is not known who originally bought this pane of Columbians, whose face value of $200 would be equivalent to more than $5,000 today, nor is it known how the pane got into the possession of the late German collector.

The Munich Columbians had been stored, folded up, in a parchment envelope in a bank safe. While the acid-free parchment kept the stamps’ color and gum pristine, the folding weakened the perforations to the point where the pane eventually split into two parts, one of 30 stamps and one of 70. There are further separations in the upper-left part of the pane, affecting the upper-left plate block.

Trepel called the upper right-hand plate block of 10 “spectacular,” adding that to his knowledge, only two plate blocks of six and one plate block of eight survive for the $2 Columbian.

Most of the other stamps in the pane are not especially well centered, Trepel said, although he allowed that a professional grading service might render a more generous opinion.

Full, mint panes of lower-value 19th-century U.S. stamps are not rare, but the situation for the higher-value issues is very different.

Donald Sundman, president of Mystic Stamp Co. in Camden, N.Y., exhibited a set of mint panes of the Columbian issue, from 1¢ up to the $1 denomination (Scott 230-241), at World Stamp Show-NY 2016 earlier this year. His nominal asking price for the $1 pane was a cool $1 million.

Asked whether he intends to preserve the pane or break it into singles and blocks for resale, Hempfling said he is open to either option, and that his decision would rest on prices.

“I would be happy to sell it intact,” he said, assuming he can justify it financially. “Perhaps to a museum or to a wealthy American collector.”