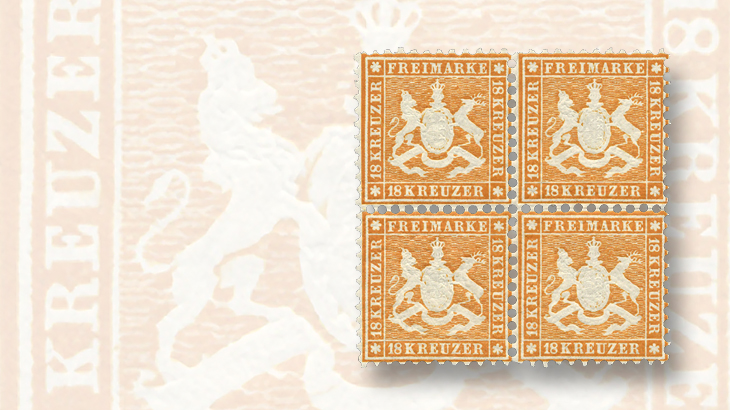 An unusually fresh block of four of the 1863 18-kreuzer orange-yellow Coat of Arms stamp from the German state of Wurttemberg will be offered during the Feb. 22-27 auction series in Germany by Christoph Gaertner. The block was formerly part of the John R. Boker Jr. collection.

The auction firm Christoph Gaertner will hold a series of sales beginning Feb. 22 and running through Feb. 27 at the Gaertner auction hall in Bietigheim-Bissingen, near Stuttgart, Germany.

The auction of worldwide stamps and postal history includes dedicated catalogs for Germany, Europe, and Asia, as well as thematic and topical material, and general worldwide.

The opening day is devoted entirely to Asia, with an extensive listing of China that includes an 1897 registered cover to Capt. Alfred Boehmer in Oppeln, Germany, franked with eight different stamps, including two of the overprinted red revenues: the 1¢ on 3¢, and the large 4¢ on 3¢.

The selection of India in the same catalog offers an unused (without gum) example of that country’s 1852 blue Scinde Dawk, the ½-anna stamp of the Scinde District Post (Scott A2).

The stamp is trimmed at right and has several small surface marks, “but still a fresh and attractive copy of this rarity,” according to Gaertner.

Accompanied by two BPA expertizing certificates, it opens with a bid of €12,000 (roughly equal to $13,440, according to exchange rates in early February).

Collectors will find single used examples of both the ½a white and ½a blue Scinde Dawk stamps in this auction as well.

A featured item in the Tuesday session is a cover franked with the 1845 2½-rappen black, crimson, and blue Basel Dove stamp (Switzerland Scott 3L1).

The stamp in this instance is a plate variety with a point of missing color above the dove’s head on the crimson shield. The stamp is postmarked with a double-ring Basel cancel from Feb. 18, 1847.

The cover is signed A. de Reuterskiold on the reverse, and accompanied by Rellstab and Zumstein certificates. It opens with a bid of €15,000 (approximately $16,780).

Hundreds of United States lots in the Tuesday session include stamps, stampless covers, and other postal history.

The auction session on Wednesday features German states and Germany, German Reich, foreign offices and colonies, Germany after 1945 (including stamps and postal history of the American and British zones), East Germany, Berlin, and the federal republic.

From the state of Wurttemberg in southern Germany comes an unused block of four of the 1863 orange-yellow 18-kreuzer perforated Coat of Arms stamp (Scott 40), described by Gaertner as having extraordinarily fresh color and original gum. The block is the largest multiple of this issue, with only one other block of four in lesser condition known, according to Gaertner.

The block was once part of the remarkable collection of old German states assembled by the famous American collector John R. Boker Jr. (1913-2003). Boker’s extensive collection of German states was sold at auction during the course of 15 years at the end of the 20th century.

The block is accompanied by expertizing certificates from 1988 and 2015, both describing it as unused, post office fresh, with a trace hinge mark on one stamp only.

Collections are featured in the Thursday and Friday sessions, offering thousands of collections from Germany, Europe, and worldwide. The final session on Saturday is reserved for picture postcards.

Information about the Christoph Gaertner February auction is available online, including illustrated listings of individual lots and options to bid, and by postal mail from Auktionshaus Christoph Gaertner GmbH & Co., Steinbeisstrasse 6 + 8, 74321 Bietigheim-Bissingen, Germany.