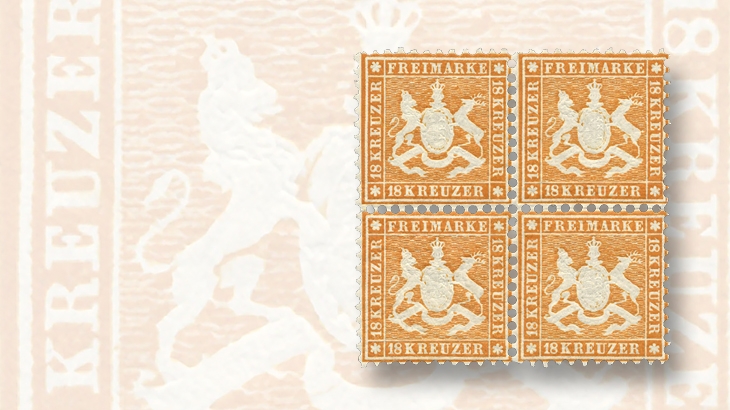 This unusually fresh block of four 18-kreuzer orange stamps (Scott 40) from the old German state of Wurttemberg constitutes the largest known surviving multiple of that 1863 issue. The block sold for $20,800 in the Feb. 22-27 sale by Christoph Gaertner Auctions. 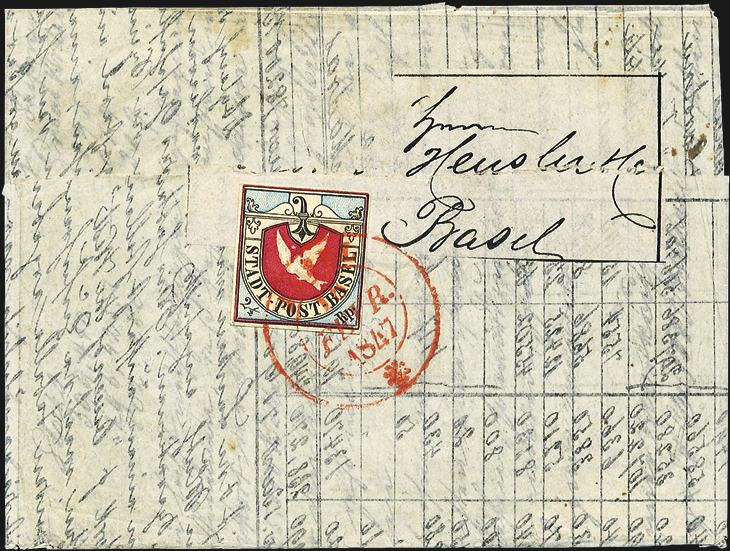 An 1847 Swiss cover consisting of a folded pricelist and franked with an exceptionally nice example of the “Basel Dove” 2½-rappen cantonal issue of 1845 (Scott 3L1) went for $34,700 at the Gaertner sale. The stamp has a plate flaw: a small white dot over the dove’s head. 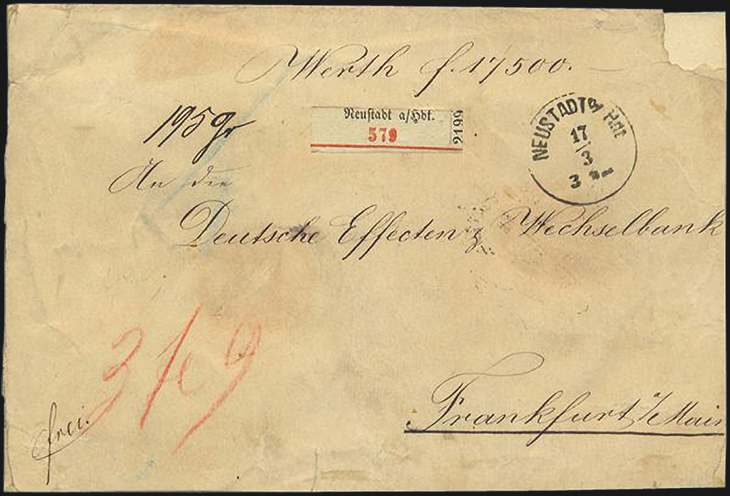 This Bavarian cover of 1875, representing a great rarity of classic Germany, sold for the equivalent of $41,600 at the Gaertner sale. The postal charge of 189 kreuzer represents a record high franking for any domestic Bavarian cover during the kreuzer period. 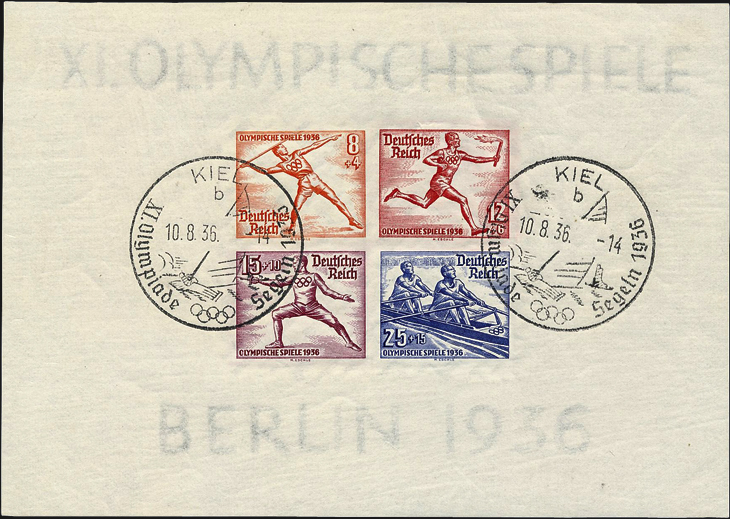 This favor-canceled sheet with four of the eight stamps from the Germany set honoring the 1936 Olympic Games in Berlin sold for about $19,400 at the Gaertner February auction.
Previous
Next

Christoph Gaertner Auktionshaus, based near Stuttgart, Germany, held another of their customary gargantuan sales on Feb. 22-27. The 37,000 lots came from 1,500 consignors, according to the firm, and pushed the sale catalog to eight volumes.

A nearly pristine block of four 18-kreuzer orange stamps (Scott 40) from the old German state of Wurttemberg constitutes the largest known surviving multiple of that 1863 issue. It was once in the collection of John R. Boker Jr. (1913-2003), the American philatelist who built what was probably the greatest collection of German classics ever assembled.

Described as “postfrisch,” or post office fresh, with extraordinarily bright color and light hinging on one stamp only, the block was hammered down for €15,000, which works out to $20,800 with the 22 percent buyer’s premium Gaertner adds to all lots.

A somewhat messy Bavarian cover of 1875 represented another great rarity of classic Germany. The front of the envelope, addressed to a bank in Frankfurt am Main, was marked as having a declared valued of 17,500 gulden, resulting in a postal charge of “3 fl 9” — or, with one gulden (abbreviated “fl”) equal to 60 kreuzer in Bavaria’s pre-1876 currency, a total of 189 kreuzer.

That amounted to a record high franking for any domestic Bavarian cover during the kreuzer period. The amount was paid with three examples of the imperforate 1-mark violet Embossed Coat of Arms stamp (Scott 31), issued in 1874 as part of the transition to a decimal currency and equivalent to 35kr, together with four examples of the 18kr (Scott 30), a 9kr (27) and a 3kr (24) — the kreuzer values all being perforated.

The stamps are all tied by “Neustadt a. Hdt” circular datestamps of Neustadt an der Haardt (nowadays known as Neustadt an der Weinstrasse). A certificate accompanying the cover notes that mixed frankings with the 1m stamp are scarce and that no other complete covers bearing the stamp are known, used examples occurring almost exclusively on parcel post receipt cards. The cover sold for the equivalent of $41,600.

A German souvenir sheet commemorating the 1936 Olympic Games, at which Hitler’s Nazi regime upset many international visitors by seeking to espouse its racist vision of Aryan supremacy, lacked the usual perforations and was described as possibly unique in combination with its two strikes of an uncommon Aug. 10, 1936, pictorial date stamp from Kiel, depicting a sailboat.

The favor-canceled sheet contains four of the eight stamps from the set honoring the Berlin games: the 8pf+4pf Throwing Javelin, 12pf+6pf Torch Runner, 15pf+10pf Fencing and 25pf+15pf Sculling (variety of Scott B92). It sold for about $19,400.

An 1847 Swiss cover consisting of a folded price list, franked with an exceptionally nice example of the celebrated “Basel Dove” 2½-rappen cantonal issue of 1845 (Scott 3L1), was one of the highlights of an extensive Europe offering. The stamp, the world’s first multicolored issue and a masterpiece of delicate Swiss precision, boasts a distinctive plate flaw: a small white dot over the dove’s head. The cover went for $34,700.

A more modern Swiss rarity was offered in the form of a 1940 first-day cover. Bearing a 20c+5c Red Cross semipostal with a redrawn base under the statue of Calven (Scott B104), with two clean strikes of a “Schweiz. Postmuseum Bern” circular datestamp of April 4, 1940, and a typewritten address in Zurich, this is apparently a hard FDC to find. It sold for almost triple its starting bid, or $20,150.