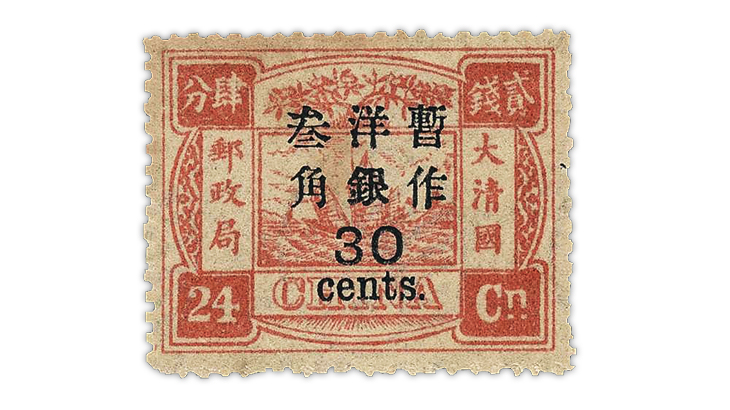 Known as “the Red Ruby,” this rare China 1897 30¢-on-24-candareen carmine Dowager first-printing stamp with large numeral surcharge and narrow spacing will be offered in the upcoming Christoph Gaertner auction series.

The Christoph Gaertner auction firm in Germany has prepared 16 catalogs for its upcoming Feb. 18-22 sale, with specialized auctions of China, Asia, Spain and Germany, as well as Europe and worldwide stamps, covers and collections.

China is featured on the first day, opening with a special auction of liberated areas in the morning and continuing with general China beginning at noon (Central European Time).

Among the offerings is an example of the 1897 30¢-on-24-candareen carmine Dowager first-printing stamp with large numeral surcharge and narrow (1½ millimeters) spacing (China Scott 64).

Known as “the Red Ruby,” the unused stamp has “full original gum … lightly hinged,” and is marvelously well-centered with large margins, according to Gaertner. It is believed to come from a single pane of 20.

Valued at $75,000 in the 2019 Scott Classic Specialized Catalogue of Stamps and Covers, with the value in italics to denote an item difficult to value accurately, the stamp is offered with an opening of €50,000 (approximately $57,360 in early February).

The special auction of Spain on Tuesday afternoon includes an 1851 cover to Valencia franked with the 6-cuarto black and 2-real red orange tied by black spider cancels. The front is also struck with a red Palma D.M. circular datestamp. Bidding is set to open at €25,000 (approximately $28,680).