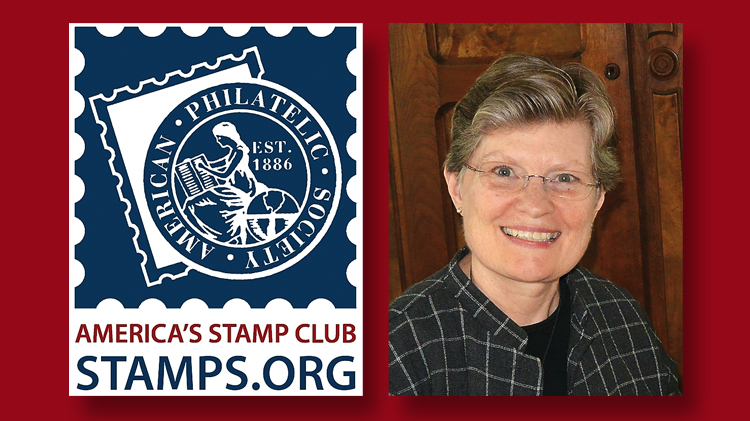 Cheryl R. Ganz, former chief curator of the Smithsonian National Postal Museum, has been named to the American Philatelic Society board of directors as a vice president.

Cheryl R. Ganz has joined the American Philatelic Society board of directors as a member of the APS board of vice presidents.

She fills the two vacancies created when APS vice president Robert Zeigler became president of the organization following the departure of Mick Zais.

Zais was confirmed by the U.S. Senate to the post of deputy secretary of the Department of Education on May 16, which necessitated his resignation as APS president.

After her appointment was proposed by Zeigler during a June 11 conference call meeting, Ganz was confirmed by a unanimous voice vote by the remaining board members.

During the same meeting, Steven J. Rod was named APS historian and also confirmed by a unanimous voice vote.

Zeigler praised Ganz, who retired in 2016 as chief curator of philately at the Smithsonian’s National Postal Museum, for her long dedication to the stamp hobby.

“I determined a nominee based on her record of outstanding service to the society and the hobby in general,” Zeigler said. “An amazing writer and researcher, a great temperament, an experienced philatelist in every sense of the word: Cheryl Ganz.”

Ganz spoke briefly about her involvement in the society and the stamp hobby.

“I’ve always been a big booster for the APS,” she said. Although she has not previously served on the APS board, she noted that she is a member of the APS Ethics committee and the New Initiatives committee.

“If you approve me,” she said, “I will do my best to do everything I can to help the APS.”

APS vice president Jeff Shapiro welcomed her nomination, saying, “It will be an honor to have this fine person be a member of the board of vice presidents.”

The appointment of Rod as historian fills a vacancy created when Gini Horn, a former librarian for the APS, stepped down from the position.

Rod is a former APS vice president, treasurer and APS committee chair, and he is known for having a longtime interest in and extensive knowledge of the history of the stamp hobby.

He also addressed the board, and acknowledged the contributions of Horn and the previous APS historian, Herb Trenchard.

“Herb, who had this job from the early 1980s on, and I were friends during the entire period of time,” Rod said, “and I’ve always been in awe of his knowledge of the history, but then we became competitive in trying to collect the history, and that’s what the fun of stamp collecting is: having a friend who shares your interests.”

The board also approved a resolution honoring Janet Houser, who will retire this summer after 28 years on the APS staff. As youth coordinator and assistant to the director of education, Houser has been instrumental in preparing and presenting the society’s educational programs, including the APS Summer Seminar in Philately and its On the Road courses.

The next scheduled APS board meeting is Aug. 8 in Columbus, Ohio, at APS Stampshow 2018, the society’s annual summer stamp show and convention.