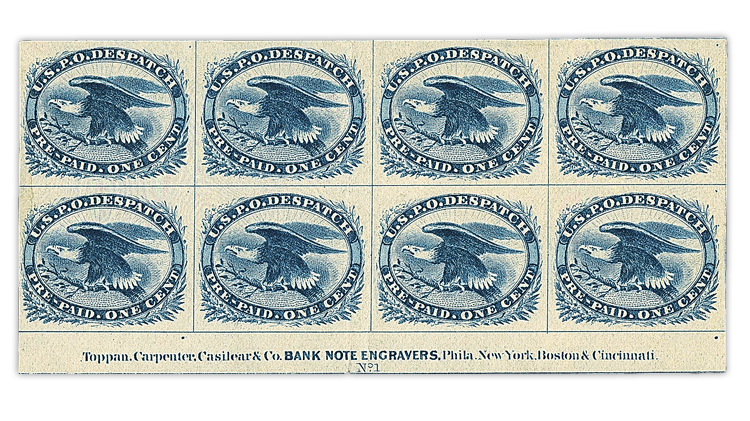 The Scott Specialized Catalogue of United States Stamps and Covers includes a section listing carriers’ stamps and explains what they are: “The term ‘Carrier’s Stamps’ is applied to certain stamps of the United States used to defray delivery to a post office on letters going to another post office, and for collection and delivery in the same city (local letters handled only by the carrier department). A less common usage was for a collection fee from the addressee at the post office (drop letters). During the period when these were in use, the ordinary postage fee defrayed the carriage of mail matter from post office to post office only.”

In 1875, the U.S. government officially reprinted all U.S. stamps issued up to that time. The reprint of the 1¢ blue Eagle general issue carrier stamp was produced both imperforate (Scott LO5) and perforated gauge 12 (LO6).

The Scott U.S. Specialized catalog values the imperforate stamp at just $25 in ungummed as issued condition. It is a great buy at that price in very fine grade.

The catalog also provides details about the three different printings of the reprinted carrier stamps. Finding and collecting an example of all three printings is a fascinating and relatively inexpensive endeavor.