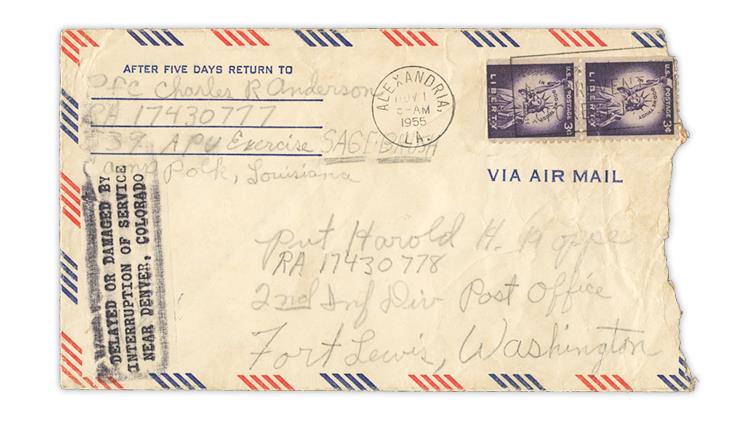 Figure 1. Bound from Camp Polk, La., to Fort Lewis, Wash., this piece of mail was aboard United Flight 629 that was blown out of the sky at 7:03 p.m. Nov. 1, 1955, near Denver. The machine-printed Addressograph marking at lower left on the cover acknowled 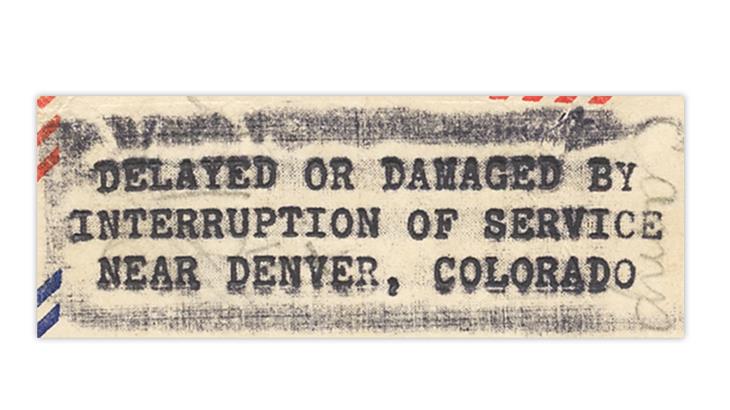 Figure 2. A close-up of the marking on the cover in Figure 1, which reads, “Delayed or damaged by interruption of service near Denver, Colorado.”
Previous
Next

The message on the crash cover shown in Figure 1 doesn’t tell the whole story.

Franked with a pair of 3¢ Liberty series deep violet Statue of Liberty stamps, the cover was sent Nov. 1, 1955, from Camp Polk, La., to Fort Lewis, Wash.

As can be seen in Figure 2, the machine-printed Addressograph message at lower left reads, “Delayed or damaged by interruption of service near Denver, Colorado.” That is a muted explanation for what happened to United Flight 629 on Nov. 1, 1955.

The flight originated at New York’s LaGuardia Airport and made scheduled stops in Chicago and Denver before heading for Portland and Seattle.

At Denver’s Stapleton Airport, the crew changed, additional mail was loaded, and the plane was refueled. It took off at 6:52 p.m., and at 7:03 p.m., the Stapleton air traffic controllers saw bright lights suddenly appear in the sky north-northwest of the airport.

Checking with all the air traffic in the area, the controllers could not account for Flight 629 and ultimately determined based on calls to emergency services that it had crashed.

All 44 people aboard the aircraft were killed: 39 passengers, ranging in age from 13 months to 81 years, and five crew members.

Witnesses near the crash site reported hearing a loud explosion and seeing parts of the plane fall to earth. Because of the total breakup of the plane and the loud explosion, there was early speculation that it was not simply mechanical failure that brought down the plane.

Civil Aeronautics Board investigators gathered the wreckage and discovered a strong smell of explosives on items from the number 4 baggage compartment at the back of the plane.

The FBI was brought into the case and did background checks on each of the passengers. To make a long story short, among those passengers was 53-year-old Denver businesswoman Daisie Eldora King. The agents identified her handbag and found newspaper clippings about her son, John Gilbert Graham, who had been arrested on a forgery charge in Denver in 1951.

Further investigation revealed that he was the beneficiary of her life insurance policy purchased at the airport just before the flight, and that he held a grudge against her for placing him in an orphanage as a child.

Agents also found that one of Mrs. King’s restaurants in Denver had been badly damaged in an explosion, and Graham had insured the restaurant and collected on the insurance following the mysterious blast.

Faced with this additional evidence, Graham was interviewed and on Nov. 13, 1955, he confessed to having placed a dynamite bomb in his mother’s suitcase.

Graham was tried in 1956, convicted despite a vigorous defense, and was executed in the Colorado State Penitentiary gas chamber on Jan. 11, 1957.

A total of 396 pounds of mail was recovered from the crash, with 9 pounds of it in damaged condition. From the nonspecific message on the cover shown here, it is likely that the recipient did not realize that it had been aboard the United flight that met such a tragic end.