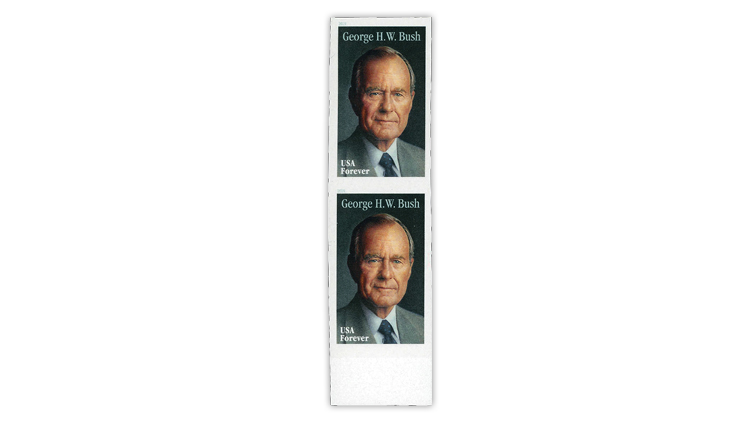 The expertizing agency, affiliated with the American Philatelic Society, describes both panes as genuine and complete with die cutting missing on both sides.

A vertical pair of error stamps with bottom pane margin, possibly from another find, is being auctioned by Daniel F. Kelleher Auctions in Danbury, Conn., as part of the firm’s Dec. 3-5 Flagship series sale.

Most modern U.S. self-adhesive stamps have die-cut separations simulating the shape of stamp perforations. The Scott Specialized Catalogue of United States Stamps and Covers explains that on stamps where die cutting is unintentionally omitted during processing, the descriptions “die cutting omitted” or “imperforate” may be used interchangeably.

Once verified, such stamps are identified as errors in the Scott U.S. Specialized catalog.

The U.S. Postal Service intentionally issued numerous press sheets of commemorative stamps without die cuts from 2012 until early 2016. After that time, only press sheets with die cuts have been issued, including sheets of 120 stamps for the George H.W. Bush issue.

The nondenominated (55¢) George H.W. Bush forever stamp was printed and processed by Banknote Corporation of America and issued June 12, 2019. The stamp remains on sale at many post offices and can be purchased by mail order from the Postal Service.