George H.W. Bush stamp to be issued June 12 in Texas 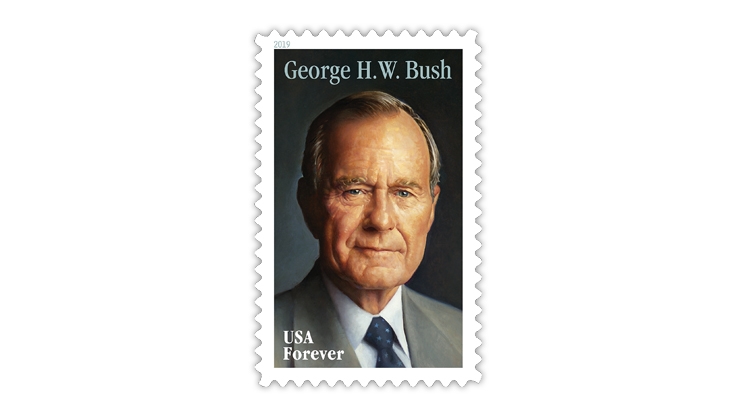 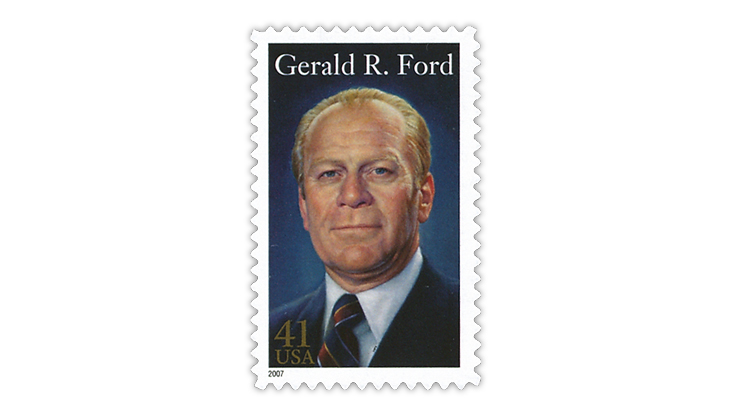 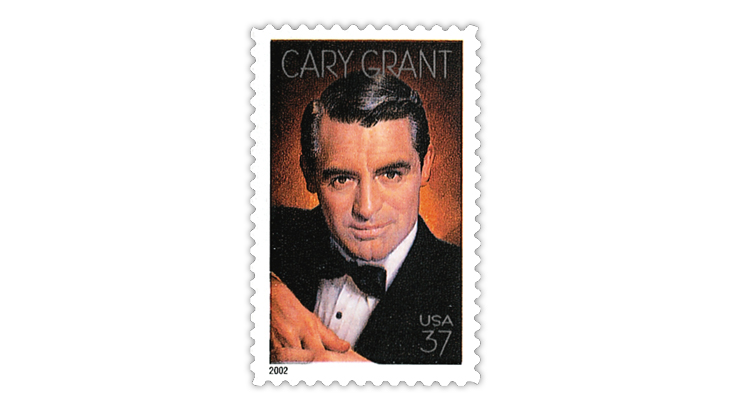 Deas has also painted portraits for stamps honoring actors and writers. The 2002 37¢ Cary Grant stamp is just one of many to feature a Deas portrait. 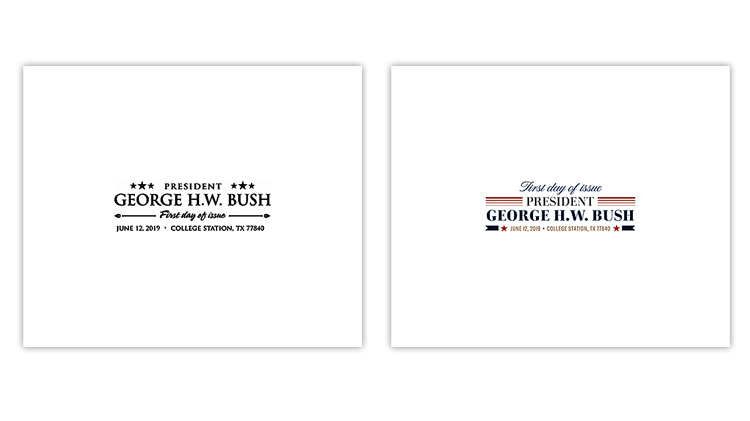 Two first-day cancels prepared for the George H.W. Bush stamp, one in black and one in color. The president’s name is featured in both postmark designs.
Previous
Next

The Wednesday ceremony will take place at 11 a.m. Central Time in the Frymire Auditorium at the Annenberg Presidential Conference Center, 1002 George Bush Drive.

The announced ceremony participants are Pierce Bush, CEO of Big Brothers Big Sisters Lone Star, and the grandson of George H.W. Bush; Robert M. Duncan, chairman of the U.S. Postal Service board of governors, serving as the dedicating official; David B. Jones, president and CEO of the George and Barbara Bush Foundation; Warren Finch, director of the George H.W. Bush Presidential Library and Museum; Chase Untermeyer, founding chairman of the Qatar-America Institute; and Jean Becker, former chief of staff for the  office of George H.W. Bush.

Advance ceremony registration can be found at www.usps.com/georgehwbush.

The nondenominated (55¢) forever stamp honoring the nation’s 41st president will be issued in panes of 20. The design features a portrait of Bush painted by artist Michael J. Deas, based on a 1997 photograph by Timothy Greenfield-Sanders. U.S. Postal Service art director Phil Jordan designed the stamp.

The president died at age 94 at his home in Houston, Texas, on Nov. 30, 2018, less than eight months after the April 17 death of his wife Barbara, to whom he had been married for more than 73 years.

Bush served as president from Jan. 20, 1989, to Jan. 20, 1993. Before his election, Bush served as vice president to President Ronald Reagan from 1981 to 1989. He had also served as director of the Central Intelligence Agency, ambassador to the United Nations, and U.S. Congressional representative from Texas.

A U.S. Navy fighter pilot during World War II, Bush flew 58 combat missions in the Pacific. Discharged in 1945, he received three Air Medals and was awarded the Distinguished Flying Cross.

“The 41st president of the United States guided the U.S. through the end of the Cold War and drove the creation of a multinational coalition that successfully forced Iraq to withdraw from Kuwait in the Persian Gulf War,” the Postal Service wrote in honor of Bush.

“An advocate for public service, Bush explained his vision of a nation of volunteers as ‘a brilliant diversity spread like stars, like a thousand points of light in a broad and peaceful sky.’”

Exactly 12 years after Bush was inaugurated for his single four-year term as president, his eldest son, George W. Bush, was inaugurated as the 43rd president of the United States, on Jan. 20, 2001.

The George H.W. Bush memorial stamp is being issued a little more than six months after the president’s death. It is a tradition for U.S. stamps honoring presidents to be issued soon after their passing, and efforts have been made in the past to issue the memorial stamp on or near the late president’s birth date. Bush was born June 12, 1924, in Milton, Mass.

The current stamp subject selection criteria followed by the U.S. Citizens’ Stamp Advisory Committee advises that proposals for a deceased individual will be considered three years following his or her death, but that a memorial stamp honoring a U.S. president will be issued, simply, “after they are deceased,” with no time limitation stated.

The Postal Service is offering two first-day cancels in association with the release of the George H.W. Bush memorial stamp; one in black, and one in multiple colors including blue and red.

Though classified as pictorial cancels by most collectors, both of the first-day cancels are composed primarily of text with small stars and other simple ornamentation. The name President George H.W. Bush is highlighted in larger letters on both cancels.