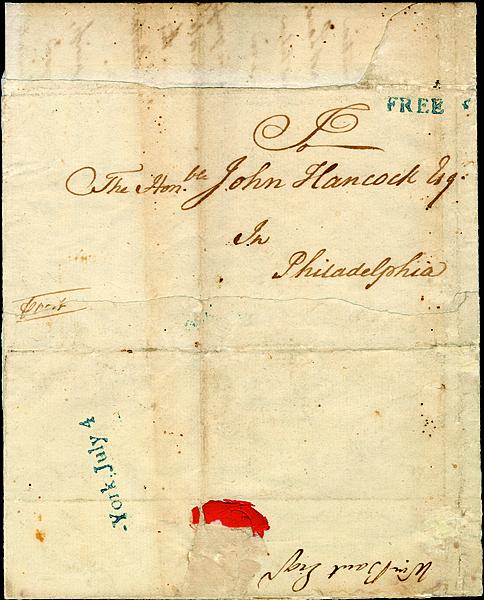 A cover mailed via Constitutional Post to John Hancock on July 4, 1776, is featured in George Kramer’s exhibit “United States Domestic Mails, 1776-1869.” The item is currently on loan to the Smithsonian’s National Postal Musuem.

“United States Domestic Mails, 1776-1869,” an eight-frame philatelic exhibit nearly three decades in the making, won the Grand Prix d’Honneur at the Brasiliana international stamp show in Rio de Janeiro in late November. That is the highest award in all philately.

Its creator, George Kramer, is a prominent American philatelist who is a former chairman of the Philatelic Foundation and has won numerous awards for exhibits in the past.

Speaking by telephone from his home, Kramer talked about his exhibit and how he put it together.

“Like any good book, it has a beginning, a middle and an end,” he said.

It began, he recalled, when a dealer at the Ameripex stamp show in Chicago in 1986 offered to sell him a letter mailed to John Hancock on July 4, 1776.

That item of postal history, for which Kramer remembers paying $8,000 or $9,000, had been sent by the Constitutional Post, a revolutionary counterpart to the British postal system in the 13 colonies. As such, it represents a historic moment in the founding of postal service in the United States.

“Then it was just a matter of 25 years or so getting the rest of the stuff,” Kramer added wryly.

Important pieces documenting the expansion of mail service throughout the young United States came from auctions, with further material bought from dealers.

Kramer estimated he spent “in the low seven figures” to put the exhibit together. A few important Pony Express items, for instance, cost several hundred thousand dollars each.

The exhibit concludes in 1869, the year the transcontinental railroad was completed.

Having won the Grand Prix National award at the Pacific 97 show and a Grand Prix in Australia in 2005, the exhibit was nominated for the ultimate award several times without winning.

A friend remarked to Kramer after the award, “They finally got it right.”

Kramer, who turns 77 at the end of December, plans to scan all 128 pages of his exhibit and send them digitally to the American Philatelic Society, to be shared as they see fit.