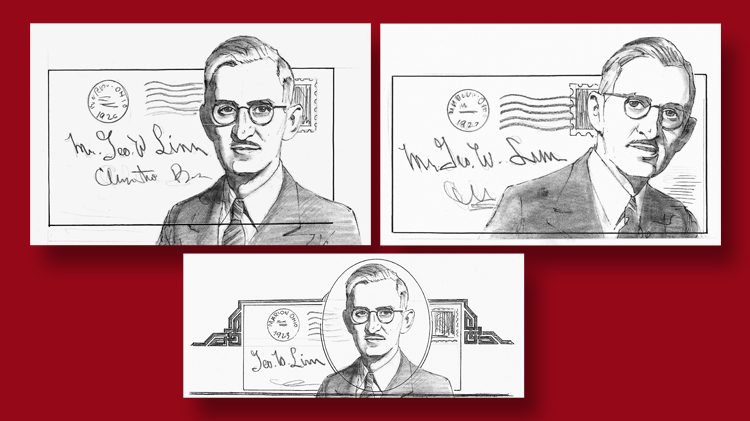 Three different sketches created by Summers of different concepts of a portrait of George Linn for the cover of Linn’s. 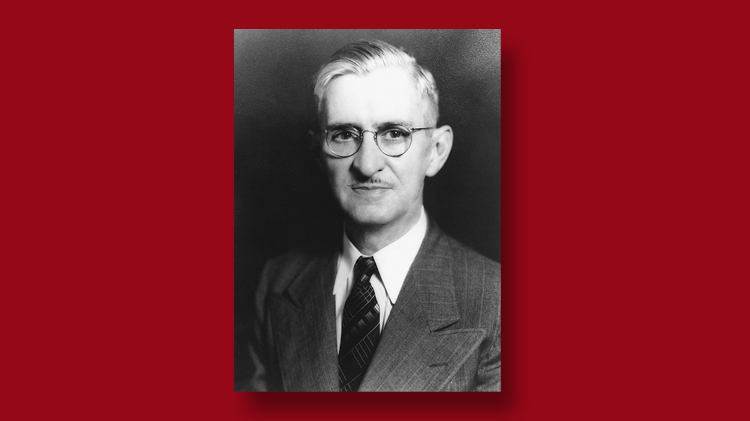 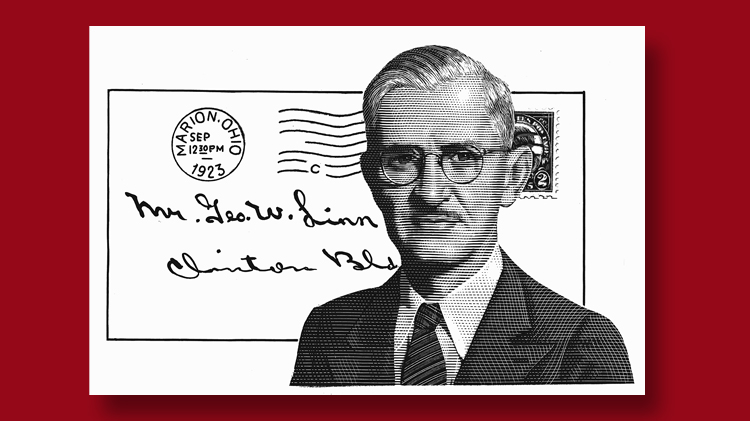 The final black-and-white scratchboard art by Summers. He also created a separate colorized version of the illustration that appears on the cover of Linn's.
Previous
Next

I remember the moment back in the mid-1990s when I sent in my payment and form to start my subscription to Linn’s Stamp News. I was about 10 years old at the time. It has been interesting following the publication since then, and it’s a pleasure to be a part of the team that brings Linn’s to you.

This July monthly issue of Linn's brings a new look for the publication. One noticeable change is the inclusion on the cover of a scratchboard illustration of George W. Linn, the founder of the weekly publication named for him. This year marks the 90th anniversary of Linn's Stamp News, and I thought it fitting that we add a nod to our past with a portrait of the founder.

Before I get to the background details on this artwork, I want to mention a couple highlights of the redesign, which hits each page of Linn's, from the cover to the back.

We have increased the spacing between sentences, we have increased the font size for stamp programs and similar items, and we have changed the column widths to be more flexible with images (to be able to show stamps, covers and other objects more in proportion to each other). The font size also was increased in our event calendar and classified sections.

Follow along in future issues of Linn's as we continue to strengthen our already top-notch lineup of content. This issue includes an article in partnership with the National Postal Museum's celebration of its 25th anniversary, a new feature article on Civil War-era fiscal revenue stamps and an updated Stamp Collecting Basics column by Michael Baadke. Janet Klug’s column continues under a new name, Stamp Excursions.

Behind the portrait of Linn on the cover is an artistic representation of the first-day cover he created in 1923 for the 2¢ Harding stamp. This cover is considered to be the birth of the cacheted FDC.

If you think the style of the artwork of Linn and his FDC looks familiar, you are correct. Artist Mark Summers, who created it for us, created the art for stamps in the Distinguished Americans series (Scott 3420-3436) and for the 2009 Abraham Lincoln issue (4380-4383). Among his other credits are illustrations of authors, poets and others for Barnes & Noble, and his artwork appears on a regular basis in Rolling Stone.

Shown above is the photograph of Linn that we provided to Summers. He then sent us three sketches (second image above). Summers said that he liked the fact that Linn’s signature was on the FDC. “I collect autographs and find that their addition to an image really personalizes it," he said.

One of the preliminary sketches featured a 1920s style decoration, a throwback to when Linn's Weekly Stamp News started in 1928. "It isn’t out of touch with today," Summers said.

Ultimately we went with the third sketch, and Summers produced the final black-and-white version shown in the third image above. He also created a color background for the image, and that is what appears on the cover of the July 2018 issue of Linn's, and will also appear in the weekly issues, starting next week (July 23).

I hope you enjoy the new look of Linn’s. I also would like to thank the Amos Media Co. team who made all these changes happen.