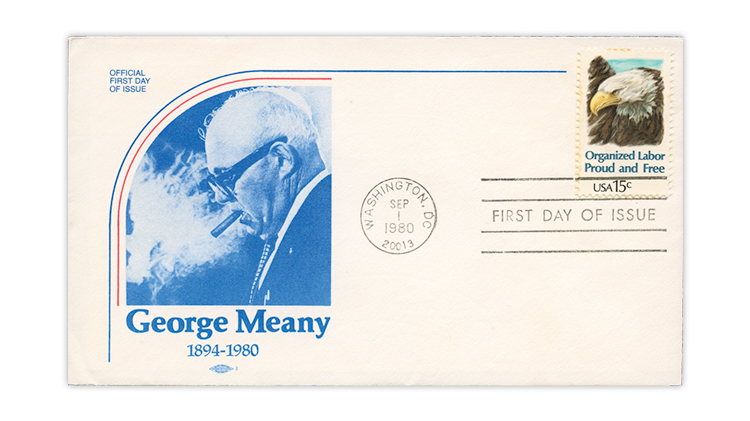 Note the similarity between the American bald eagle on the 15¢ Organized Labor stamp and George Meany in the photo in the cachet of this Sept. 1, 1980, first-day cover. It was accepted at the time that the stamp was meant to honor the recently deceased Me

In 1980 there was a rule, since modified to have no practical meaning, that a person had to have been deceased for 10 years before being honored on a U.S. stamp. Only former U.S. presidents were exempt.

But a way could be found to get around the prohibition, as illustrated by the first-day cover pictured here.

George Meany (Aug. 16, 1894-Jan. 10, 1980) was the notoriously hard-nosed president of the American Federation of Labor-Congress of Industrial Organizations (AFL-CIO). In this role, he was the leading spokesman for American labor interests, and in the words of the Encyclopedia Britannica, “he used his power vigorously.”

He was a consequential leader at the national level, and his passing was mourned by many.

Of course he was not immediately eligible for a postage stamp, but the U.S. Postal Service found a way to honor his memory by commemorating organized labor on a 15¢ stamp issued Sept. 1, 1980, two weeks after what would have been Meany’s 86th birthday.

The image of the American bald eagle on the Organized Labor stamp certainly captures Meany’s pugnacious operating style. This is especially evident in the photo in the cachet of the FDC shown here. The cover was sponsored by the AFL-CIO.