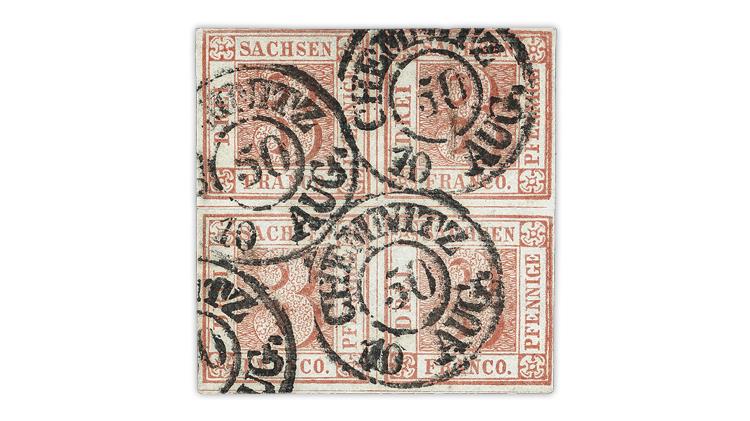 The largest surviving multiple of the 1850 Saxony 3-pfennig cherry red stamp will be offered during the April 19-24 Heinrich Koehler auction in Germany. The block of four is from part 5 of the extensive Erivan collection. 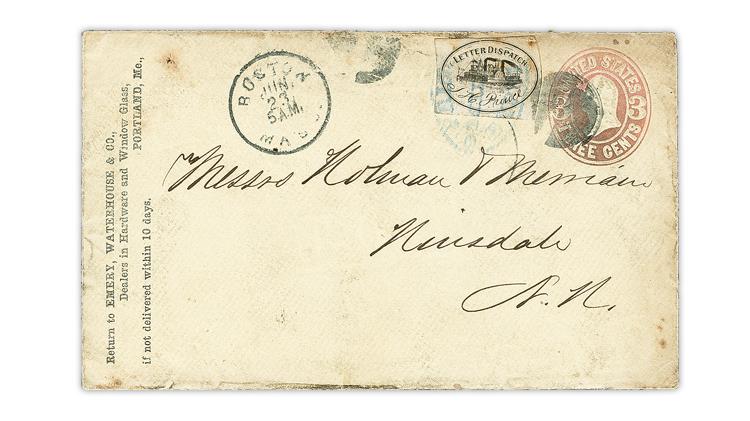 The Koehler auction offers this 1869 cover combining the 1864 3¢ pink stamped envelope with an added 1861 black stamp from Prince’s Letter Dispatch of Portland, Maine. The cover is described as “the only recorded example of this rare stamp used on U.S. postal stationery.”
Previous
Next

The April 19-24 auction series from the Heinrich Koehler firm in Wiesbaden, Germany, offers a broad selection of worldwide material, with several specialized groupings in individual catalogs.

Also featured is the fifth in a series of auctions offering material from the collections of prominent German-American businessman Erivan Haub, who died in 2018. The auctions have been conducted by the five firms comprising the Global Philatelic Network, including Heinrich Koehler.

In the April auction, Koehler presents German states material from the Haub collection.

One remarkable example from this group is the 1850 3-pfennig cherry red stamp of Saxony (Scott 1a) in a postmarked block of four.

A multiple of four is the largest known for this first stamp of Saxony.

This block is struck four times with a black double-ring cancel of Chemnitz dated Aug. 10, 1850.

The block is described as having “full to wide margins except for a minimal touch of the upper margin” (in translation from the Heinrich Koehler auction catalog description).

The translation also identifies the block as “a crown jewel of classic philately” once housed in the collection of eminent U.S. philatelist John Boker Jr., who specialized in German states.

Found among the United States material is an 1869 cover mailed to Hinsdale, N.H., with the 1861 black local stamp of Prince’s Letter Dispatch of Portland, Maine (Scott 122L1).

The stamp on this cover is affixed to the 1863 3¢ pink George Washington stamped envelope, “the only recorded example of this rare stamp used on U.S. postal stationery,” according to Koehler.

The local stamp is tied by a cork marking and by the blue “Prince’s Express 9 Milk St.” serrated oval cancellation.

The main catalog for this sale includes an extensive selection of material from Germany, with additional German states plus Germany after 1945, Europe including French colonies and Ireland, collections and much more.

For the collector of forgeries, the current sale also includes a large number of creations by the famed Italian philatelic forger Jean de Sperati (1884-1957), including proof items enhanced with the artist’s signature.

The illustrated catalogs for the Heinrich Koehler auction series are available for download.