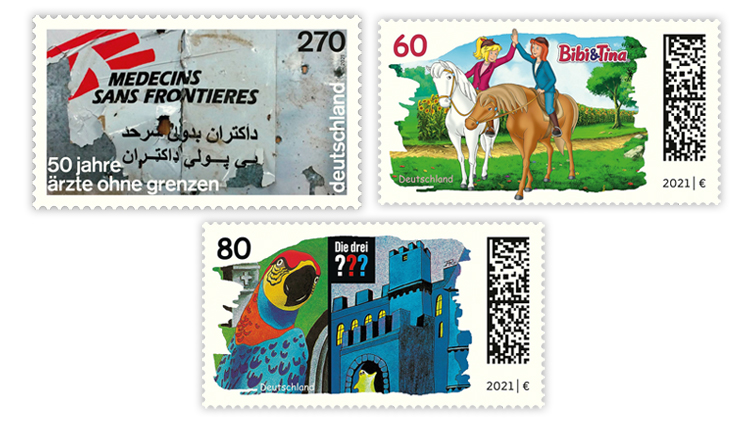 Germany issued its final commemorative stamps of 2021 on Dec. 2 and began 2022 with four stamps on Jan. 3. Doctors Without Borders, Annette von Droste-Hulshoff and David Bowie are among the subjects honored.

This December marks 50 years since the creation of the Paris-based Medicins Sans Frontieres, or Doctors without Borders, in 1971. This group provides emergency medical and humanitarian aid in places where people are at risk due to war and crisis.

Germany’s Deutsche Post issued a €2.70 stamp Dec. 2 for this anniversary.

A press release about the stamp on Germany’s Federal Ministry of Finance website said: “Operation in the midst of civil wars and violence is possible thanks to the neutrality, impartiality and independence of the organization. The teams help everyone without asking about their ethnic origin, religious or political beliefs. MSF [Medicins Sans Frontieres] decides for itself where the help is most urgently needed.”

In an Oct. 5, 2021, message, Doctors Without Borders said: “Six years ago, on October 3, repeated US airstrikes destroyed the trauma hospital run by Doctors Without Borders/Medecins Sans Frontieres (MSF) in Kunduz, Afghanistan. Forty-two people were killed in the attack, including patients, caretakers, and MSF staff members. Even as the attack continued, our colleagues fought for their lives and for the lives of their patients with extraordinary determination and courage.

“This year, despite heavy fighting and political upheaval, MSF reopened a new trauma center in Kunduz to meet the still urgent needs.”

The organization also said, “While both the US and Afghan armies both conducted and released their own investigation and findings, we were not satisfied that an independent, impartial investigation could be carried out by the parties involved.”

The poster shown on the €2.70 stamp is marked with holes of various sizes. Arabic script is present just below the logo, but part of the message has been obliterated from the damage caused to the poster.

Imposed on top of this image is white text announcing the 50th anniversary at the bottom left of the stamp. The denomination, year and country information are on the right.

With so many neutral tones on this stamp, the red Doctors without Borders logo provides a striking visual contrast in the upper left corner.

Germany also issued two stamps, €0.60 and €0.80, Dec. 2 in its Childhood Heroes series. Both stamps include a matrix code on the right side. When scanned with a smartphone, these bar codes provide basic shipment tracking information, as well as information about the stamp and design.

Deutsche Post first issued stamps with these codes in February 2021 and plans to include them on all new stamps through the course of 2022.

The Childhood Heroes stamps continue a series that already features stamps with Pippi Longstocking and Heidi.

The new €0.80 stamp shows images from a popular detective series that translates to The Three Question Marks (called Die drei ??? or Die drei Fragezeichen in German).

Child detective stories seemingly know no boundaries, as they are popular throughout the world. In this instance, the three detectives in the series are Justus Jonas, Peter Shaw and Bob Andrews. The cases that these detectives take on often lead them to thrilling situations.

Even though American author Robert Arthur Jr. wrote the first books in this detective series in English in 1964, the series gained more popularity in Germany. To date, more than 200 books have been published in German, and there have also been a comparable number of radio shows as well as a 2019 feature film.

The title of the series appears in the upper middle section of the stamp. In the design, two images of a castle and a parrot appear side by side. These refer to the first two books in the series: The Secret of Terror Castle and The Mystery of the Stuttering Parrot.

The €0.60 stamp promotes another series that is just as significant for children in Germany. Listeners first met Bibi and Tina together in a radio show in 1991, but a radio show called Bibi Blocksberg had already been on air since 1980.