A strip of three of Saxony’s first stamp, a philatelic gem from 1850, sold for about $30,300 at Christoph Gaertner’s October auction in Stuttgart, Germany. 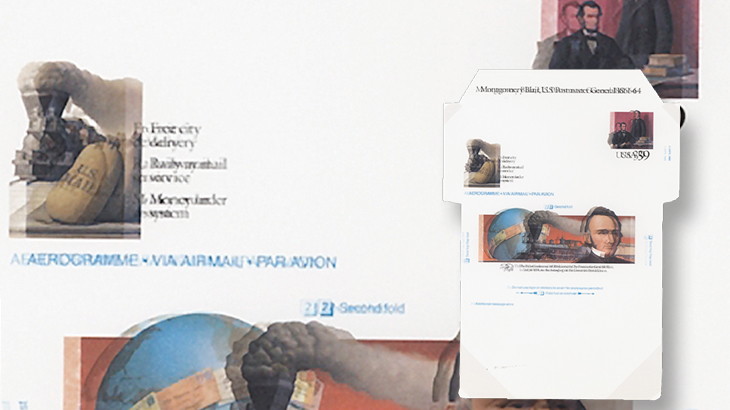 J. Kasper’s collection of United States aerograms sold for $39,300 at the Christoph Gaertner auction in Stuttgart in October. It included the rare 1989 Montgomery Blair 39¢ commemorative aerogram with double impression. 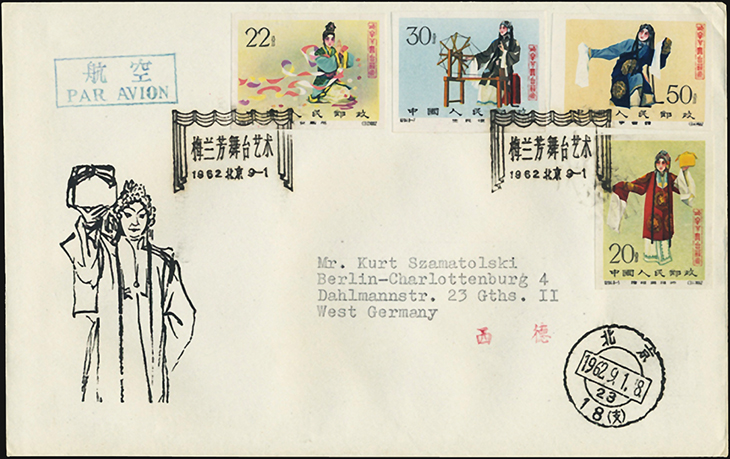 A lot of 188 first-day covers of China issues from the late 1950s and early 1960s brought almost $36,750 at Christoph Gaertner’s sale in October in Stuttgart. This first-day cover is franked with imperforate varieties of China’s Mei Lan-fang set of 1962. 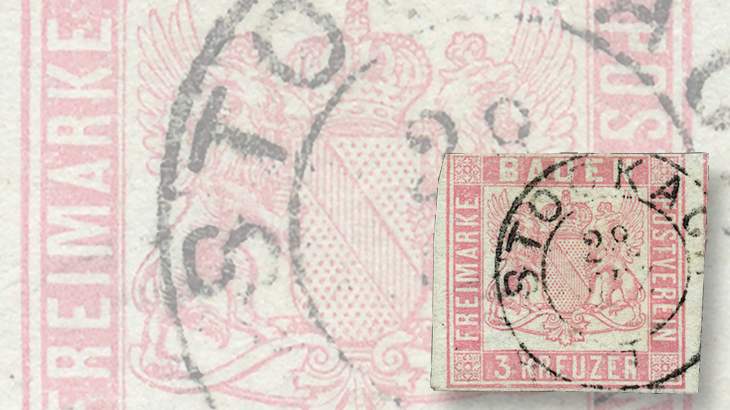 An imperforate Baden 1862 3-kreuzer rose, a seldom-seen old German rarity, sold at Christoph Gaertner’s sale in Stuttgart in October for about $19,300.
Previous
Next

In response to my request for feedback from readers of Auction Roundup, John Stover of San Diego suggested covering more of the large lots and collections offered by many auction houses in the United States and abroad.

While it can be hard to say much that is meaningful about large lots without examining them in detail and describing them at length, there are occasions when a large lot proves interesting. I’ve found a couple in the most recent sale by German auctioneer Christoph Gaertner, who held another of his trademark gargantuan sales Oct. 19-24 at the firm’s headquarters near Stuttgart, Germany.

The Gaertner sale included tens of thousands of lots in a catalog that ran to 10 volumes, ranging from single stamps and covers to large lots and estate holdings, covering the world from old German States to faraway lands, including an extensive array of stamps by topic.

An imperforate Baden 3-kreuzer rose (Scott 20a) stood out as an attractive and collectible example of this seldom-seen old German rarity.

Sometime in 1867 or 1868, an unknown number of sheets of the 1862 3kr stamp in a pale rose shade and lacking the customary perforations were sent to the post office in the small town of Stokach. Some 23 examples have survived; the one in the Gaertner sale was first recorded in 1935.

It bears a double-ring “Stockach/28 Dez.” [December] postmark and has full to large margins on three sides, including a part of the adjoining stamp at right. Although its top margin is cut away, such shortcomings are often forgiven on scarce stamps. The stamp was knocked down for €15,000 (about $19,300), including the 22 percent buyer’s premium Gaertner adds to all lots.

A strip of three of Saxony’s first stamp, the 3-pfennig brick-red numeral of 1850 (Scott 1), was described as a “well-known example” of this Saxony philatelic gem. Several experts’ signatures and marks appear on the small piece of paper to which the strip is tied by three strikes of a double-ring “Chemnitz/8 Aug.” cancellation.

Saxony issued a green 3pf stamp in a coat-of-arms design the following year, making its short-lived inaugural issue scarce. This strip, identified as coming from plate 2, positions 6-8, sold for about $30,300.

Among the worldwide large lots, a group of Chinese first-day covers from the late 1950s and early 1960s did well in the Gaertner sale, bringing close to $36,750. The 188 FDCs represented an almost complete run for the period, encompassing many scarce, colorful commemoratives, including the World Table Tennis Championship souvenir sheet of 1961 (People’s Republic of China Scott 566a), imperforate varieties of the Mei Lan-fang set of 1962 (620-627), and the sumptuous mountain landscapes of 1963 (716-731). Almost all of the FDCs were postally carried to addresses in West Germany.

Gaertner also offered an exhibit of United States aerograms, with essays, varieties, errors and used examples to scarce destinations, all neatly mounted and written up, and described as “an extraordinary collection” put together by one J. Kasper.

The exhibit began with the 10¢ DC-4 Skymaster aerogram of 1947 (Scott UC16), represented by a rare 1946 essay, mint examples of the various printings, including the chocolate error of color (UC16b), and a used example to Tibet with a Tibetan stamp paying local delivery.

Elsewhere in the collection was an example of the 1989 Montgomery Blair 39¢ commemorative aerogram with double impression (Scott UC62a). Just four examples with multiple printing were discovered in 2004. The item is not valued in the Scott Specialized Catalogue of United States Stamps and Covers. The Kasper aerogram collection sold for $39,300.